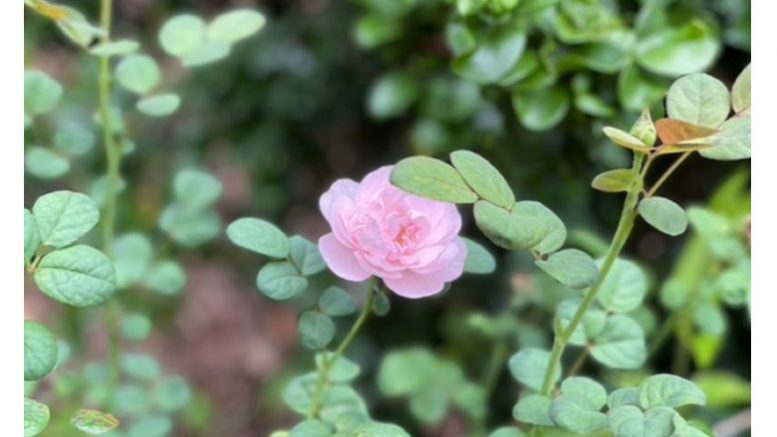 “Queen of Sweden,” a sustainable rose. Photo by Kit Flynn.

A long time ago I became aware that I was a garden hypocrite, something that’s not easy to admit. As with life, many of us find we have to consider a mediation on compromise when developing an accurate garden philosophy. Let me explain.

Thirty years ago, when I was relatively new to gardening, I resolved to try to avoid the use of chemicals that advertisers were then exhorting us to employ. I had lovely soil, a result of taking up the decaying English ivy that had happily occupied the front lawn for over fifty years – and then, like everyone in Chapel Hill at that time, I put in a rose garden that had to receive a chemical dunking every ten days or so. At this point I resolved to use no chemicals outside of the rose garden that was shunted off to a sunny corner. I planted many camellias, both sasanquas and japonicas, which gradually became a major part of the backbone of the garden. I experimented with many perennials while learning that insecticidal soap was pretty effective in fighting aphids and mealybugs. Organic growers approve of insecticidal soap so my garden halo remained untarnished.

I read about the evils of glyphosate, vowing never to use it. How dare that evil Monsanto encourage me to use Roundup! I happen to be a talented weeder who will pull weeds happily out of the ground. And then I met up with Creeping Charlie, Glechoma hederacea. This creeping member of the mint family is a horror to bring under control. In the first place, it’s unpullable (Spellcheck disapproves of that word but I’m sure you understand the meaning). In the second place, it’s a perennial that was determined to remain in my garden.

What did I do? I did the only thing a garden hypocrite could do: I reached for the Roundup. Michael Pollan would weigh in heavily with disapproval.

To redeem myself, I got rid of the rose garden that required incessant chemical sprays, switching instead to sustainable roses that I scattered throughout the garden. This solved one problem while creating a new one: the sudden need for fertilizer. Now if you want to grow roses, no matter how good your soil is, you will eventually succumb to fertilizing them as the cliché is this (and like most clichés, there is much truth in it): Roses are heavy feeders.

My third mishap with organic gardening involved my beloved camellias that en masse came down with an infection of scale. Now these hard-coated creatures are hard to eradicate because their shells protect them from normal warfare. After twenty-five years, these camellias were tall so there was no question of wiping off each leaf and because they are the winter backbone of the garden, there was no thought of letting the scale have their way.

This is where Chemical Steve (as I call him) comes into the story. He came by, shook his head at the size of the scale infestation, but assured me he could take care of it with repeated applications of – that’s when I interrupted him as I had no wish to know what the “repeated applications” consisted of.

Espying my Creeping Charlie crops, he mentioned he could handle them at the same time, thereby giving me the perfect excuse of being able to say, “My hands never touch a bottle of glyphosate.” It is obvious that I have moved from Sort-of-a-True-Believer in Organic Gardening to Hypocrite in three easy lessons.

What truly pushed me over the edge was the idea of losing my glossy camellias to a quarter-of-an-inch opponent. Now Chemical Steve arrives by stealth to inspect my camellias and the former Creeping Charlie patches. I rarely see him, thereby enabling me to be a hypocrite blathering on about the merits of organic gardening. Michael Pollan has thrown up his hands in disgust.

Readers, my defense is that I tried and I’m sorry.