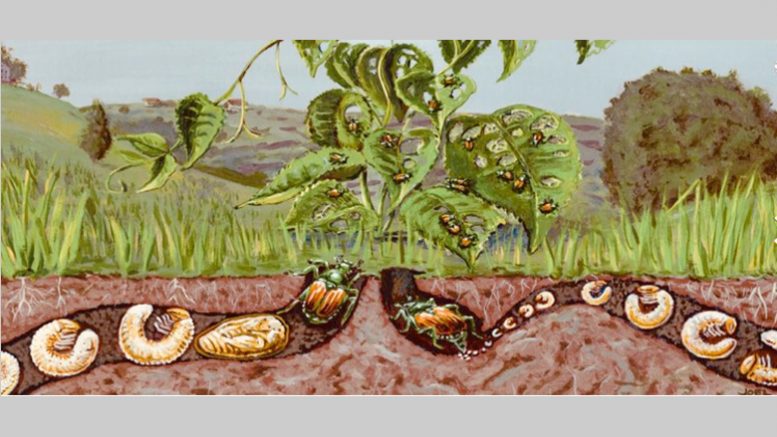 It started with a question posted to our neighborhood forum: “Looking for a company to treat our landscape for pests.” That question turned into a lengthy discussion of ways to eradicate the garden pest having its moment, the Japanese beetle (Popillia japonica).

This insect was accidentally imported from Japan more than a hundred years ago. In its homeland this beetle isn’t considered a pest as it is controlled by local predators, but here it can do a lot of damage.

The Japanese beetle lays its eggs in the summer on the soil surface; when the larvae hatch, they begin feeding on small plant roots near the surface. As temperatures cool, they dig into the soil where they mature into c-shaped grubs. When the temperature warms up, the grubs will emerge as adult beetles.

My neighborhood’s discussion started with questions about the effectiveness of hanging beetle traps, the hourglass-shaped plastic bags with a hormone lure. University studies suggest that the traps are ineffective as they attract the neighboring beetles, thereby producing more plant damage — without significantly reducing the beetle population. Because the traps only trap adult beetles, the lifecycle of the beetles remains intact.

While my neighbors didn’t agree on the pesticides, there was consensus that “something must be done” — calls for “total eradication” and “efforts to save us from this plague” were widely supported. This is where I diverge from my neighbors, I accept some level of plant damage as I’m concerned about the consequences of using chemicals.

My neighbors aren’t alone. Walk into any big box store and you’ll be confronted with a dizzying assortment of garden chemicals, most promising quick results. But the attractive packages bury the unattractive truth in their fine print: using these products has consequences.

Keep in mind that any pesticide, organic or synthetic, is toxic. Both Sevin and Bt have consequences that should be considered.

Sevin: The horror of this product is advertised right on its label; it kills more than 500 different insects. Trying to make potential buyers feel better, these insects are described as “listed pests,” but that’s a lot of death packed in one “no-drip” bottle. Read the fine print and you’ll find caterpillars listed among the likely dead. Without caterpillars in my garden what will the birds feed their young? Am I willing to trade a damage-free garden for silence?

Bacillus thuringiensis (Bt): Applied to the soil, this bacterium attacks the Japanese beetles during their grub stage. Once Bt is applied, it takes a few years to build up in the soil to make an impact, but it eventually will begin to work. The problem is Bt doesn’t discern among the grubs; it can reduce the overall grub population in your soil.

Fewer grubs in the soil mean less food for moles — and what gardener would argue for more moles? But other creatures feed on grubs, including, one of my favorites, the firefly (Photinus carolinus). Am I willing to trade a damage-free garden for summer nights filled with blinking fireflies?

I’ve simplified the choices for the sake of space limitations here, but to garden is to make choices — it’s about more than just what plant to select. Surveying the damage the Japanese beetles have done in my yard, I made my choices for managing them, but then I was confronted with another problem. I’ll reveal my solution in these pages next week so stay tuned.