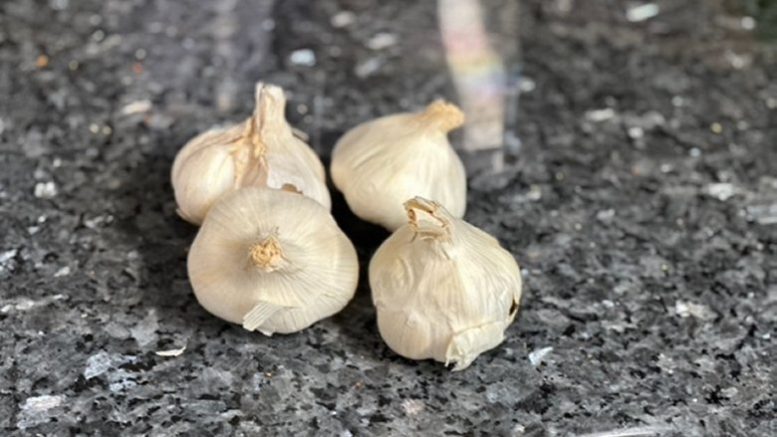 Recently there has been a spate of articles describing the joys of growing garlic, reminding us that now is the time to plant the cloves in the garden. Seven years ago, I hopped onto the garlic bandwagon after reading several newspaper articles stating that growing garlic was one of the major pleasures in life.

Now, while I’d happily purchased garlic from Triangle markets for years, I had never pined to join the yearly Gilroy (California) festival held in homage to the joys of garlic. I was a garlic appreciator, but I was not a garlic junkie. However, the idea that I could grow garlic spurred me on.

It is a truism that newspaper articles rarely give you enough information on such an endeavor. There were several places to start: Growing Great Garlic by Ron L. Engeland is still the garlic growing bible and Filaree Farm has some good information (here). Along the way I learned that garlic, originating in South-Central Asia, has been around a long time as there is evidence that garlic was under cultivation as long as 10,000 years ago.

There are two kinds of garlic: Allium sativum var. sativum—a.k.a., softneck garlic—and Allium sativum var. ohioscorodon, more commonly called “hardneck garlic.” “Elephant garlic” is not a garlic; rather, it is related to leeks, so is not suitable for this discussion. “Softneck garlic” is often referred to as “common garlic” because that is what you’ll find in our markets due to its relatively long shelf life. This is also the garlic that has a neck suitable for plaiting. Amenable to many different climates, softnecks have a formation similar to that of an artichoke. The softnecks also tend to expend their energy upon bulb production rather than stalk and bulbil (aerial cloves that appear on the scapes of hardnecks) construction. Softnecks also produce more cloves, albeit smaller ones, than hardnecks.

It rapidly became apparent that I was turning into a garlic snob. After all, why buy a variety that is commonly found at Harris Teeter? Hardnecks were clearly the way I wanted to go. There are three different types to choose from: (1) Rocambole Garlic is similar to softneck, but it throws up a scape that twists into a loop and produced very little parchment; (2) Purple Stripe Garlic has thick white skins with purple streaks; and (3) Porcelain Garlic that has fat cloves covered by a heavy white skin.

By now I was on a roll. Knowing that I wanted hardnecks, I then turned to The Garlic Store website as that was the website the one newspaper recommended long ago. I scrolled through the 38 varieties offered—it was obvious that these people were passionate about their garlic. When I finally placed my order, I noticed that if I ordered $50.00 worth of garlic cloves, I would receive a free gift. Money was no object, nor did I have an ounce of shame. How could I resist a free gift?

A large box of garlic cloves finally arrived from Colorado. I can only say that $50.00 buys a lot of garlic cloves, so I turned my attention to how to plant them. Garlic requires good, well-draining soil with a slightly acidic pH. The cloves should be sown one inch beneath the surface, four inches apart. Add a 10-10-10 fertilizer and mulch well as garlic needs moisture but doesn’t appreciate a soggy terrain.

The tough part is determining when to harvest the bulbs. The Garlic Store told me to harvest when the lower third of the leaves had turned brown while the upper part was still green. One expert advised harvesting when the green leaves are down to four in number; others suggested that all the leaves needed to turn brown.

The only thing everyone agrees on is that there is danger in waiting too long to harvest. An overmature bulb is in danger of splitting, hastening decay. To harvest your crop, use a pitchfork as pulling on the scapes will cause them to break. Fresh garlic is surprisingly mild so it should be cured if it is to taste like garlic—presumably this is one of the reasons you’re growing it.

To cure garlic, let it dry out, without washing, in temperature between 70°-75° for two weeks. After the curing process, you can cut off the scapes and the roots.

This is what you should do. What I did was … to lose interest. That particular September was hot; the free gift was extra garlic cloves (just what I didn’t need); and I was tired. Consequently, because I was swimming in garlic, I couldn’t visualize ever needing any more—and I didn’t feel like preparing garlic beds in my full perennial garden. Simply put, the time for instant gratification had come and gone.

I stared at the garlic overflowing its box. I put about one-quarter in the ground without checking on the pH and without marking their placement. I failed to apply fertilizer and mulch. I even managed to forget which varieties I was planting. My pioneer spirit had evaporated, and the remaining unplanted cloves ended up in soups, pesto, and stews.

The following late spring, my heads were small. Should I have fertilized them? Probably. Should I have checked the pH? Probably. When I go to the California farmers markets and spy their large garlic bulbs, I drool—and I now appreciate how hard it is to reach perfection in growing these particular alliums.

The Trials and Tribulations of Purchasing a Tesla