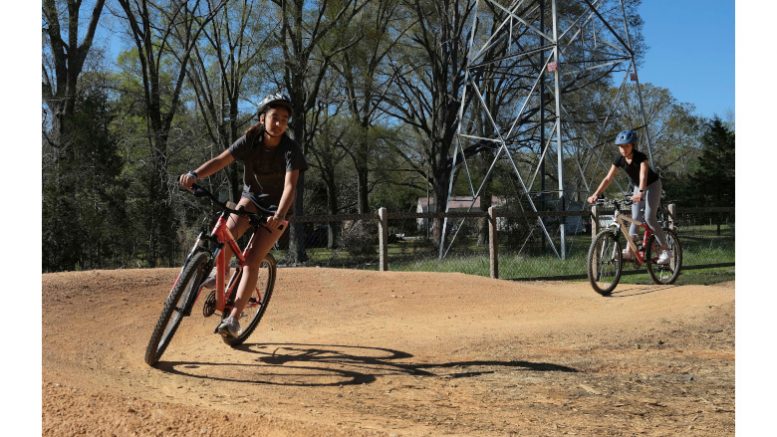 The trick, said cycling instructor Tamara Sanders, is to use your bike and body in response to the terrain to keep the bike moving forward. Once you get the timing right, you can glide over the rollers and around the berms without pedaling. It’s called pump track riding, and like all things on two wheels, it takes patience and practice to master.

First offered last fall, the class has drawn riders as young as four. Most are between eight and twelve. Sanders assesses riders’ abilities and tailors her teaching to suit individual needs and goals. Her challenge, Sanders said, is to create a group dynamic that allows riders of different ages and abilities to feel at ease and supported.

Every class begins with a safety check to make sure helmets are properly adjusted and bikes are working right. Most riders use mountain bikes or BMX bikes. Any bike with tires wide enough to grip the surface of the track will do.

To help create a culture of support among participants, Sanders has them rename the bike moves they’re trying to learn. Stand on the pedals with your knees flexed, as if you’re ready to spring into action is too long. The girls in Sanders’s recent class shortened that to “Ninja!” Use your arms to push the bike over the roller became “Muscles!” Use your hips to thrust the bike forward became “Boogie!”

It took some doing to get the track built. Sanders, who has managed The Clean Machine bike shop since 2008, began advocating for the project to Carrboro’s Board of Aldermen (now Town Council) in 2013. The park’s dirt-surfaced track, which includes circuits for beginners and intermediate riders, officially opened on Martin Luther King Day in January, 2020, though eager riders started using the track as soon as it was finished in late 2019. The proposal for the track met with enthusiasm in most quarters, but some neighbors of the park were skeptical, worried about the element the track might draw. That element, as it has turned out, consists mostly of kids having safe fun on their bikes away from cars. The track has received so much use that it is now ready for its first resurfacing, and some folks are looking for a spot to build another one.

One of the great things about the track, Sanders said, is that it can be used by riders of all ages and skill levels. “It’s like playground equipment that isn’t age-focused. Younger riders can teach older riders things. You see a lot of respectful interaction out there.”

Sanders wanted to offer a class for girls to avoid the showing-off and other distractions that often arise in mixed groups. “It can be hard to go out on the pump track and practice and enjoy it when you’re the only girl out there,” Sanders said. “You feel like you’re carrying the weight of all girls and want to show” — in a sport dominated by men and boys — “that girls can do a good job.” A girls-only class, Sanders added, takes this weight off girls’ shoulders.

While the pump track class is pitched to beginners, some riders, Sanders hopes, will continue to develop their skills and join one of the many National Interscholastic Cycling Association (NICA) teams in the Chapel Hill/Carrboro area. Or perhaps connect with Triangle Off-Road Cyclists (TORC), which hosts Ride Like a Girl events. Rising stars might even set their sights on the Red Bull UCI Pump Track World Championships.

This summer Sanders will run a four-day cycling camp (also offered through Carrboro Rec and Parks) for girls who want to learn riding skills and how to maintain their bikes. Tentative plans are to offer the girls pump track class again in the fall. In the future, Sanders would like to offer a class that includes young people who identify as non-binary.

As a teacher, Sanders enjoys figuring out on the fly what riders need to learn and grow. “I like connecting with people,” Sanders said, “and seeing what best motivates them to learn, and how that plays out in a supportive group process. It’s great to be part of that learning community myself.”

The pump track is ordinarily open the same hours as the park: 7:00 a.m. to dark. Take your kids and their bikes — take a bike of your own — and give it a try. You just have to learn to boogie.