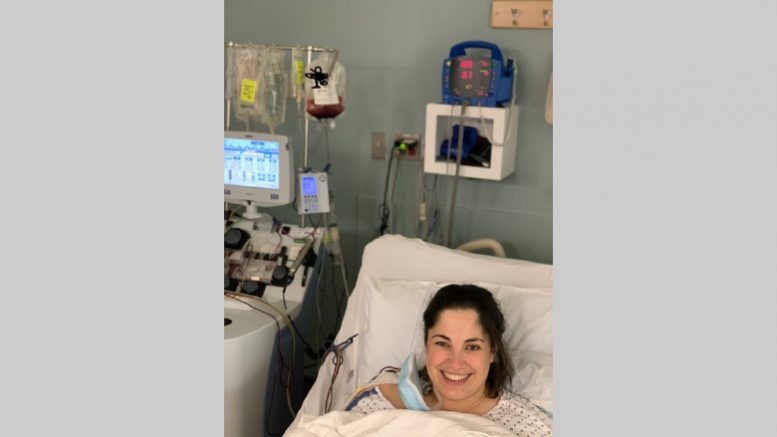 Melody Kramer was filled with energy as she got out of her car that early October morning.

The Chapel Hill resident was nervous, just as she was before giving birth years earlier. But this was different; the medical procedure she was about to endure, no matter how routine or safe, felt daunting.

Donning a surgical mask and a white speckled hospital gown, Kramer walked to interventional radiology — the place patients go when the veins in their arms don’t stick out enough — so that she could have a port placed in her neck.

Before she was injected with pain medication to dull the sting, Kramer’s journalist instincts kicked in: she declined to listen to music as many patients do and instead asked the nurse to explain each step of the procedure.

By the time the nurse placed her port, Kramer’s wife had returned from dropping their kids off at daycare. Kramer was hooked to a machine that looked like a small washing machine, and it began stripping her blood of the extra stem cells she produced.

More than anything, Kramer, the Carolina Population Center’s director of communications, was excited. After two months of planning, tests and outreach, the day was finally here for her to donate her bone marrow to an anonymous recipient.

As she sank into her hospital bed, giving into the medication-induced drowsiness, Kramer willed her body to empty enough healthy cells into the clear bag hanging above her.

Years earlier, during her time at the University of Pennsylvania, Kramer was a vital member of the Penn marching band. In the band, she quickly befriended Kevin Rakszawski, a talented musician who stood next to her in the trumpet section at Franklin Field for Saturday football games.

Between her dad’s Friday chemotherapy appointments and the empty space Rakszawski left in the trumpet section during his recovery, cancer became a constant in Kramer’s college life.  Kramer wanted to do more for the thousands of patients that are diagnosed with lymphatic cancers each year.

So, she did what she did best — she wrote.

On the Friday before homecoming in 2005, Kramer shared the stories of Rakszawski and her dad on the pages of her school paper in an impassioned plea to visiting alumni to join the National Marrow Donor Program. “You share things like fight songs and traditions and camaraderie,” she wrote. “What if you shared your bone marrow, too?”

The stories she told resonated with her university community; she signed up 200 new potential donors for the registry. And, of course, she also registered. With a quick cheek swab, her genetic information was thrown into a database with what is now 22 million other donors.

The chances of getting called to donate are one in 430, said Kate McDermott, public relations specialist for the Be The Match program.

Kramer didn’t think much more of it. Why would she, with odds like that?

Today, Kramer and her wife work next to each other in their spare bedroom-turned-home office in Chapel Hill. Their desks are made of the same butcher block material, but that’s where the similarities end. The desk belonging to Kramer’s wife, who asked not to be named, is neat and organized. Kramer’s is cluttered with papers and yesterday’s coffee mugs.

Despite her messy workspace, Kramer excels at organizing around big ideas. “She really thrives when she can come up with an idea and just pull in people from these different networks and communities,” her wife said. “She can spin this new thing out of nothing.”

It was in her office that Kramer got the phone call as she worked, protected from the blistering July heat outside. She went silent and her eyes widened.

Exactly 19 years after her dad’s 2001 diagnosis, Kramer was matched to a patient who needed a bone marrow transplant. The recipient and the donor stay anonymous for a year after the transplant, the person on the other end of the phone said, so Kramer wouldn’t know who she was donating to. They needed to run some more tests to confirm she was still a match.

“Yes,” Kramer said over and over as the caller explained possible next steps. “I want to do it. I’m on board.”

Her wife, who still didn’t know who was calling, said it sounded like she’d won some magical prize. In reality, “she got to take uncomfortable shots for five days and spend six hours hooked up to a crazy machine that took her blood.”

The process from the initial match to the actual procedure is slow and relatively hands-off. Kramer knew about her selection for more than two months before she donated.

In the meantime, she reached out to her social media network for advice and to document her experience. She reconnected with her old friend from college, Kevin Rakszawski.

After college, Kramer and Rakszawski went down divergent paths. Kramer took her knack for storytelling to NPR, National Geographic and the population center, with a fellowship at Harvard and an appointment in the Obama Administration thrown somewhere in between.

Rakszawski went to medical school and specialized in oncology and hematology. Some of his patients in Hershey, Penn., today have the same cancer he battled less than two decades ago. He walks patients through bone marrow transplants weekly.

When Kramer announced her upcoming donation on social media, Rakszawski had both personal and professional advice. He’d had his own bone marrow extracted and saved years before in case his cancer returned. He told her about the side effects and how you just kind of sit there while your blood is removed, filtered and replaced. A bone marrow transplant isn’t nearly as exciting for the donor as it sounds.

He advised her to take Claritin when she started the shots she’d have to take leading up to the extraction. For some reason, it helps with the bone pain. Rakszawski said no one really knows why.

Armed with new information and a donation date, Kramer took to educating her Twitter followers about what she was experiencing. She set a goal reminiscent of the one she set in college, only amplified by her years of experience: she wanted to sign 500 potential donors up for Be The Match, which manages the largest marrow registry in the world.

Her efforts, which have almost reached their goal, are especially important this year, as holding in-person donor drives is nearly impossible during a global pandemic.

Sarah Todd, a senior reporter at Quartz, was one of more than 100 people who wrote to Kramer to say she registered.

Kramer kept tweeting, climbing toward her goal. Then, a week before the procedure, she signed off.

Explaining a bone marrow donation to a toddler is as comical as it is challenging. Kramer was charged with trying to help her children understand why she had to take shots and why she was going to the hospital.

“My 3-year-old thought I was giving all my blood away,” Kramer said.

The donation became a family affair. Kramer or her wife would administer two shots every morning into her stomach and thigh that would stimulate her body’s stem cell creation. Her 3-year-old helped put on the Band-Aids. Her 1-year-old watched.

As her stem cells went into overdrive, Kramer’s bones began to ache. She was tired and mentally preparing for the donation. She had to be extra cautious about any potential exposure to COVID-19. She made a playlist of podcasts with the help of Twitter.

For four hours on the day of her donation, Kramer lay in her hospital bed, staring at blue walls and the nurse’s station. Her wife watched a movie. By mid-afternoon, she was done.

With the pride of a mother holding her newborn baby, Kramer lifted a see-through bag filled a third of the way with a murky purplish liquid. Her fear of not producing enough melted away; her body had done exactly what she needed it to do.

Kramer didn’t think about that, though. The pain and the uncertainty were far from the front of her mind.

In her hands was the product of love and commitment and her dad and Rakszawski’s perseverance.

In her hands was someone’s second chance at life.

This story was provided by Media Hub, a project of students at UNC-Chapel Hill’s Hussman School of Journalism and Media