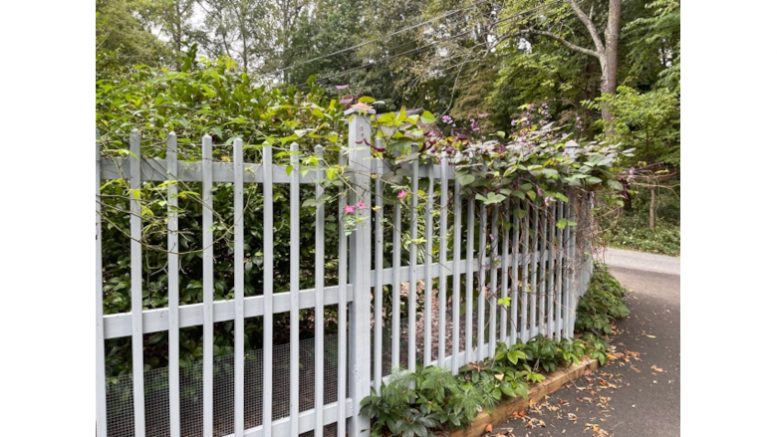 On a daily basis I bless my fence. When I first moved to Chapel Hill over one-quarter of a century ago, deer were not a problem in my neighborhood, one that borders downtown. I happily nourished a rose garden while growing daylilies and hostas to my heart’s content.

However, with the increase in development around town and concomitant loss of deer habitat, my roses and daylilies began to disappear while the hostas burnished torn, ugly leaves. After the initial shock, I realized that deer had moved into the small woods that exist behind my street. There were no rose blooms, despite the thorns, while the daylilies quivered in dread (no exaggeration).

I tried everything: I bought gallons of deer repellent, I pored over lists of plants that didn’t attract deer, and even invested in coyote urine while spraying everything in sight. Now spraying daylilies requires constant vigilance as the flowers only last for a day with new ones springing up overnight. During daylily season spraying became a daily occurrence – and was an abject failure. My deer appeared to relish the spray, some of which stank to high heaven or was so sickly sweet that it was equally repulsive.

I grew ornamental grasses, keeping the dogs clear of them as the burrs can wedge themselves deep under the dogs’ skin. I planted hellebores and two different rather horrid euphorbias that were bound and determined to take over the whole garden. It was a frustrating experience as I couldn’t grow what I wanted to grow – and the resulting garden looked dreadful. In short, I had fallen victim to the diet of the deer.

After putting up with this for several years, I finally turned to my beloved builder, telling him that I needed a good-looking fence and I needed it yesterday. A good part of my property faces the street so I needed a strong attractive wooden fence along that portion for the sake of appearances. Surely my neighbors wouldn’t object to a decent-looking fence within their eyesight.

Along the side of the yard that didn’t face the street, he erected an eight-foot-high deer fence, using the strongest grade possible. As it wasn’t visible from the street and was basically hidden by shrubbery, the deer fence passed muster.

The solution proved to be rather simple. My builder stapled a stiff wire mesh around the bottom of the wooden fence, thereby keeping out the copperheads. I was on my way to becoming a happy gardener except…

The rabbits arrived as they could hop over the mesh and they chewed holes into the strongest grade deer fence. Do you have any concept of how destructive Peter Rabbit can be? Another layer of stiff wire mesh was added to both fences, thereby saving me from turning into Mr. McGregor.

Now deer can happily jump over eight-foot-high deer fences. Six-foot-high wooden fences are, thus, a piece of cake to them. For some reason, though, they have never tried to jump either of my fences despite the fact I specialize in growing deer candy. I think this is because my neighbor and I noticed their daily route extending from the woods into the neighborhood and we elected to leave it open. It’s important to note their routine paths as deer are creatures of habit.

Several years ago, my neighbor asked me if he could attach his deer fence to my deer fence. The only problem was that the daily deer promenade occurred along the passageway bordering both of our properties. I suspected that, were we to block this path, the deer would begin jumping the fences. My neighbor and I proceeded to do that which we can no longer do as a nation: We reached a consensus. He erected his deer fence, leaving a four-foot-wide passage for the deer between our two properties – it cost a bit more but saved us both from the pending disaster of having deer jump our fences.

It’s an amazing luxury to scan a garden catalogue without having to think about deer or rabbits. There is one problem, however, with having an effective deer fence: I’m often asked if a particular plant is deer-proof. Living with these marvelous fences for 10 years has rendered me totally ignorant so I do what you all do: I quickly Google the plant’s name to find out.

Start With Your Soil

Be the first to comment on "Good Fences Make Good Gardens"