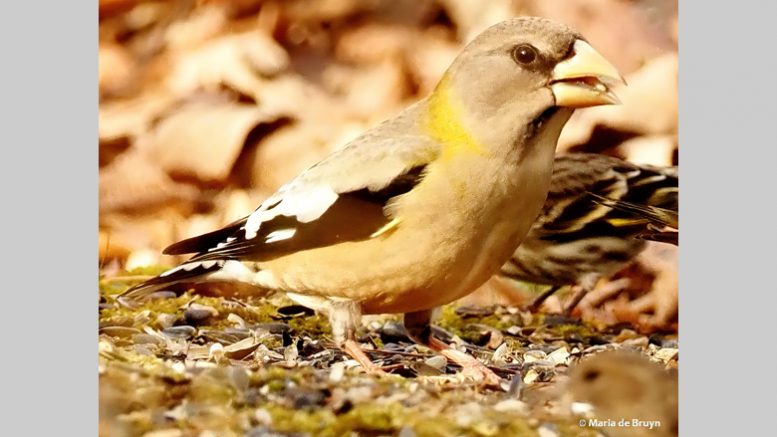 If you know birders, you may have heard that this 2020-21 winter season marks an “irruption” year — a period when large numbers of different bird species migrate to places where they’re usually not seen. This year is especially notable because it is one of the largest mass migrations that has taken place in about 25 years.

Why are these birds coming here? A combination of factors has conspired to reduce their winter food supplies. Some species eat specific seeds while others eat a variety; for all of them, seed shortages have occurred due to insect infestations, low seed production by multiple types of trees, fires and drought. In addition, some birds had large increases in their populations during previous years, when seed production was high, so more of them are competing for the same food sources.

The scientists who study irruptions are calling this season a “superflight,” because many species in the finch family have been moving south from the boreal forests of the northern U.S. and Canada. Here in the Piedmont, we’ve been lucky to see several of them, including the stunning evening grosbeaks.

The females are subtly colored in shades of gray and olive with touches of green and yellow on their flanks, neck and near their throat (above photo). Their wings are marked with black and white patches. The males are eye-catching due to their vibrant yellow and black plumage, featuring a dark yellow stripe over the eyes and a bright white patch on black wings. Both females and males have very thick, conical bills.

In the summer, the evening grosbeaks eat insects, including the spruce budworm, which is a tiny caterpillar. Their winter diet includes large seeds, berries and tree buds; maple samaras (papery winged seeds) and sunflower seeds are favorites (especially the gray-striped kind).

In 2018, a few evening grosbeaks were spotted in the Triangle but not many people had the chance to see them. This year, they’ve been spotted at some nature reserves and a few private yards. The most reliable large flock has been present at the home of Triangle bird enthusiasts Leto Copeley and Bert Fisher. This lovely couple has allowed birders to visit their yard by appointment (with limited numbers of visitors wearing masks in a large area). Bert kindly updates everyone on the birds’ comings and goings. Their number has been increasing over the past weeks, with a couple high counts of more than 60 birds seen at one time. They often sit high in the trees of the wooded property and then suddenly descend to sit in groups on platform feeders and to pick up fallen seed on the ground.

Seeing so many is a thrill, especially since the numbers of these birds have been falling. Between 1966 and 2015, their population declined by 97 percent in Eastern Canada and the U.S. Continued logging of forests, aerial spraying of insects and climate change may further decrease their numbers in coming years.

Some evening grosbeaks can live well into their teens; the oldest banded individual was found when he was 16 years and 3 months. Perhaps some of those visiting us now have been here before during food-poor periods up north. It will be interesting to see when they next decide to visit our area in future years.

In my next column, I’ll introduce you to some other irruption visitors.

Be the first to comment on "Gorgeous Grosbeaks Gathering"