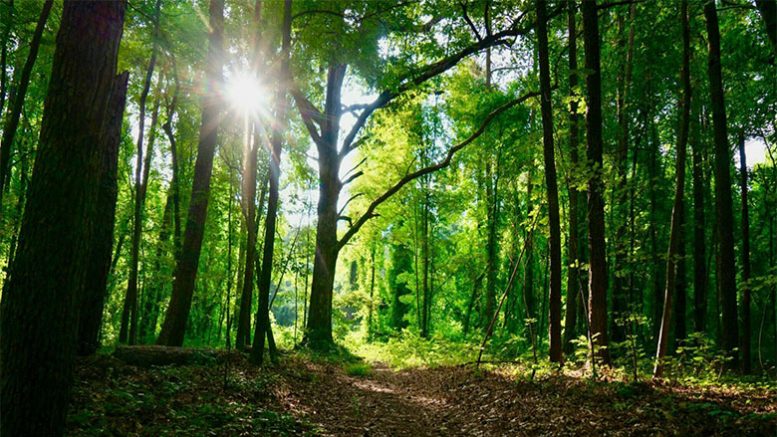 More than 100 area residents, elected officials and staff from Orange County, Chapel Hill and Carrboro met at the Rogers-Eubanks Neighborhood Association Community Center on Edgar Street from 2 to 4 p.m. Sunday (yesterday) afternoon for an Open House on the future of the Greene Tract parcel. How the 104 acres, which is jointly owned by the three governmental entities, will ultimately be developed — or not — has been a matter of contention among various groups looking to balance interests that include preserving the natural areas, constructing affordable housing and possibly a school and more commercial uses. The gathering was an informal opportunity for the public to mingle, view informational posters and ask questions of the elected officials and staff planners attending.

The 105 attendees who signed in when they arrived at the outdoor event on the windy afternoon were invited to write their comments on cards, which will be compiled by staff and shared at the next public meeting, to be held virtually Monday evening (tonight) from 5:30 to 7:30 p.m. At this upcoming virtual meeting, staff will present information on the history of the parcel and the current resolution being considered for its future use. The public may comment during the virtual meeting and a facilitator will be on hand to ensure everything runs smoothly, according to Ashley Moncado, Special Projects Planner for the Orange County Planning and Inspections Department.

You can register for the virtual meeting here.

“This [open house] was really to kind of see how many people are going to come out. How is this going to work? Are people going to be comfortable with this setting?” Moncado said. “And it seems like it’s been successful. Once we move forward we’re definitely going to have more public meetings and we’re going to talk about transportation and talk about the trails and the greenway system and talk about what’s the housing going to look like and meet with our affordable housing providers. We’ve gotten off track [with the public input process] because of COVID, unfortunately. So we need to get back to that.”

Moncado said she hopes to post the information presented, all the public comments gathered at both public meetings and the recording of Monday’s virtual meeting on Orange County’s webpage devoted to the Greene Tract. by Tuesday morning.

Recently-elected Chapel Hill Town Council member Adam Searing said he had expected Sunday’s event to be more like a public forum with the opportunity for community members to speak publicly about how they would like to see the parcel used in the future.

“I was looking forward to just sitting in the back and listening and hearing what people had to say. Maybe we will in the future. I sure hope so. This is very disappointing,” he said. “I’ve talked to a lot of people here. I got a chance to say a lot during the campaign and I got elected and now I think my role is to listen.”

A tale of two plans

The core of the disagreement arises over new plans that seem to supersede earlier work on what the surrounding community would like to see on this acreage. In 2016 a group of community stakeholders published the culmination of nine months of study of what they saw as the optimal use of the parcel. In their report, ‘Rogers Road: Mapping Our Community’s Future,’ 20% of the tract is devoted to affordable housing while preserving the remaining 80% as a natural area. Since the release of that report, a new plan was ultimately embraced by the various government entities that have jurisdiction over the tract. This newer proposal involves developing 66 acres of the site, preserving 22 acres as open space and using the remaining 16 acres for a school and recreational site.

Larry Reid and Sally Council, two members of the 2016 task force that authored the ‘Mapping Our Community’s Future’ report, attended the open house Sunday. They expressed dismay over the current contentiousness and said they did not know the genesis of the new plan.

“I’d like to see us working back to the sense of unity and togetherness [of the 2016 plan],” Council said.

Also among those who attended the Open House was the Smith Middle School mountain biking team, who rode up on their bikes. Chapel Hill native Laura Roe, who was accompanying the middle school group on her mountain bike, said she recognizes that the Greene tract land probably will not be fully preserved, but she hoped that more of the parcel would be preserved as green space that is accessible to all in the future.

“We need to think of this holistically,” she said, noting that change is inevitable. “We can’t be in denial that we are going to grow and that we will have building. However I do think there is a way to do it in a responsible way.”

Abel Hastings, a member of Neighbors United Around the Greene Tract, a group that sought to find a way forward that included affordable housing development along with a forested park, had hoped Sunday’s event would shift the conversation toward identifying ways to do both.

“This would address both our housing need and start to make up for our woeful lack of town parks and public land as compared to surrounding communities,” he said, adding that the discussion has become so polarized meaningful progress seems difficult. “I believe there is a win-win for the community that includes a significant [amount of] development and includes the development of a forested park if only we can find a way to shift the conversation back to finding the best way to do both.”

He also noted that elected officials often cite the cost of land as a prohibitive issue for affordable housing development. The community group, Friends of the Greene Tract Forest, however, has donors willing to commit “significant amounts of money to purchase the conservation easement for 80% of the property because they see the societal and environmental value in the preserved land,” he said. “Selling the conservation easement for 80% of the Greene Tract to one of the donors we have talked with or other donors would preserve the land as a park and give the local governments money to spend on development of the remaining 20% (33 acres). This would allow us to build another Weaver’s Grove and have the community’s best forested park. I’m not sure why this isn’t being explored by elected officials, but it may be a casualty of the polarized rhetoric.”

County planner Moncado said the next step in the process after Monday’s virtual public hearing will be next Tuesday, Nov. 16, when the Orange County Board of Commissioners and the Carrboro Town Council will consider a resolution on a conceptual plan incorporating the newest proposal for the Greene Tract. On Wednesday, Nov. 17, the Chapel Hill Town Council will consider the same resolution, Moncado said.

Several open house attendees were outraged that the resolution would be considered before the newly elected Chapel Hill Town Council members are seated. Searing was an outspoken opponent of the more heavily developed plan for the Greene Tract and he will not be sworn in until Dec. 8 and will attend his first Town Council meeting in January.

“I will be extremely disappointed in our process and our town if an issue that was such a huge issue during the campaign and when I was elected by talking about that issue . . . was just rammed through,” he said. “I certainly hope that’s not the case. I would be extremely disappointed if that was the case. And it would be a rebuke, I think, to a lot of people who voted in the election. Like they thought they’d have more of a say and that’s why they voted for me.”

Matt Roe agreed: “The point…about this being scheduled, fast-tracked before the new town council members get seated is really an egregious abuse of how the electoral process should work and the elected representatives should be the ones driving this. We’re going to speak pretty loud to that.”

The Triumph of the Hypocrites