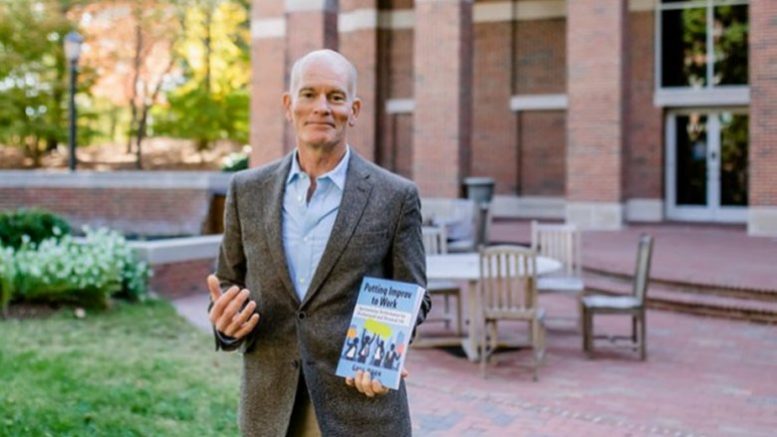 Homegrown improv returns to Carrboro for Valentine’s on Feb. 17 at the ArtsCenter with The Love Show Musical by Actors Improv.

The Local Reporter (TLR) last covered improv in December with this story of two holiday shows, one of which introduced Greg Hohn’s talents to locals and visitors not previously acquainted with them.

TLR returns here with an interview with Hohn, the director of Actors Improv, one of its main performers, a professor at UNC’s Kenan-Flagler Business School, a big band jazz singer and an author.

His book, Putting Improv to Work: Spontaneous Performance for Professional and Personal Life, was released by McFarland Press in 2022.

The following email exchange has been edited for clarity and length.

Actors Improv Theater (AIT, formerly Transactors) has been around since 1983 and has toured nationally and in Canada. You’ve been its director since 1996. How do you explain the longevity?

As tempting as it is to say something pretentious here, I think I’d credit low overhead. We’ve never had a physical plant or employees. We pay our artists as contractors based on revenue we earn from programming. So, we never go into the red and can survive things like the pandemic. I like to think of us as the cockroaches of the theater world (dreamy, huh?) because we shrink or grow based on what sustenance is available.

That said, we’ve constantly tried to expand what is possible in improv. We’re ambitious and we explore new techniques and themes. For example, we started doing full-length improvised musicals back in the ’90s. I think this keeps us inspired and our audiences interested. We’ve also had some deeply committed members who have kept the company going through difficult changes.

Improv keeps growing in popularity and that’s great to see. We were doing improv when it was a rarity and perhaps, we drew well because of its novelty.

Some improv groups cleave to the specific teachings of certain improv directors. We’ve always considered ourselves to be a hybrid of many influences. What we like we throw into the mix along with our own innovations. Improv is commonly associated with comedy, but you tackle spooky material, love, big city dreams, family road trips, and even sci-fi while being hilarious and there’s live music of some kind. Music in improv is hard to nail. What’s the secret sauce for bringing such diversity to the act?

I think we are very funny, but we try to let the comedy emerge on its own rather than focusing exclusively on or forcing it. This is how I approach scripted comedy as well. There is a whole world of emotions and experiences to explore and that’s what we want to do. It keeps things interesting for us and, I hope, for our audiences.

Moreover, if you’re only going for the funny in an improv scene, that funny had better get a laugh. And if it does, then what? You’ve made your joke; where do you go from here? If you play a scene and character with heart, you can build something. You have a foundation that sustains the scene. Then, if the scene becomes funny, it becomes funny. If not, it can still be interesting or poignant or sexy or creepy or whatever.

Just about anything is fodder for comedy. We’ve had rehearsals when we focus on being serious and even tragic, and we wind up laughing our asses off. I think improv can be thrilling for audiences because there is so much tension about what will happen, both for the characters and the actors. Tension is often released through laughter. That is, people will laugh not necessarily because something is funny but because it is exhilarating.

As for music, that just adds another element of artistic expression to the show. Background music helps set the tone in improv just as it does on screen. And breaking out into song is a way of exploring the emotional world of characters. It’s objective absurdity but subjective verity. Making up songs on the fly is challenging but understanding song and lyric structure helps, as does experience.

You write, direct and act in scripted shows but have doubled down on improv it seems. What does improv bring to you as a performer that scripted material doesn’t?

I haven’t done much scripted stuff of late. I like the thrill of improv, of being one of the creators and performers in the moment. We don’t know where things are going any more than the audience does and that’s a roller coaster ride.

Staging a play can be extraordinarily gratifying but, for me, by the end of a run, the bloom is off the rose. The most exciting parts are discovering things about the characters early in rehearsal and then the first interactions with an audience, in other words, the most improvisational aspects.

You’re a jazz singer. Jazz is highly improvisational. How do these two worlds connect for you?

Almost all jazz is based on existing melodies with improvisations from them, while most theatrical improvisation is more open. So, jazz artists might play and riff off “I Got Rhythm,” for instance, but stage improvisers aren’t doing parts of Death of a Salesman and riffing off them. There is free jazz, which doesn’t work off existing melodies.

Most of my singing is with a big band, Triangle Jazz Orchestra, and there’s not a lot of room for vocal improvisation in those arrangements.

Your work extends beyond the stage to UNC-Chapel Hill’s Kenan-Flagler Business School where you teach applied improv. Tell readers about the emotional intelligence boost improv can provide.

There is so much I could say here but I’ll start where I start in the classroom. Good improv is first and foremost about paying attention to others. You have to listen, watch, and care. This engenders trust, understanding, affection, and collaboration. Getting outside of your head, your ego, and into the world around you opens up a world of possibilities, from the practical to the profound.

You’re the program director for FIZ, which develops soft skills by placing improv in work settings. What are some of the life skills participants can walk away with?

What I often hear back from participants is that applied improv helps a person to be more dynamically and unapologetically who they are and more fully engaged in and responsive to the people and world around them.

What can you reveal about AIT’s upcoming The Love Show Musical at the ArtsCenter?

It’s our annual Valentine’s Day show [but on Feb. 17]. The show will consist of five “medium forms,” discrete scenes lasting 10-20 minutes each that explore a theme, character, or place.

This article was updated Jan. 27, 2023, to correct the lead photo courtesy line. Courtesy attribution for the photo The Tyranny of the Minority

Be the first to comment on "Greg Hohn: Master of Improv for Work, Love and Life"