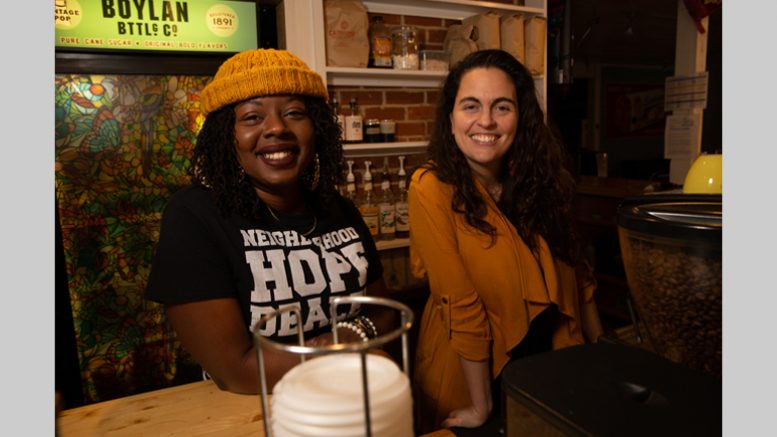 Soteria Shepperson and Sophie Suberman, the founders of Grow Your World, at the Present Day on Main coffee shop they own.

Suberman — a co-founder and executive director of Grow Your World, a Carrboro-based nonprofit that is a community engagement and development program for elementary and middle schoolers — was gifted with the creamy custard by the parent of two GYW youth.

Before being surprised by the flan, Suberman had given the family blankets and books centered around social justice and identity.

“That is what Grow Your World is,” Suberman said. “When we can open ourselves to having what we have and not having what we don’t — and being able to give and receive — we win.”

The nonprofit offers various services for young people such as professional mentoring, relationship, communication and conflict resolution, mindfulness, centering and stress reduction in addition to tutoring and homework help. Its mission is to “create ways for more individuals to be involved for shorter periods of time, allowing youth to get supported in meaningful, fun and realistic ways.

Suberman and Soteria Shepperson, who are also the co-owners of Carrboro’s Present Day on Main coffee shop, co-founded GYW in January 2019. Shepperson and Suberman grew up very differently, Suberman said. But they both agreed that the adults in their lives had a profound impact on their development.

“I grew up with a nanny picking me up after school,” Suberman said. “I had all kinds of support as a kid. The model of a small group getting picked up after school where you could all be in the car together with the person who wasn’t your parent who could be a mentor, be a friend.

To give kids that support, GYW first partnered with the Boys and Girls Club and now serves youth in Chapel Hill, Carrboro, Hillsborough, Durham, Raleigh and Burlington.

“(Grow Your World is) helping a lot,” Greyban Benitez, an eighth-grader at A.L. Stanback Middle School north of Chapel Hill, said. “You have someone to help you do your homework if you don’t know how to do it.”

Benitez said that he’s currently learning about careers through Grow Your World. Although he’s not certain what he wants to be when he grows up, he’s interested in computers.

His younger brother, Joel, is a fifth-grader at New Hope Elementary School. “Grow Your World gives you more inspiration to do stuff and to learn more stuff about what you could be when you grow up,” Joel said.

“And something else that I love about Grow Your World is that they don’t just ask questions to one person — they ask to the whole group. And another thing that I like about Grow Your World is the teachers because they respect us and they don’t laugh at us when we don’t know something. Instead of laughing at us, they at least teach us how to do it.”

Jubilate Mumburi, a Burlington resident, first heard about GYW last year from a friend who lives in the Chapel Hill-Carrboro district. Mumburi, a migrant from Tanzania, and her husband have three elementary-aged children.

Mumburi says that she tries to do her best with helping her children with their homework, but her time is limited with her work schedule.

“I have to work,” Mumburi said, “I have to prepare their food and help them with homework. But with Grow Your World, they’ve helped me.”

The current session of GYW is closed, but, according to Suberman registration for the upcoming session is opening soon. GYW offers all of its opportunities on a sliding scale.

“We are looking for sponsors to sponsor programming for families who don’t have the financial means to pay so that we can pay staff,” Suberman said, and so that we can ensure that there is diversity in our youth bodies.

“We want to make sure that it’s kids from all backgrounds and all socioeconomic classes.”

Mumburi asked several teachers how much tutoring would cost for her three children. She said they told her $25 per hour, per kid, a cost that would have exceeded her family’s ability to pay.

“(GYW) is really helping me a lot,” Mumburi said.

Before the coronavirus pandemic forced GYW to operate virtually, it had established a partnership with Carolina Friends School. GYW now has 501c3 status and hopes to connect with Chapel Hill-Carrboro City Schools, N.C. Central and Shaw University.

Suberman’s long-term goal is to connect kids from across the globe through Grow Your World.

“Learning and self-care and trauma healing can be building relationships that are healthy and grounded in equity and in uplifting all of us for the betterment and well-being of each other and ourselves in the world,” Suberman said.

“Sometimes as we get older, we create an us versus them dynamic with young people to keep older people feeling valuable and having more of an elder role with young people where they can share their wisdom. But they can also learn and grow from the young people’s wisdom so that we’re all really interconnected and able to support each other in sustainable ways.”