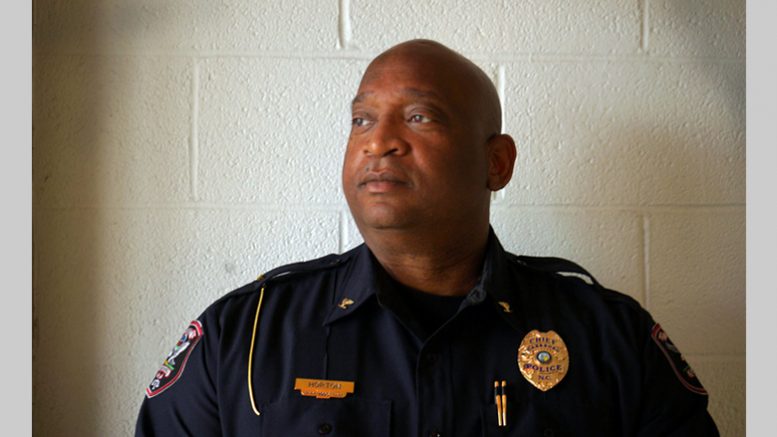 By the time you read this on Monday, Feb. 1, Walter “Bucky” Horton might be out fishing, playing golf or pumping iron in the gym. That would be fitting since it’s his day.

After 27 years with the Carrboro Police Department and seven years as chief, Horton, 51, is hanging up the badge, and Carrboro’s Town Council wants to make sure folks honor this native son.

Before he left office, I had the chance to catch up with the chief, whom many of his admirers refer to as humble, efficient, modest, soft spoken, a gentle giant, the right man for the job in challenging times.

Self-deprecating to a fault, Chief Horton warned me that my story about him would be short because I wouldn’t have much to work with — thus endearing him to this scribbler.

Here’s the thing: Horton strikes an imposing figure. The man is big. Maybe all-caps BIG.  I refuse to call a man built like an NFL linebacker “Bucky.”

“I dunno,” Horton said modestly, when I asked him how he got that diminutive name. “Always been called that.”

Horton is a Carrboro native born and bred, having gone to public school here and then working his entire law enforcement career in “CBO,” beginning as a police officer in September 1993. He advanced his way up through the ranks and was promoted to chief in 2013. Being local gives him deep knowledge, insight and appreciation for the nuances and subtleties of his community — though he says being a “townie” has been a mixed blessing.

He explains there were times when it worked to his advantage, as when, “I knew a lot of people … and if I were dealing with them in a professional capacity, I was able to able to talk them down, get them to calm down.”  On the other hand, Horton says, “Sometimes it was hard. I had to arrest people I went to school with. I had to give a friend a DWI.”

Hail to the Chief

With Horton’s devotion to community policing and what I would call “soft power,” it’s no wonder his fans line up to praise the outgoing chief.

Carrboro Mayor Lydia Lavelle: “He and his department serve everyone in the community, including our immigrant population, by their proactive practice of community policing. Born in Orange County, Chief Horton chose to spend his adult years and career in his home community, and he has served us well. He deserves this well-earned retirement from the Town of Carrboro.”

Carrboro Town Manager Dave Andrews, who hired and promoted Horton: “I want to thank Chief Horton for his service to Carrboro. In addition to his qualities of leadership and integrity, he has a unique understanding of our community which has served us well for many years. The Town of Carrboro is very fortunate to have Chief Horton at the helm of our police department during these very challenging times. We will certainly miss his warm smile and dedication to duty.”

Council member Randee Haven-O’Donnell: “Chief Horton, your authentic caring, dedication and service to your and our community has been outstanding. I especially want to thank you for working closely with us on development, launch and advisement of the El Centro Casa for Employment and Leadership. Your quiet, understated nature, true attentiveness, listening and understanding provided solid anchoring, undergirding our sense of community safety.”

Council member Sammy Slade: “Thank you, chief, for your part in responding and striving to extricate our institutions and system from racism. We are now on a better path towards a more equitable world that is rooted in love.”

Orange County Sheriff Charles Blackwood: “The Chapel Hill Carrboro Holiday parade is a special local tradition. I have lots of good memories of that event, but none more special than one year when Chief Horton, Chief Blue and I decided to get out of our cars and walk the route. We were having a big time, greeting people and shaking hands with members of our community, when Chris Blue pointed out all three of us graduated from Chapel Hill High School. That was a pretty special day. I am happy for Bucky, I respect him for the work he did in his career, and I wish him well in his retirement.”

Sherri Ontjes, Chief Horton’s art and writing teacher at CHHS: “He’s just a splendid person and an asset to our community through these troubled times.”

Pat Garavaglia, long-time owner of Balloons and Tunes: “Bucky has been the perfect police chief for Carrboro; he’s so laid-back and friendly. There was this time Sharon and I were out in the parking lot trying to build an Old Well out of balloons for Fall Fest at UNC — and we were using PVC pipes to make the frame. But we couldn’t get the pipes to bend and join to make the rounded top of the Old Well. Bucky pulled into the parking and saw what we were trying to do … and don’t you know — he just forced those pipes together! He’s a gentle giant, and we’ll miss him.”

Joshua Wood, captain of the Criminal Investigations Division at the Orange County Sheriff’s Office, formerly with the Carrboro Police Department: “I began working at the Carrboro Police Department in 2001. Bucky was the corporal on my patrol shift for the first year or so. Bucky welcomed me in and showed me around the town. I used to visit Bucky’s mother with him, and I enjoyed hearing stories about growing up in Carrboro. He helped me understand more than just the physical layout of the town. He helped me understand the different personalities and communities within it.”

The irony of being a Black police chief in a town named for a despicable racist is not lost on Horton. But he doesn’t go there, deftly side-stepping politics, saying simply that joining the force as a patrolman in 1993 “opened the doors of opportunity to work in community service, investigations and administration, which culminated in my appointment as the town’s first African-American chief of police. It has been a pleasure to serve the community where I grew up and called home.”

But when asked about the murder of George Floyd and subsequent calls for law enforcement reforms, Horton doesn’t shy away. “As far as Black Lives Matter, law enforcement is going to be ever-evolving. Obviously, I am a Black male, so of course Black lives matter. As far as George Floyd and other high-profile cases where there was wrong done by law enforcement officers — as far as me and the Carrboro Police Department, when we see that — and there’s no cause for that. We’re better than that. We also believe that there does need to be some changes in criminal justice and how things are being done.”

Local vocal critics who have lumped CPD in with bad cops in distant cities troubles Horton. “That’s not us,” he says emphatically, adding, “Look at what the Carrboro Police Department does. Take us for our face value. Don’t judge us by the actions of others. Do we get it right all the time? No, but we try. And if we make a mistake, we try to learn from it and move on.”

Carrboro Mayor Lavelle had some thoughts relative to this: “I think it was helpful that we have had a Black police chief leading us during a time when we have had national incidents and conversation stemming from police brutality involving Black people. As a Black man, Chief Horton brought a personal perspective to issues involving Black people, and I believe his voice as a Black man contributed to our local conversation.”

As to the Jan. 6 Capitol riot, Chief Horton chooses his words carefully: “That was just treason. That was just terrible. I know people have their own opinions one way politically or the other, but that was just not the way to express it. I think that was just a scar on our whole country that made us the laughingstock of the whole world.”

Comparing the level of law enforcement at the BLM protest versus the Capitol riot, Horton reiterates, “I try to stay out of politics, but I have some strong thoughts on that. I do feel, the way they treated Black Lives Matter when there was a protest there, having the National Guard and everything there — that does show that there is a difference in how people are treated.”

Whoever replaces Chief Horton will inherit “a good department and good people to stand behind them,” Horton says, adding, “I don’t think I’m the best chief, but I think I’ve left it in pretty good shape. Whoever it is, they won’t run into any ‘gotchas.’ I’ve kept my team, and my captains are on board, and I’m keeping them in the loop on different things in the past several months, so whoever comes in, whoever gets the job, they can get them up to speed and know what we’ve been working on, what we’ve done, and share some of the historical knowledge so they can craft their plan and how they want to run the department.”

At the end of our interview, I had to ask that “duh” question. Why step away at only 51?

Horton thought for a minute before explaining, “It’s like that old Kenny Rogers song, “The Gambler.”

“I feel like it’s time for me to walk away. You kind of know when it’s time. This is a hard career to be in. You’ve got to retire at age 55 or (after) 30 years. I’m leaving on my own terms, which is always great. Is there more I could do? Possibly.

“But,” and here he paused for emphasis, “I’ve worked hard! I just want kind of want to relax a little bit.”

Check out the Town of Carrboro website and Catherine Lazorko’s story on Chief Horton.
http://www.townofcarrboro.org/civicalerts.aspx?aid=1553

For Mayor Lavell’s tribute to Chief Horton, go to
https://chapelboro.com/town-square/hometown-heroes/hometown-hero-carrboro-police-chief-walter-horton

Be the first to comment on "Hail to the Chief: Walter “Bucky” Horton"