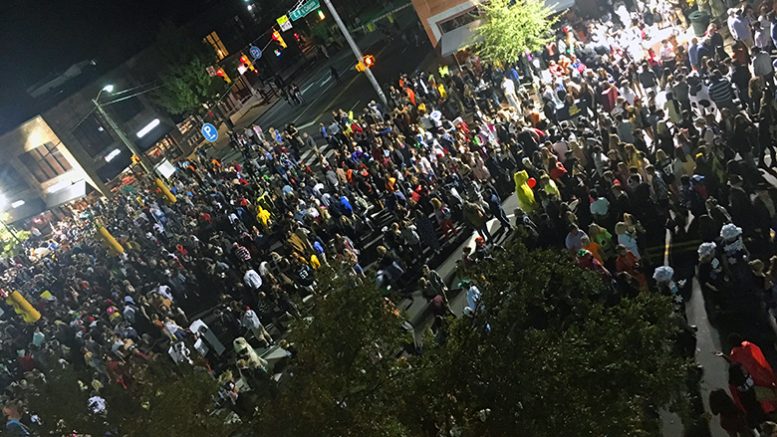 The Franklin Street Halloween celebration that has become a local tradition may see smaller crowds this year due to its midweek date and a forecast calling for rainy weather. But that will not stop police from UNC and the Town of Chapel Hill from being prepared to make it a safe celebration.

The two police forces will assist each other in providing security for students and the public. Other officers will be coming in from jurisdictions across the state. Chapel Hill Police estimate that about 200 public safety officers are preparing to be in place for the event Thursday from 8 p.m. until 10:30 pm, according to Chapel Hill Police Public Information Officer Ran Northam.

Last year, the event attracted about 16,000 people, according to the town. The town spent $160,000 on the extra public services. There were four alcohol-related arrests but no transports by emergency services.

These are smaller numbers compared to 2014, when 32,000 people attended and there were 79 alcohol-related arrests and 29 people were transported by EMS. These figures apply to the closed-off section of Franklin Street and the surrounding areas during the homegrown Halloween event.

“We want everyone to be safe well into the night after 10:30 p.m., when the event is over,” said Northam. “There is no restriction on the type of costumes that can be worn, but anything that remotely resembles a weapon would be confiscated and not returned. No alcohol, glass bottles, paint, fireworks, flammable substances, coolers or animals are allowed and checkpoints will be in place.”

According to the town website, downtown residents will be able to drive in and out of the barricaded streets and guests may come through, as long as they provide the officer with an address. But be prepared for long waits to get through.

Streets that will close at 8 pm:

If you do want to go downtown for the celebration, and want to take public transit, go to chtransit@townofchapelhill.org. For downtown parking information, visit http://parkonthehill.com.

Chapel Hill is Lighting Up

Be the first to comment on "Halloween 2019 – Maybe Not So Spooky this Year?"