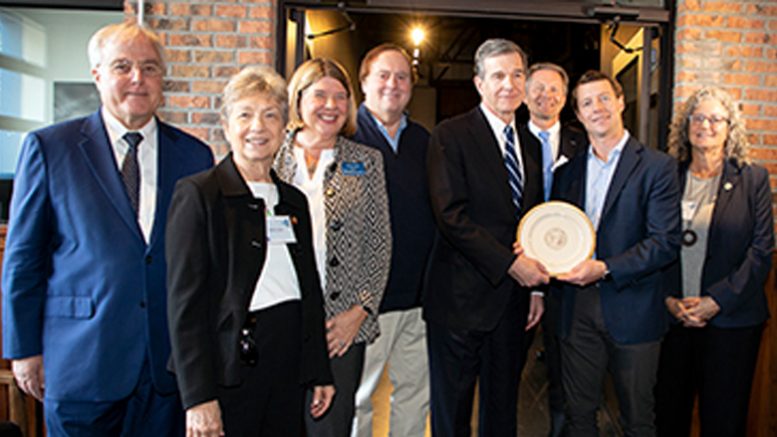 Well Dot Inc, a high-tech health services firm, will be moving its clinical operations headquarters to Franklin Street and bringing with it 400 new jobs.

“We are very excited to welcome this new and innovative business that will be bringing … high-paying jobs and a three-million-dollar investment to North Carolina in Chapel Hill,” Gov. Roy Cooper said in announcing the news. “Well is a perfect example of what we are talking about … an innovative company trying to make the population of North Carolina healthier.”

The company provides technology-based solutions to consumers with health and wellness needs. “Healthcare and information technology are areas where North Carolina excels, because of our strong workforce and the continued pipeline of workers from universities and colleges all over the state,” said Cooper. “Companies like Well see our achievements as a strong reason to choose places like Chapel Hill to pursue their plans for success.”

At its new headquarters at 419 West Franklin Street — the location of the former Carolina Ale House in downtown Chapel Hill — Well will create jobs in health care, consumer marketing, technology, artificial intelligence and customer engagement. The average salary for the jobs will be $63,000 per year, company officials said. Currently, the Orange County average salary is just over $46,000.

The company already has a number of employees in Chapel Hill. “North Carolina has proven to be a fertile market to attract top talent across our range of requirements, from development to clinical to customer service,” said Gary Loveman, Well’s founding chairman and chief executive. “Our leadership team has close ties to Chapel Hill and we are thrilled to make our home here.”

Well’s move should breathe new life into a location owned by Joe Riddle, a Fayetteville-based real estate investor and UNC alumnus who owns four adjacent parcels, including public parking lots leased to the town of Chapel Hill. Years earlier, the building was home to the former Yates Motor Company. It stood vacant for a decade until it became the ale house restaurant, but has been empty again for several years.

To woo Well to North Carolina, state officials approved an incentives package of tax reductions worth nearly $3.4million over the next 12 years. During that time, Well’s location here is estimated to grow the state’s economy by $609 million, according to the commerce department.

Additionally, the Town of Chapel Hill has offered a performance-based incentives package that includes $450,000 tied to job creation and $450,000 in parking credits over a period of eight years.  The incentive program is contingent on Town Council approval and would be awarded based on the company meeting specific targets for new jobs.

On-site (property/building) improvements are expected to contribute new property taxes which will help defray the cost of the incentives program, town officials said.

“It’s exciting to see this new operations center locate in Chapel Hill,” said local state Rep. Verla Insko. “Many people at both the state and local level worked hard to attract this project. I look forward to working with and supporting this company for many years to come.”

Why Buc-ee’s Would Have Been a Boon

On My Back, in UNC’s Cardio Section

A Shot in the Dark