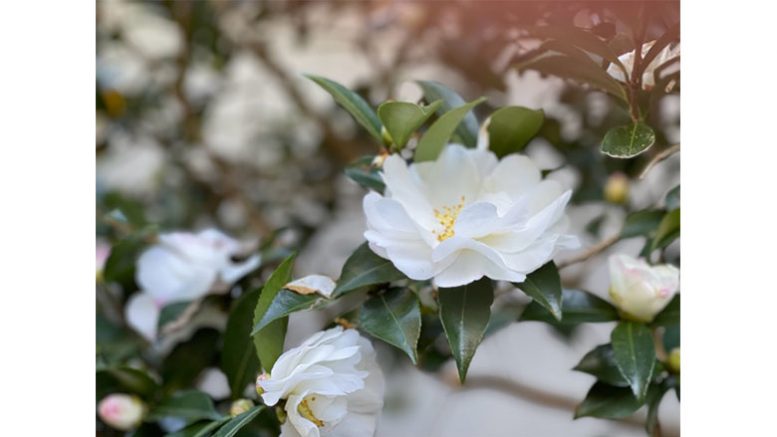 As a gardener, I love the change of seasons. While I have friends who dread the fall as they fear the winter that follows, I love almost everything that autumn has to offer.

During our long, hot summers, I always have the feeling that my plants are hanging on for dear life. When night temperatures fail to fall below 75° at night, plants have to work on hydration throughout the night. The telltale sign that life is tough is when you exit your air-conditioned house early in the morning and you notice that the plants lack turgidity in their leaves. Yes, a dose of water will help them but this is also an indication of an exhausted plant.

In the fall, when the night temperatures fall to the low 60°s and even the blessed 50°s, the resulting garden appears to hum with vigor. The roses start to produce both new leaves that will remain on the plant during the winter and lovely blooms. No, the blooms don’t rival the spring outburst but they sure are better than those produced in the summer.

My fall bulbs consist of just one species: Amarcrinum. If you do not know about this bulb, rush to Brent and Becky’s Bulbs to place your order for next spring. The Amarcrinum is a marriage between Amaryllis belladonna, a South African bulb we cannot grow here, and a crinum, a species that thrives in the American South.

The result is a fall bloomer that produces scape after scape for four or five straight weeks. Appearing at the end of August, this is the first sign that autumn is right around the corner. One caveat: It takes three years, on average, before this bulb will consent to present us with blooms so patience is required.

The two Camellia x Snow Flurry are the first of the camellias to bloom in the garden. Originally, we planted two shrubs next to one another. When it became apparent that I needed more balance in the garden, we transplanted one to the other side of the hardscape walkway. For some reason, this transplant blooms later than the original one although they both receive the same amount of light. For two years the transplant demonstrated its displeasure by a refusal to flower before overcoming its reluctance so I am grateful for any blooms it now produces.

I have a large Japanese maple that begins the spring with an attractive red halo before turning green in the summer. In the fall, it begins its passage back to its original color before it bursts into brilliant red flames, a signal that the leaves will soon fall.

My profuse yield of jalapeños is turning a lovely red color, something you rarely see in the markets. The hostas and the peonies are busy preparing for an early slumber whereas the hellebores are waking up. The seedpods of my hardy orchid, Bletilla striata, have been brown for a long time – will the seeds finally pop out? The garden is filled with such unanswered questions. The seeds in the garden mesmerize me – they continue to tell me that the main job of the plants is to procreate rather than to simply give me pleasure. Echinacea seeds are long, skinny shapes that don’t resemble the seeds in my imagination but almost look like dried-up remnants of the flowers. The cannas put out amazing seedpods that are as attractive as their flowers – but I must watch them carefully as the seeds will willingly sprout anywhere. Fortunately, cannas are so shallow-rooted that they pull out easily.

And then there are the seeds that aren’t really seeds. For years I assumed my Begonia grandis spread via seeds. This begonia is worth having because it has a two-month bloom period extending from late summer into autumn, gracefully settling where it is appropriate. With a little research I discovered that this begonia multiplied not by producing seeds but by growing tiny bulbils that develop along the crux of the stems. According to Wikipedia, “A bulbil is a small, young plant that is reproduced vegetatively from axillary buds on the parent plant’s stem.” Bulbils can be obvious, as they are on agaves, or they can be quite small, as they are on my Begonia grandis.

The black seeds on my Euscaphus japonica, the Korean sweetheart tree, are just bursting forth from their red heart-shaped seed pods. In the 10 years I have had this tree, only two seeds have ever sprouted so I do not worry about potential invasive qualities.

The sun has changed. Not only is it lower in the sky, but the sunrise has switched from a northeastern to a southeastern exposure. By Dec. 21, the sun will be at its lowest point in the sky and at its most southeastern point before it starts its travels back on its northeastern path, climaxing at the summer solstice June 21.

Last but by no means least, the air is clearer, less humid, less hazy. We can open windows happily. Sweaters feel nice. Yes, fall can be a lovely time of the year.

Welcome to the World of Hydrangeas