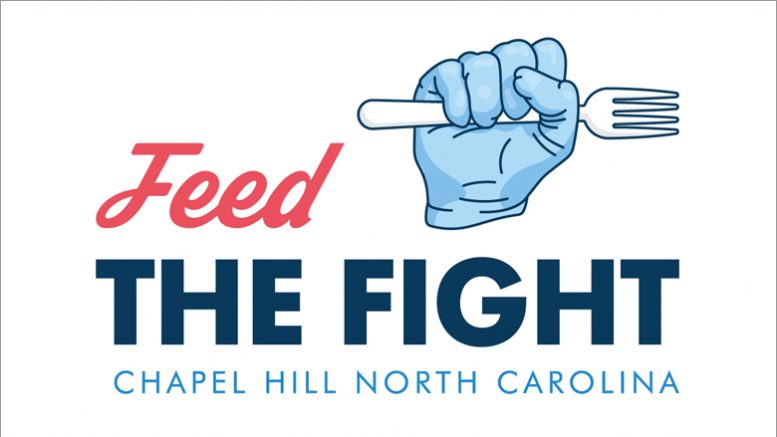 Two of the groups hit hardest by the coronavirus pandemic have been healthcare workers and small business owners. A pair of sisters in Chapel Hill wants to help both.

UNC graduates Lydia Stewart and Phoebe Murray started Feed the Fight Chapel Hill as a GoFundMe page on March 31. After raising more than $12,000 to feed Chapel Hill healthcare workers in under a week, they joined forces with Frontline Foods in an effort to provide even more meals.

To date Feed the Fight has raised nearly $26,000 and served more than 1,200 meals for healthcare workers at UNC Hospitals. In the process they’ve given many local restaurants much needed business.

“We want these restaurants to be here when this is all said and done,” Stewart said. “And we want the people in our community who are risking their lives for our own safety to feel loved and appreciated.”

Within a month of its launch, Feed the Fight Chapel Hill has already partnered with Frontline Foods, a national organization and a part of World Central Kitchen, a nonprofit striving to feed millions globally during the coronavirus pandemic. It was recently featured on the television program “60 Minutes.”

Stewart said Feed the Fight has fed nurses, doctors, janitors and other staff across many departments at UNC Hospitals, including the ICU, emergency department and the respiratory diagnostic department where patients are tested for COVID-19.

Murray said many of the healthcare workers they serve may usually be too busy to take a break to eat during their shifts, and wouldn’t be able to eat without the ready-made meals Feed the Fight provides.

“We know that it’s hard for them to keep their spirits up right now,” Murray said. “They’re really overwhelmed by their schedules and the fear of this pandemic.”

Stewart said Feed the Fight tries to be accommodating by providing meals that will travel well, offering vegetarian and gluten-free options and staggering delivery times to reach as many hospital employees as possible.

Vecino Brewing manager Monica Molina said that although her establishment is currently operating with a skeleton crew, business from Feed the Fight and other groups started to help restaurants during the pandemic, like the Carrboro United Food Hub, might allow them to rehire additional kitchen staff in the near future.

Molina said she was grateful to be in Orange County where people like Stewart and Murray are working to help their community.

“Those two ladies are like angels to me,” said Molina, who added that she also was happy to help UNC Healthcare.

“For us, to be able to give back to them that way was such an honor,” Molina said. “We feel like the UNC Healthcare family is part of our family because they’re so close to us.”

Pizza Press manager Andreas Handrinos said his restaurant contributed 100 pizzas at cost to Feed the Fight about a week ago. Pizza Press has also recently donated pizzas to the Interfaith Council for Social Service and UNC Family Housing.

Handrinos said he thinks it is important to help one’s community during difficult times.

“For me it’s just being part of the community, making sure that we’re actually doing the best that we can.”

Pizza Press, he added, is currently operating at a loss, but that he was grateful for the business provided by Feed the Fight.

“It’s a drop in the bucket but that’s how you fill a bucket, with drops,” Handrinos said.

Those interested in donating to Feed the Fight Chapel Hill or volunteering with them can find out how at https://www.frontlinefoods.org/chapel-hill-nc

Be the first to comment on "Helping Restaurants Help Healthcare Workers"