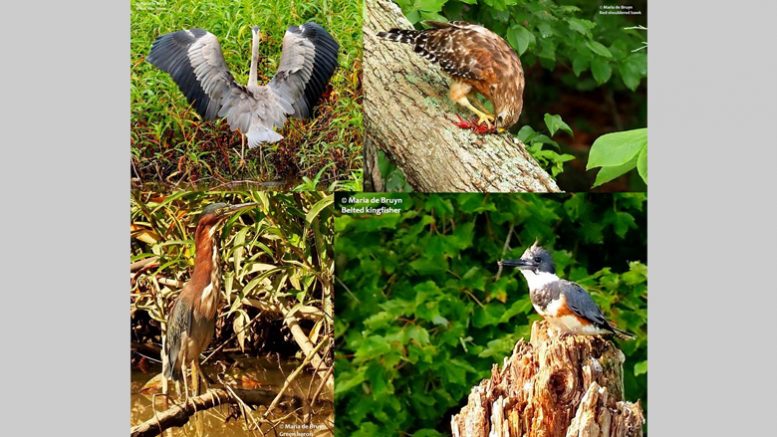 Autumn has arrived with somewhat cooler temperatures. That seasonal change bodes well for relaxing and for interesting nature walks, and our area is fortunate in having many places where we can get outdoors to enjoy plants and wildlife while social distancing.

Orange County, our municipalities, local universities and the Triangle Land Conservancy all have great walking and hiking trails available (see below). But there are also some “hidden gems” that may not appear on park lists.

One such place is just over the Durham County line in a place people associate with shopping for home goods rather than going out to see birds and butterflies. Right behind Patterson Place shopping center on Danziger Drive, there is a constructed wetlands with a large pond frequented by a variety of interesting birds.

The small fish in the elongated pond are a favored meal for a variety of birds: belted kingfishers, great egrets, great blue herons and smaller green herons. In spring and summer this year, the wetlands also attracted other avian species who greatly enjoy a meal of crawdads (or crayfish as people in other parts of the country might call them): red-shouldered hawks and yellow-crowned night herons. Although the pond was home to a good number of crawdads, the hawks did not seem interested in sharing their bounty during my visits there. On a couple occasions, I saw a hawk drive off a yellow-crowned night heron so that it had a favored hunting area to itself.

Nevertheless, an adult pair of night herons, distinguished by their light gray plumage, dark gray heads and bright white under-eye stripe, were accompanied all summer by four offspring who look quite different. The immature herons are brown and beige with striped chests and spots on the wings. Both types of feather markings make it easy for them to hide in the marsh vegetation as they stalk about in search of a meal.

The wetlands attracted a fair number of human spectators this summer — many birders flocked there to see the night herons. These birds will likely leave soon, although four were still spotted as late as Sept. 16. Even after they leave, however, other birds will continue their residence at the pond, including a large number of Canada geese who wander around the grassy areas along the pond. If you want a break from shopping, a visit to the wetlands is worth your while — especially if you are there in the early morning or later afternoon.

If you know of some little-known nature areas that others might enjoy, please mention them in the comments for this column. In the meantime, enjoy the autumn season!

Be the first to comment on "Herons, Hawks and Home Goods Stores"