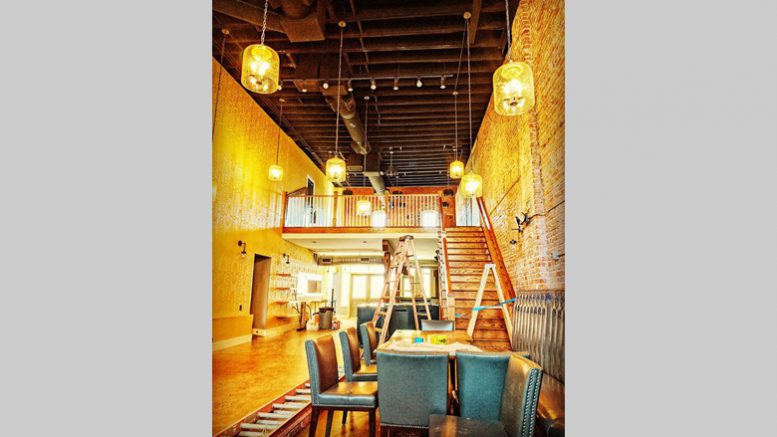 This new King Street restaurant – opening in a matter of weeks – plans to bring a whole new meaning to the word “nomad,” delivering a diverse range of cuisine influenced by the owners’ travels around the world and the types of foods they’ve experienced in the process. Expect traditional ethnic dishes with a unique spin, served in a small-plate format.

Co-owners Sejal and BJ Patel are behind Nomad, along with managing partner Nick Singh and executive chef RJ St. John. The restaurant is something of an ode to the childhoods of its leaders. As Sejal and BJ’s parents traveled from place to place, they introduced the cousins to various cultures and food, creating a shared passion for the world.

The Patel brothers already own and operate Viceroy in Durham, a restaurant known for its British/Indian dishes.

Almost a century ago, the Nomad building housed the Osbunn Theatre, and the team has designed a space that preserves as much of the movie theater as possible – with lots of exposed brick and exposed beams and ductwork.

With new owners, Eno Gallery on South Churton Street is now Bakova Gallery, which had its grand opening in December 2019. It’s committed to presenting a diverse collection of imaginative and culturally relevant exhibitions, from contemporary and pop art to traditional fine art.

Find out more at bakovagallery.com.

See the full schedule at yonderbarnc.com.

A new art space will occupy a prominent Hillsborough location. Last fall, the Orange County Board of Commissioners authorized the Eno River Mill Arts Project. The Orange County Arts Commission will rent space from Hedgehog Holdings, which manages the mill, to create 13 move-in artist studio spaces in a 2,970-square-foot space.

Artists can rent the space from the county and use it as a creative, storage, and display area. The partnership offers artists affordable square footage while transforming the mill into an arts destination.

For updates, go to artsorange.org. Formerly LaPlace Louisiana Cookery, James Pharmacy opened in the spring of 2019, with a name that honors the town pharmacy that once occupied its building. It dubs itself a “yacht party – but on land!” The team works with fish purveyors along the North Carolina coast. Owner Matt Fox also owns the popular Wooden Nickel pub next door. The kitchen is headed by Ben Braxton, a Hillsborough native who has worked with renowned Southern chef John Currance.

Bull City Music School founder Jeanetta Hopkins selected Hillsborough as the site of her expansion from Durham. The school’s Hillsborough space – featuring four spacious classrooms – is downtown, on the back side of the Mercantile Center.

Carolina Hemp Hut is a purveyor of CBD products in Hillsborough, which opened in the spring of 2019 and is owned by Mary Lopez Carter and David Carter. Their products – many of them certified USDA organic – include CBD (cannabidiol) and hemp oil extract drops and tinctures, CBD and hemp oil supplements, CBD-infused edibles such as gummy candies, topical salves, creams, beauty and skincare items, and incense, vaporizers, and e-juice.

Find out more at carolinahemphut.com. Hillsborough’s historic Colonial Inn, located at 153 W. King Street, is wrapping up construction with plans for a June 2020 grand opening, says Elise Tyler, general manager of the historic Inn. Elise talked to the Chapel Hill/Orange County Visitors Bureau board on February 19, updating local leaders on how the Inn is being reconstructed and restored, including a kitchen and dining room, the lobby, the restaurant and new sleeping rooms. They also have added a new two-story building with 18 rooms behind the inn with a new brick courtyard and landscaped lawn for weddings. Follow Colonial Inn on Facebook or reach-out to Elise Tyler, general manager, elise1tyler@gmail.com Hillsborough’s Holiday Inn Express underwent a major makeover with new rooms, conference facilities and upgrades to the community dining center. Area leaders turned-out in support for the longtime operators Anjan and Mina Desai, whose commitment to Hillsborough has been a steady force in this historic town.

A fun time to hit the streets. Art Walk featuring local galleries and artist studios in historic downtown Hillsborough on the Last Friday of every month.

Be the first to comment on "Hillsborough Hot List: A Roundup of New, and Reinvented, Places to Visit"