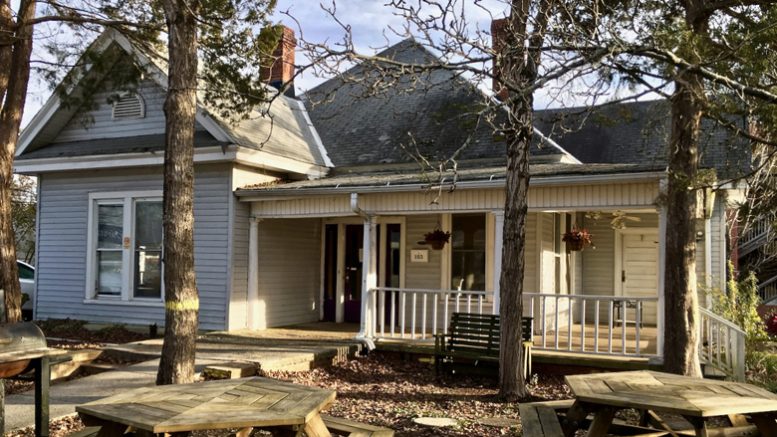 Better planning might have saved the historic house Club Nova used as its clubhouse. Instead, it was demolished to make room for expansion.

After unsuccessful attempts to relocate the historic house it used as its office and clubhouse, Club Nova demolished the house on March 2 to make way for construction to begin on a new building that will help the organization better serve its members.

Club Nova’s plans for a new, improved building have been in the works since late 2013. Carrboro’s town council approved the expansion in 2014. But funding lagged, and Club Nova delayed breaking ground until it could implement the complete plan at one time, rather than in stages. In October last year, council approved a new conditional-use permit for a 9,050-square-foot building with 22 parking spaces.

Karen Dunn, executive director of Club Nova Community Inc., said plans had been in the works for many years “to have a facility that was an effective physical space for members and staff to work together in a space that reflected dignity and respect.”

Dunn said a driving factor in the organization’s decision to replace its old building with a new, more accommodating one is that, after Club Nova became a free-standing nonprofit (it was once a part of the Orange Person Chatham Area Authority Mental Health Center), OPC in 2012 gave Club Nova the land on which it’s currently located. After that, Club Nova was able to begin making plans to upgrade its buildings and property.

“We struggled for years on whether or not to try to renovate the house,” Dunn said, “… and as much as we love that house despite its maintenance issues, we just finally decided it’s time to let it go.”

It was a tough decision for Club Nova because, even though the space was inadequate for the organization to truly achieve its mission, a lot of history had taken place within that house’s walls.

Trish McGuire, planning director for the Town of Carrboro, said the house was a Carrboro mill owner’s home. In the 20th century, mill employees often frequented the house after work because it was where they picked up their pay.

However, even though the house was historically significant to Carrboro, the cost of moving outweighed the benefits for Club Nova.

Eric Chupp of Capkov Ventures was one of those interested in moving the house. He had planned to relocate it in Carrboro at a cost he estimated would have been between $40,000 and $50,000. He asked Club Nova to share the expense.

Chupp said moving a house that size “takes a good deal of time in advance, once you know where the house is going, and you’ve come to a contractual agreement on who’s paying for [what].” It would have added another three months to the timeline to decide who would get the house, how to pay for it, and how and when it would be moved.

Chupp brought a house-moving crew to look at the property and had been in talks with Club Nova about moving the house for about a year. But, Dunn said, “the clock was ticking and the number of things that would have to happen and work to move that house would have delayed our construction. We were at a point we just could not wait any longer.”

Chupp said he thinks that more appropriate planning could have saved the house and kept it in Carrboro. Demolition costs can run into the thousands of dollars, and that amount could have been paid toward moving the house.

“I think really a lot of people or organizations just aren’t used to all that’s involved in it,” he said. “You know, with all of the other variables of the construction project like this, the timing, I think it all just became too much for [Club Nova] to handle, which is a shame, because I do think the house had real historic value for the town of Carrboro, and it would have been nice to have stayed in Carrboro.”

However, for Club Nova, providing its members with an adequate space that would allow the organization to better meet its needs was more important. The planned two-story building with a third-floor mezzanine will have a career center, a full commercial kitchen, and a garden and greenhouse for members to use, along with flexible meeting spaces for education and training to be used by universities, law enforcement and the community as a whole.

Dunn said, “It has taken multiple villages to fund this project.” A lot of funding has come from Club Nova’s board of directors, which allowed the organization to receive a very sizable matching grant. The capital campaign has also been funded by the club’s managed care organization, private donors, foundations and the towns of Carrboro and Chapel Hill, among others. The total cost of the project, including pre-development work, construction, moving expenses and furnishings is expected to be $4.1 million.

Club Nova expects the project to be completed within a year; however, there are a multitude of factors that could slow progress, such as weather and pandemic-related shortages of materials.

“As long as we don’t run into any surprises, we’ll be good,” Dunn said.