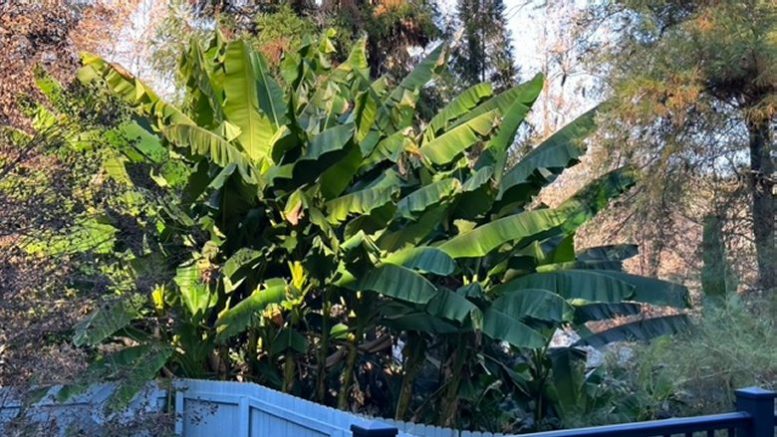 This Musa basjoo, more commonly known as a banana plant, spreads its wing-like leaves in a showy display. Photo by Kit Flynn.

Gardens have histories, ones that are often overlooked. I was reminded of this the other day when I happened to look at my grove—and I do mean grove—of bananas, a.k.a. Musa basjoo. I suddenly remembered how years ago I had planted just one Musa, tucking it in a faraway corner of the front garden. And there it remained for five years.

Now this banana was planted in the midst of my tropical plant mania, when no leaf could be too large. I didn’t want to live in the tropics; rather, I wanted an Aruba that had four seasons. While this fetish soon waned after a couple of years (Bougainvillea, I found, doesn’t do much in one short growing season), the Musa basjoo not only survived but one could even say it thrived. Through rhizome creep, one specimen soon became five. All was well except for one fact: With the first major frost, these sweeping large leaves turned into the Grim Reaper, a sight that persisted for five months until the roots sprouted new life. Alas, five months a year to look at the Grim Reaper. Photo by Kit Flynn.

The truth was that I became sick and tired of looking at the Grim Reaper for half a year so we took the five plants down, lugging them to the compost pile that resides outside the back fence. Without the Grim Reaper peering over my shoulder, my disposition improved and, best of all, I had some available room to install new plants. Planting under Musa basjoo is not recommended as invading rhizomes tend to conquer all new infringements.

One day while putting new cuttings on the compost pile, I noticed new growth stirring in it – a lot of new growth. Each segment of the stalks we had laid on the pile had not only survived winter but had sprouted. Five cut up banana plants had quickly multiplied to fifteen; soon they were soaring way above the back fence.

Now I discovered that Grim Reapers behind a backyard fence don’t bother me; I love viewing these dramatic, large-leafed plants while I’m able to ignore uninviting drooping leaves from afar. Today, this area nurtures (at last count) 45 banana trees. I’m often asked whether they ever supply fruit; while it usually takes 12 to 24 months of warm weather to produce a banana, one of mine once did feature a banana, albeit inedible. These are not the same bananas featured at Harris Teeter.

Another piece of history now resides in the deer passageway that exists between my neighbor’s and my properties. In the midst of my tropical mania, I managed to get ahold of Tetrapanax papyrifer “Steroidal Giant,” happily planting it. Now, this was a spectacular addition, making an ostentatious splash to the garden, an effect I was decidedly after as I didn’t want a garden filled with shrinking violets. Little did I know what I had planted. The rhizomes on Tetrapanax put those belonging to Musa basjoo to shame. After one year I had five grown specimens, all achieving twelve feet in height. At first, I was overwhelmed with flattery: “It loves me!” I thought. Then, I began saying, “Now, no more, do you hear me?”

My weeding began in earnest as I became familiar with seedlings popping up 10, 15, even 25 feet from the mother. I pulled and I pulled. Some days I could pull out 25 seedlings. If ever a plant required birth control, it was this plant. Meanwhile, it had managed to move under the fence and onto my neighbor’s property.

We sawed off the stiff stems leaving five-inch stumps, thereby creating another problem. While weeding some hellebores near it, a sudden movement along one of the stiff stumps managed to create a long gouge on my shin, sending me to the ER. After many stitches, a later infection causing a five-day hospital stay, and an eight-month healing process, we dug up all the roots and stem stumps of Tetrapanax on my property. It still remains on the deer passageway, looking extremely awesome. And miraculously, it has never once sent a seedling back from whence it came.

Along with my tropical obsession, I went through a period requiring instant gratification. As a result, I purchased my first windmill palm, Trachycarpus fortunei, as a dynamic six-footer. Later, spying a two-foot palm in a nursery, I bought it on a whim, never dreaming that it would ever over take my six-footer. Today, it not only is taller but much fuller than the one I had started out with. They are only 10 feet apart, so I have no explanation for the growth difference.

As a trained historian, I enjoy going through the garden remembering where I purchased a particular plant and the reasons behind its purchase. These plants, like the garden, are part of me and my own personal history. Just as gardens change over the years, our motives for digging in the dirt also modify and alter. A trip down memory lane, however, recalls what once was.