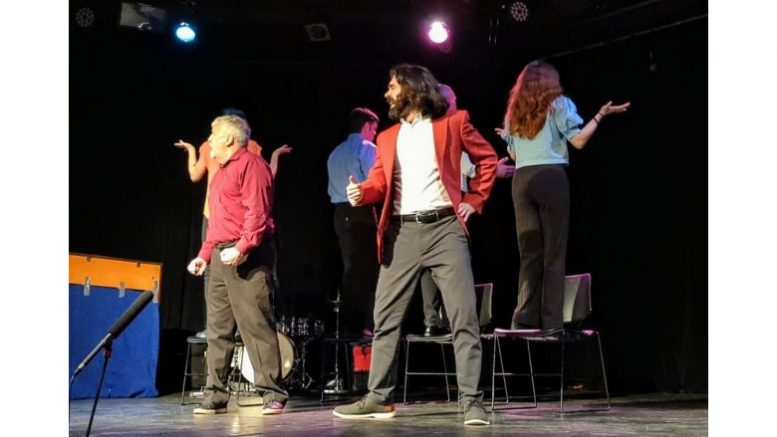 Actors Improv on stage at The ArtsCenter Dec. 3 in The Seeking Season. Photo by Pamir Kiciman.

This December, The ArtsCenter in Carrboro has two improv (improvisation) shows for the holidays. Both performing groups are locally born and bred, with ties to the community and beyond in diverse ways.

While improv is mainly thought of as comedic, there is more to it because it includes some life-changing principles.

What is often missed about improv as a performance art is that it is rooted in theater. Improv originates from the theater stage, not the stand-up comedy mike. If done well, it can also be uproariously funny.

The local area, in fact, has a robust collection of improv.

With its roots in 16th-century commedia dell’arte, the improv of today began in the late 1950s, taking hold in the early ’60s.

Briefly, improv is a theatrical performance that is totally unscripted and unplanned, where everything is created spontaneously on the spot by an ensemble of performers.

According to its website, locally based Actors Improv “is the longest-running improvisational theater in the South” with the pedigree to prove it (since 1983.) On Dec. 3 they performed The Seeking Season at The ArtsCenter.

Greg Hohn, the director of Actors Improv since 1996, is a professor at UNC-CH’s Kenan-Flagler Business School, where he has been teaching applied improv since 2000.

Applied improvisation is used outside of improv performance to bring its inherent life skills of communication, emotional intelligence and creative problem solving to businesses, institutions and other organizations.

But back to last Saturday’s show! In The Seeking Season, six characters in the Big City are all searching for something. The “something” comes from the audience. It is also a musical. That is quite unusual in the improv world—or  sometimes poorly executed.

Each improv performance is never repeated. These six performers were tasked by the audience with finding or accomplishing the following: a new career, finding that one sock, vengeance for murder, the pursuit of tap dancing, breakup blues/new love, and being free of mother. Then the festivities began.

Taking place over two acts, with accompaniment by Rob Ladd on drums and Glenn Mehrbach on piano (each with accomplished music careers), the six characters pursued their quest and interacted with each other. Mini scenes began with dialogue and miming (no props except basic chairs) and continued with music, which always started organically, together with singing and dancing.

Storylines collided or sometimes merged. Character arcs developed as the performance went on. Lots of laughter, cheers and further interaction from the audience ensued. And a lot of quirkiness and humanity.

The Seeking Season ended with a group song and dance, where each character had breakout solos about their particular search.

The Local Reporter (TLR) will return in early 2023 with new improv coverage about Actors Improv, its February show and input from Greg Hohn.

According to a 2020 study published in the journal Thinking Skills and Creativity, improv classes are linked to several mental health benefits, such as less anxiety and depression, less social anxiety and increased ability to tolerate uncertainty.

“I had very bad social anxiety. I was desperate to get out of the prison that felt like my life,” wrote Anoo Tree Brod in an email correspondence with TLR.

Brod is the founder of Wild Mind Improv, which presents its Holly Jolly Holiday Show at The ArtsCenter on Dec. 17.

“My intuition kept repeating ‘take an acting class.’ I was like, that’s the worst thing I can possibly hear! But I was desperate. I signed up for Improv 101 taught by Greg Hohn and Dan Sipp of Actors Improv (formerly Transactors). And I fell in love,” explained Brod.

“Improv has been my lifeline for over 20 years now. It gives me joy when all else feels dark, it gives me purpose when I feel purposeless, it reconnects me to who I am beneath all of my problems.”

Improv generally falls into three categories: short-form (improv games), long-form, and narrative form. The Seeking Season is an example of narrative improv with its storytelling to develop characters and relationships.

For the Dec. 17 show, Brod is teaming up with her original teacher Dan Sipp and with Dylan Grewen for short-form improv based on suggestions from the audience for a family-friendly, holiday-themed performance. It will be the first time this trio has performed together. There is also a surprise special guest.

Wild Mind Improv tends to do short-form for its family-oriented shows, and long-form for its “adult shows.” Long-form improv is usually a collection of scenes that end with a punchline and a new unrelated scene begins. “I get feedback that people leave shows feeling inspired. It’s reconnecting to pure, wholesome joy. It’s being a part of something creative,” said Brod. “I have people tell me they took some of the games we did at our family-friendly shows and play[ed] them with their families later.”

One of improv’s most significant principles is the simple “yes, and.”

On stage, this is how performers work and relate to each other. One receives what the other performer does or says with a “yes,” then builds on it with an “and.” Bits and scenes come alive as the “yes, and,” ball is bounced between players.

“‘Yes, and’ is a great tool for listening, connection and relationships,” Brod said. “Not only is it affirming to the person you are communicating with: Let’s build something together! Yes, and! But it’s a great way to stay connected to the present moment.”

The benefits of this type of mindfulness in daily or work life can be easily extrapolated.

If you are in an improv show or class, you are there in a scene with a partner performer and you have to actively observe, be receptive to the elements of the scene unfolding in real time, and make rapid choices, either as responses or as words and actions you initiate.

This is not so different than how everyone has to navigate their day no matter what they may be involved in.

“For classes, I definitely get the word ‘life-changing’ a lot. I’m finding that improv is more like yoga. It’s a practice. The more you do it, the deeper the improv concepts can penetrate your mind and body,” Brod said.

Play and spontaneity are big pluses in improv as well. It is a safe space to be silly and give room to your imagination.