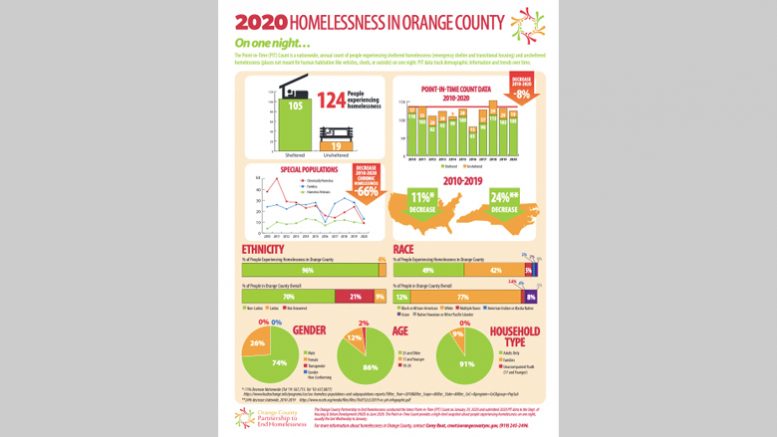 Ellis Smith describes himself as a people person who believes in Jesus and loves sports, fishing and the NC State Wolfpack.

“I struggled a lot to get up in life. Alcohol and drugs have been a problem for me for a while,” Smith said.

Smith, who came to Chapel Hill after living in Raleigh for about 30 years, said he was recently kicked out of the Durham Rescue Mission shelter for using drugs and drinking. According to the most recent statistics, he is one of approximately 124 people experiencing homelessness in Orange County, with 19 of these individuals being unsheltered.

That number is down slightly from the year before. But it only reflects conditions last January, before the onset of the pandemic, when OCPEH participates in the annual nationwide Point-In-Time Count of people experiencing homelessness who are also connected to service providers.

And homelessness is often a lagging measure during economic downturns, said Corey Root, homeless programs coordinator at the Orange County Partnership to End Homelessness. After the 2008 recession, rates of homelessness didn’t increase substantially until 2010.

Meanwhile, local shelters report seeing higher demand for their services. And during the pandemic, homelessness has become more visible.

Local residents have reported more frequent interactions with panhandlers on Franklin Street, but Root said this does not necessarily mean rates have increased. She noted the importance of making a distinction between panhandlers and individuals experiencing homelessness.

When asked about a new cluster of individuals living in tents on the Wallace Parking Deck behind West Franklin Street, Root said this does not necessarily represent an increase in homelessness either.

“Since the start of the pandemic, that was a place where the police department said folks can go during COVID times. That is a new thing for COVID. That is a change,” Root said.

Regardless of relatively stable statistics, homelessness remains a harsh, everyday reality for those experiencing it, and officials say the area cannot run a best-practice shelter without systemic change.

Two days after I spoke with Smith, the nighttime temperature dropped to 40 degrees — an added discomfort for someone sleeping outside.  And this week, night-time temperatures will fall into the 20s.

Jackie Jenks, president and CEO of the Inter-Faith Council for Social Service, said the organization has seen a growing number of individuals come to IFC’s Rosemary Street location, which houses food security programs and emergency assistance. People must present themselves at this location to ask about gaining entrance to one of two shelters: Community House, which provides shelter for single men, and HomeStart, which houses families and single women.

“People have said they need shelter again, or they need it for the first time,” Jenks said. “People have lost jobs. They were sort of living paycheck to paycheck anyways when COVID hit, and their restaurant closed or the need for workers scaled down. People found themselves without work, and therefore unable to afford their places.”

IFC has changed its operations due to COVID-19, Jenks said. It has moved single adults from both shelters into a hotel that they are staffing and supporting through Federal Emergency Management Agency funds. Families are staying in HomeStart because they have individual rooms with bathrooms.

When asked about people who said they could not find housing at IFC, Jenks said they are always at capacity, as the only shelter in the area. Some people cannot live at the shelter regardless, due to the town’s Good Neighbor Plan.

“The current Good Neighbor Plan requires us to do a criminal background check, check the sex offender registry. And to do that it requires that people have an ID or are close to getting one,” Jenks said. “We do work with people to get their ID, so we have been able to get some folks in that way, and it also requires that people state an intention to be clean and sober.”

Root said the plan has contributed to a gap in their system.

“When IFC was siting the men’s shelter, they had to agree to a lot of stipulations that really hemmed them in on what they’re able to do,” Root said. “And so, they’re really not able to run a best-practice housing program at this point because of the Good Neighbor Plan, and to change that would require a vote of the Chapel Hill Town Council, which is an undertaking.”

The plan also has complicated funding.

“The Good Neighbor Plan stipulates that community house is a transitional housing, rather than an emergency shelter program,” Root said. “Because HUD [U.S. Department of Housing and Urban Development] no longer considers transitional housing to be an appropriate program type for homeless services, they don’t allow funding for those types of programs.”

The partnership has started a new program called SOHRAD — the Street Outreach, Harm Reduction and Deflection Program. This program helps connect those experiencing homelessness with housing and services through ongoing engagement and case management provided by clinical staff. The program hopes to avoid initial law enforcement and justice system involvement, when safe and appropriate.

“I think if folks have concerns and want to make sure that someone is checking in on someone, they have a program phone number, and they also have a program email address, so folks can say make sure you’re checking on this person or that person,” Root said.

On Franklin Street, where he had been panhandling, a 42-year-old man who asked not to be named said he was unable to find housing at IFC. He was homeless and had recently been in the hospital due to complications from a serious spine infection.

“This ain’t no everyday thing for me, asking people for this and that. I had jobs, I paid taxes. I got four kids, and I’m a granddaddy,” he said.  “It’s just I don’t go to Durham like that ‘cause I’m in a gang, and I don’t wanna bring no attention to my mom house.”

He has been to prison multiple times, he said, and now is unable to find a job because there are not many available and some jobs could complicate his infection.

“I do have people that are trying to help, but it’s a slow process. You just gotta be patient. You know how that go, but I ain’t asking for much,” he said. “I’m just trying to get enough, so I can go down to Target, get me a blanket, maybe I can get me something to eat and get me some cigarettes. That’s all I do: eat and smoke cigarettes and drink coffee. I don’t got time for the other stuff, I got a lot of stuff going on with my body.”

He said the IFC, although unable to connect him with housing, has provided him with other help

“You got to be at the right place at the right time, but they do come around. You got certain programs. Yes, they do pass out,” he said.  “I’m talking about clean blankets, brand new blankets. They pass out tents. People been getting them tents, you got some people that lying saying they ain’t got no tent. They get another tent and sell it.”

I asked him how he feels when people ignore him or treat him unkindly while he panhandles.

“It don’t make me feel like nothing. I just pray for them. And plus, I’m used to it, I can adapt and cope with it. When they go home, they’ve got to deal with it,” he said. “’Cause it’s somebody in their family probably more worser than me. And I don’t get mad over somebody else’s actions or somebody else’s thoughts. How can you get mad? It’s a blessing if somebody do help you.”

Be the first to comment on "Homeless in Chapel Hill, During a Pandemic"