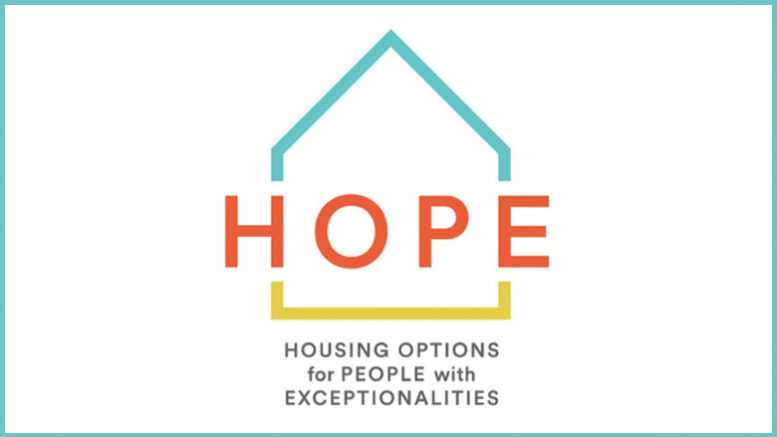 Dotty Foley of Chapel Hill and Orah Raia formed a bond that would reconnect them when Raia moved to North Carolina from New Jersey. About 18 months ago, they met Ginny Dropkin, from Raleigh, and Diane Winans, of Chapel Hill, who shared similar concerns about their adult children with I/DD.

The women met to ponder the questions, “Where are our kids going to live? Who is going to take care of them? Is their life going to hold dignity and purpose once we are gone?” Trying to answer the questions, the women created Housing Options for People with Exceptionalities, or HOPE, in 2018.

“We looked at the existing options and realized that once our children reached adulthood their choices were very limited,” said Foley. The struggle these families of children with “exceptionalities” (a term coined to cover a multitude of developmental and intellectual disabilities) is difficult during the school-age years, the parents said. When they age out, the choices are few and far between.

More than 75 percent of adults with I/DD live with their families and more than 25 percent of family caregivers are over the age of 60, according to an article published in the Disability and Health Journal. The Carolina Demography Group reports that 1.3 million, or 13.6 percent of North Carolina’s population, reported a disability in the 2012 American Community Survey and most of them don’t live in institutional settings.

Families of a child with disabilities often are faced with the choice of mainstreaming their children into public schools or placing them in separated situations. “We believe that an inclusive environment is what is best,” said Raia.

Her son, now age 34 and diagnosed with Fragile X syndrome and autism, spent time in a separated school environment when they lived in New Jersey. He thrived, she said, when placed into the mainstream environment with a one-on-one aide.

HOPE has combined its eﬀorts with another advocacy group, PACID, Parent Advocates for Adult Children with Intellectual and Developmental Disabilities. A nonprofit founded in Orange County about ﬁve years ago by families with adult or nearly adult children who have I/DD, PACID works to help families as they seek to move their children into their own personal space.

The groups’ common goal is to create what’s called an intentional community, a planned residential development designed from the start to have a high degree of social cohesion and teamwork.

“We are working together because we share the vision to create an inclusive mixed-income community where all individuals can live meaningful and purposeful lives … and have access to affordable housing,” Foley said.

Some intentional communities are currently under development across the country, including The Kelsey in San Jose, CA; Main Street in Rockville, MD and Bastion in New Orleans. The purpose with each is to create viable living communities that oﬀer aﬀordable housing as well as market-value homes to individuals with disabilities. The developments are also designed to be attractive to seniors and singles or families who would be interested in a neighborhood where people know and help each other.

HOPE and PACID members met together recently in Southern Village to provide an update of activities, highlight the next steps and enlist member involvement. “We see this [an intentional community] as a neighbors-helping-neighbors community,” said Foley. “This could be an exemplar for the nation.”

Mark Dunham, a consultant from Washington, DC, and a North Carolina native, is working with the group. He is a principal with Novum Strategies, which works to develop intentional, intergenerational communities that bring together a diversity of individuals from all incomes, ages and abilities.

“The key and the next step is ﬁnding a developer … ﬁnding one who has demonstrated skills related to aﬀordable or mixed-income housing and some understanding of disability services and supports,” said Dunham. “It is very important that the developer be open to adopting new approaches and collaborative approaches to addressing unique housing needs.”

HOPE representatives have been meeting with local agencies and developers to spread awareness of their mission. They have met with Chapel Hill Mayor Pam Hemminger, who said, via email, that “we believe that HOPE’s vision and goals align well with the town’s aﬀordable housing strategy. Disability is often left oﬀ the housing agenda and overlooked as a market need and opportunity.”

HOPE also has been in touch with the town’s Housing and Community Development Department, Foley said. “A process known as a Request for Qualifications to Identify Development partners is available to a potential developer through the Town of Chapel Hill when seeking proposals from a developer for town-owned properties. If one is chosen, the developer would then lease the property from the town in what is called a ground lease. So, the town could donate the land to the developer for a 99-year ground lease for $1 annually.”

“Donation of land would make it much more interesting to a developer who could construct 100 homes and make 20 percent for those with disabilities, which could potentially sell out the first 20 homes in the first offering,” Raia added. “We would be very excited if the Town of Chapel Hill would consider donating some property.”

The groups are not limited to seeking Orange County locations. “What we are trying to do here has to be part of a larger movement,” Raia said.

Meanwhile, HOPE is asking for community support for their efforts to:

1 Comment on "HOPE is Hopeful About Helping Adults with Disabilities"