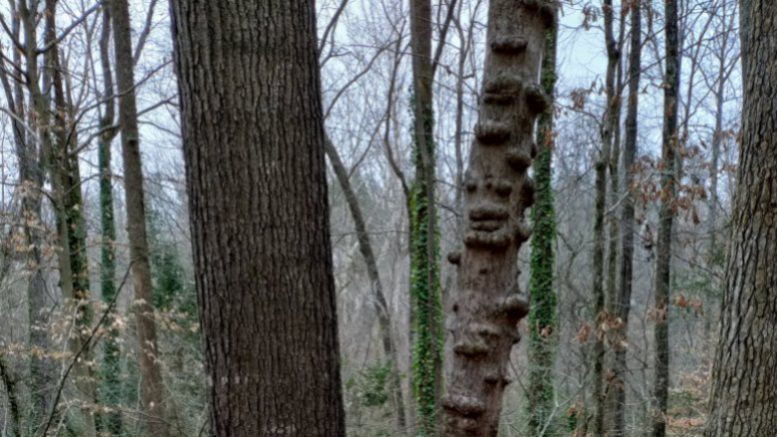 The warty witch in this tree is so pleased with herself. Can you find her face? Photo by Gregory DL Morris.

Spooky trees are a staple of Halloween decorations, and haunted forests stretch from the Wizard of Oz to Harry Potter to H. R. Pufnstuf. The real woodlands and greenways in and around Chapel Hill and Carrboro manifest many bizarre and fantastical trees from a combination of species, soil, and weather conditions. Halloween cometh, and the Thin Man snuck his way into this photo. Photo by Gregory DL Morris, with negative colorization applied.

Weird as some of those may look, the real menace is to the trees, not from them. The most recent and devastating of those is the emerald ash borer (EAB).

“We received many requests in the late summer for trees that had lost most of their leaves,” said Craig Nishimoto, founder and owner of The Treeist.

“Often those were elms that had been attacked by elm leaf beetle larvae. Homeowners were happy to learn that the seemingly dead tree would likely recover and leaf out just fine next spring. We often took the opportunity to point out that their seemingly healthy ash trees nearby would be dead in two or three years because of the EAB which is now throughout this area.”

Kelly Oten, assistant professor and extension specialist in Forest Health Forestry & Environmental Resources at North Carolina State University is acknowledged as an expert on the EAB. According to a recent bulletin she wrote, “high-value ash trees (e.g., urban, residential, parks) can be protected using systemic insecticides. Because the xylem is damaged from EAB feeding, the ability of a tree to disburse chemical decreases as the infestation grows. Therefore, it is best to begin treatments before a tree is infested.”

Studies indicate if 50% or more of the canopy has been killed, it is likely too late to save the tree. Infested trees must heal following treatment, therefore improvement may not be apparent for two or more years.

“Based on research trials, the most effective and longest-lasting treatment is a stem-injection of emamectin benzoate,” Oten wrote. “In North Carolina, that pesticide must be applied by a licensed applicator and should occur every two to three years. Applications of neonicotinoids labeled for EAB management (e.g., imidacloprid, dinotefuran) are a more economical pesticide option, but they must be reapplied annually and are not as effective in killing EAB.”

For woodlands, including greenways, pesticides are often not feasible due to application and economic limitations. N.C. State University and the N.C. Forest Service cooperates with the U.S. Department of Agriculture EAB Biological Control Program to establish natural enemies of the EAB in a long-term approach to sustainable management. Four species of parasitoid wasps have been released across seven sites in North Carolina, but they are not yet available to private landowners.

There are many ash trees in the Chapel Hill and Carrboro area—at least for now—according to Nishimoto. In riparian low points, the green ash predominates. White ash can be found in the hillier and drier areas, though less frequently.

Preventive treatments against EAB with trunk-injected systemic insecticide are available, but it is not without drawbacks,” Nishimoto explained. “The service typically costs around $10 per inch of tree diameter, measured at chest height, and should be repeated every two years. Treated trees are no longer a food source for invertebrates, greatly reducing the unique ecological role of the ash. Finally, for many ash trees in Chapel Hill, the EAB damage is already such that treatments will be ineffective. Often that damage is not apparent from ground level.”

If the ash tree will pose no hazard when it falls or falls apart, an ash may be left to fend for itself and if killed, allowed to decay naturally. The complication, Nishimoto, warned, is that ashes afflicted by EAB become particularly fragile and unpredictable.

“The removal process becomes risky and potentially more expensive,” he detailed. “Some companies will not permit climbers to ascend EAB damaged trees, so those trees may have to be removed by machines, if machines can reach them. Even then, fragile trees are prone to breakage during removal.”

Central Carolina is “on the active front as the EAB moves south,” said Mason F. Patterson, a certified arborist and state-register forester. A forester manages a wooded area, often for timber production, but the purpose also could be for wildlife or water conservation. An arborist is focused on one or several individual trees, usually in an urban or suburban setting.

A more recent sub-discipline is urban forestry, which focuses on street trees, parks, greenways, and forest fragments, as there are in and around Chapel Hill and Carrboro. The first academic program in urban forestry was started at Virginia Tech, where Patterson earned his bachelor’s and master’s degrees.

“Not all of the ashes in the area show damage, but they are on borrowed time. Specimen trees can be protected, but it is difficult to justify the cost,” said Patterson. “There is always hope for finding resistant trees or new ways to fight the invasion, but right now it looks bleak.” He is a consultant for GFR Forestry.

Patterson urged every property owner to determine if there are ash trees on the property, and to consult with a professional to make a decision. He also stressed the distinction between tree health and tree risk management. Trees are surprising in their ability to survive, even when damaged. But what works in the woods can become a serious risk when people, pets, cars or houses are nearby. Photo by Gregory DL Morris.

“You can have an old cedar, for example,” he elaborated, “that is functionally dead, but is a low risk [to cause harm or damage]. You can also have a big healthy oak that falls in a heavy rain after the first flush of leaves. The increase in surface area from the leaves and the weight of the water are significant.”

As for the great number and variety of spooky trees in this area, Patterson noted that “many deciduous trees have stems and limbs with more personality than most evergreens. In the Triangle there are a lot of hardwoods—sourwoods in particular, but also mountain laurel, bays, myrtles, and some maples—that have a lot of personality.”

Perhaps the weirdest tree phenomenon common to this area is the twisted and gnarled “evil twin.” In some cases that is a secondary stem of the same tree, but often it is a completely different species. Secondary stems of a tree can create “an evil twin,” and often the “twin” is a different species. Photo by Gregory DL Morris.

“Organic material tends to accumulate in the buttresses of a tree, or the flare of the stem,” said Patterson. “The seed of a different species can germinate and grow in those places. There are even cases of organic material accumulating in a crook or cavity of a tree, and another species growing there.”

By and large, trees are hardy creatures quite capable of fending for themselves. Removing invasives such as wisteria, kudzu, and English ivy is important. Besides that, the key is do no harm.

“Not disturbing roots is the number one thing people can do for trees,” said Johnny Randall, director of Conservation at the North Carolina Botanical Garden. “Don’t cut roots or dig around them, or compact the soil around them.”

Beyond that, Randall advocates ensuring a layer of organic matter on the ground around tree to allow both air and water into the soil above the roots. Importantly, the organic matter should be several inches away from the bark of the tree itself.

“No mulch volcanoes against the tree,” he said. “That moisture against the bark will invite fungus.”

CHCCS School Board Mandates COVID-19 Vaccination for All Staff

Be the first to comment on "Horror in the Forest: Where the Real Terror Lies"