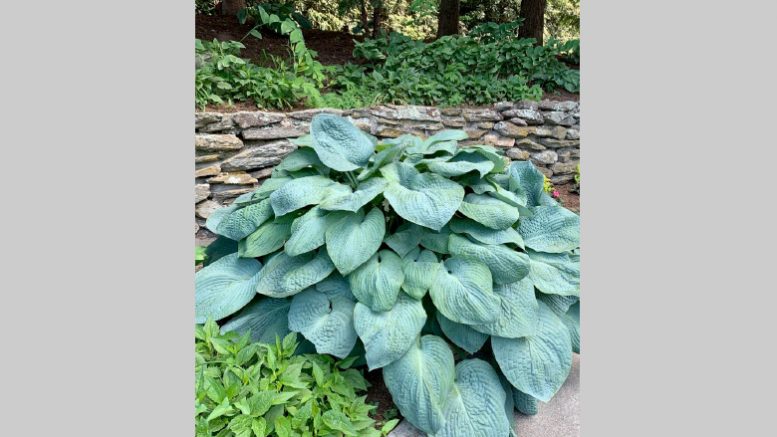 Stone wall sets off a hosta. Photo by Lise Jenkins.

I love hostas — it really is that simple. I love the many varieties of hostas, extending from blue hostas to ones with red stems. The variation of their leaves, ranging from different shapes to different color patterns, enchant me. And, best of all, hostas are pretty easy to grow.

We are also blessed to have a major hosta expert and hosta hybridizer here in North Carolina: Bob Solberg of Green Hill Hostas in Franklinton is a walking encyclopedia on hostas. He also puts out an informative newsletter on hostas, telling me things that I didn’t even know I wanted to comprehend.

For instance, did you know that hostas with white borders are now considered unfashionable? I can truthfully say that I have never pondered white borders versus green borders on hostas. A mad dash outside informed me that I was on the edge of becoming fashionable, a new situation for me: None of my hostas have white borders.

Long-season hostas fall into two categories: those that have H. plantaginea in their genetic makeup and those that come from Korea and Japan. H. plantaginea, a species of hosta, not only has fragrant flowers, it also has the delightful habit of replacing damaged leaves before its August blooming cycle.

It takes several years to produce a saleable plant from seed although tissue culture techniques in labs have shortened that time. The labs send back bundles of seedlings to the grower who then sticks them into large flats. Bob says they can “stick” 3,000-4,000 seedlings in these flats in one week.

After spending approximately eight weeks in the greenhouse, they then go to the “liner house” where they are hardened off. Called liners, these plants then are shipped to wholesale clients who will grow them into the specimens you eventually see in garden centers.

One of the advantages of being a hosta grower is that hostas throw off lots of sports, leaves that are different from the genetic parent — some of the best hostas begin life as a sport. As Bob says, “Sports are gifts from God that make good hostas great.” Contrast this attitude to ones in the 1980s when hybridizers, seeking only “true” specimens, considered sports as trash to be discarded.

Hosta hybridizers specialize in the type of hosta they want to produce. Bob, for example, doesn’t produce variegated or very large hostas although he carries them in his inventory. Concentrating on small hostas that easily fit into most gardens, he pioneers the “red” hostas, those hostas that contain red or purple pigments. For a look at Bob’s catalogue of hostas, go to: hostahosta.com.

Hostas require a certain number of cold hours, a reason they cannot grow in Florida. While you may curse the long winter nights, just remember that some plants such as hostas, peonies and lilies require them if they are to perform well for you.

The main problem with hostas is that their leaves apparently are quite tasty, especially relished by deer. Deer repellants may deter them although I must confess that they have never worked for me. And aside from H. plantaginea, I know of no other hosta that will replenish gnawed leaves during the growing season. Consequently, a damaged hosta is an acquisition that lasts throughout the summer.

The only thing that works, really works, is a fence or a barrier of some type. Otherwise, hostas are perfect plants for our gardens.

Be the first to comment on "Hostas: Plants to Enjoy"