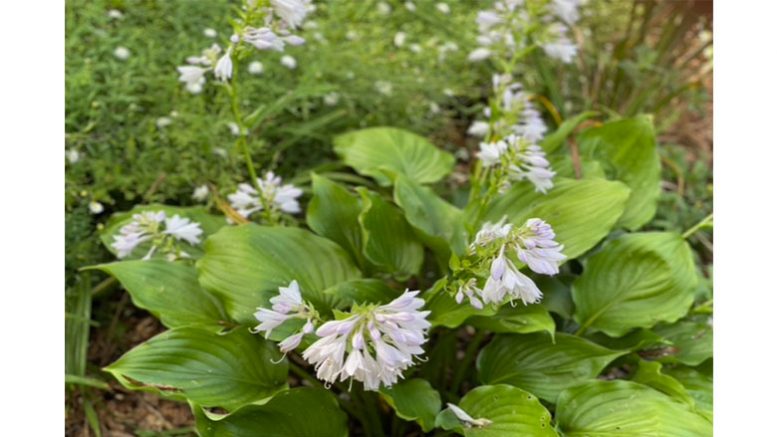 A very young Hosta 'Branching Out' in flower. Photo by Kit Flynn.

I love hostas. Because I erected a fence around my property, I am able to grow this ultimate deer candy. If you can shelter hostas from certain hooved rodents, you should consider more than their decorative leaves when choosing them for your garden.

Traditionally, gardeners ignored hosta flowers. In fact, many gardeners chose to cut them off as soon as they appeared but, today, as the saying goes, the times they are a changing. Now, I’m not going to say that we choose most hostas because of their flowers but there are several cultivars that have pleasing blooms, ones that you should consider.

In fact, I chose the Plant Delights introduction ‘Branching Out’ precisely because of its flowers. This hosta has nice leaves but it isn’t anything to write home about until it blooms, causing heads to turn. Even early in its growth pattern, ‘Branching Out’ has a myriad of stalks bearing white blooms. If you want to stop traffic with an extravagant hosta, this is the one to choose. It is not unusual for this medium-sized hosta to have 30 stalks, all bearing flowers.

One of my favorite hostas is an unusual one. H. plantaginea is a species hosta that arrived in this country from China long before many of our ancestors made the long trek to our shores. Species hostas are those hostas that appeared on their own with no help from man. Today, almost all of our hostas are hybrids, the results of intense hybridization that were developed using species hostas.

According to North Carolina’s Bob Solberg, owner of Green Hill Hostas in Franklinton, H. plantaginea differs dramatically from other species hostas. In the first place, this is the only hosta species that puts forth fragrant flowers. In the second place, it doesn’t require a cold dormancy of 3-4 weeks. Bob has even used it as a houseplant because it refrained from going into yearly dormancies when placed in warm temperatures. Another pleasing attribute of plantaginea is that it doesn’t have inflexible growing requirements. In my garden it has settled happily in a very sunny area although it can also thrive in areas of low light. Like all hostas, it appreciates a nice rainfall but I confess that I have six of them planted in an area that is hard to reach with a hose and they continue to thrive.

The all-green leaves are shiny – but the real reason to grow this hosta is for its fragrant flowers that open at night. The white flowers emit a pleasing fragrance in August at dusk. According to Bob, the large flowers (large for a hosta, that is) attract moths rather than bees for pollination.

Although some hybridizers have used plantaginea in their breeding programs, this is a hosta that is a bit reluctant to set seed. Because of its genetic differences from other hostas, many hosta breeders don’t use it. However, Bob Solberg has three cultivars derived from plantaginea that he endorses: ‘Poseidon’, ‘Parthenon’ and, especially, ‘Doubled Up.’

There are two more facts of interest when it comes to hosta flowers. Hostas bloom at different times. The early-blooming hostas are the first ones to fade in the garden, looking very ragged by the end of July or the beginning of August – this is true even if you cut off the blooms early in the season. A hosta like plantaginea that blooms in August will still look respectable in September. Just remember that later-blooming hostas maintain their appearance a bit longer during our long growing season.

Finally, the long tubular shape of the flowers appeals to hummingbirds, a decided plus in my book. Now if you can have a handsome hosta with fragrant flowers that attracts its share of hummingbirds, you’re well on your way to having a smashing garden. All you need do is protect it from the hungry deer.

Be the first to comment on "Hostas: Remember the Flowers"