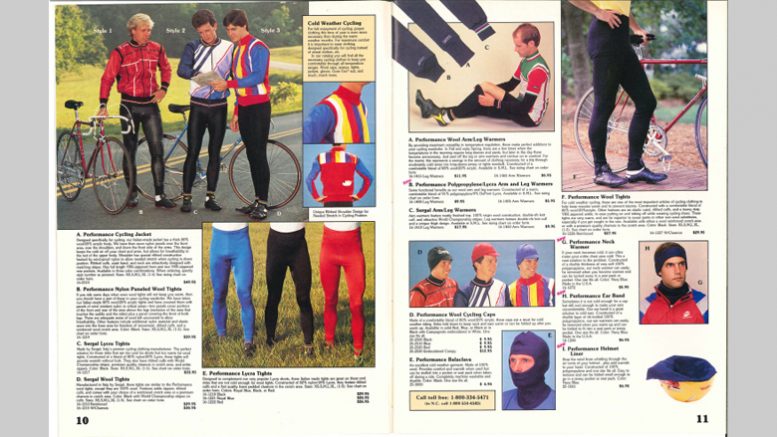 A page from a 1985 Performance Bicycle catalog. At the time Performance employees and local riders were often featured as models. Unfortunately the author was never called upon for this service.

Like any small business, bicycle shops have had to grow and change over the last 40 years in response to increasing competition as our retail economy shifted dramatically.

In the Chapel Hill-Carrboro and surrounding area of 1980, there was no Amazon, no Best Buy, no Target, no REI. I bought tents and outdoor gear at The Trail Shop on Franklin Street, then located next to Chapel Hill’s only upstairs massage parlor. My local go-to bike shop was Tumbleweed Cyclery.

For hardware I headed over to Fitch Lumber and rummaged through the rotating tin bins of nails and screws to get just the right fastener. Books were purchased at the Intimate Bookshop in the middle of town with its creaking wooden floors. And vinyl albums of my favorite bands were available just down a few doors at the Record Bar.

But as the decade began all that was changing — and the canaries in the coal mine were the bike shops in town.

As a junior high and high school student, I loved hanging out and working occasionally at Tumbleweed, but I needed more steady employment. Luckily in 1981, there was a new business in town that had to do with bikes and was willing to hire a teenager like me: Performance Bicycle.

Performance was a mail-order bicycle accessory seller that a local businessman, Gary Snook, had started in the basement of his house in Chapel Hill off Kings Mill Road. He was quickly successful and had just rented a storefront in downtown Carrboro right by the Clean Machine bicycle shop in order to accommodate his explosive growth.

You can read more elsewhere about the long and convoluted history of the company, but suffice it to say in the early 1980s it was a game-changer in the bicycle world that came along at just the right time. They produced a vibrant color catalog and shipped to the entire country usually difficult-to-find things like pumps, bicycle jerseys, imported bicycle components, tires and similar gear.

Their prices often would undercut what local bicycle shops could offer and they had a selection of things to make any bike enthusiast drool. In this age before the internet they were successful with just the mail-order business as it would be years before they opened brick and mortar shops in multiple states.

Performance hired me to basically pull and pack boxes of bike stuff for shipment. The kicker was the employee discount — 25 percent — which meant I could buy more bicycle gear, especially now that I had a paycheck to do it with. I’d ride my bicycle from my house downtown out to Chapel Hill High on High School Road, not something anyone else was doing at the time, and then after school ride to Carrboro where I’d put in a few hours packing and shipping.

At some point I must have done my homework, too. When I arrived at Performance there wasn’t any sitting around and talking shop like at Tumbleweed. The orders were pouring in and we were filling and shipping boxes out all afternoon long. It was a different crowd, too. Sure, there were plenty of bike enthusiasts, but there were also people who were just there to run a business and make a living. For me, just being able to afford an Italian Silca floor pump and new wool bike shorts made all the hard work worthwhile though.

There was trouble in my paradise, however, and it especially affected me because I straddled two worlds — the old town business of local bike shops like Tumbleweed and this brash new upstart mail-order concern that was, as we would say today, “disrupting” the normally slow and staid bicycle industry.

As Performance grew, it began to take more and more business from local shops. Tires, for example, were a shop profit center with a substantial markup. But with Performance in town, the price of replacing tires, especially high-end ones, got enormously cheaper. In fact, there were many cycling items Performance was selling at prices below or similar to the prices local shops would have to pay their wholesale distributers to obtain the very same item for a customer. If you knew what you wanted and didn’t want or need the advice of the local shop, Performance began to look like a pretty good option to many.

The local shop owners weren’t amused and often complained to their customers about the situation. Performance was seen as a destabilizing force that was cutting into the living made by the local shop trade. Some owners and mechanics would disparage the company in strong terms and encourage people to still shop at their stores instead of the newcomer. Others began to look for ways to shift their businesses to respond to the competition.

As Performance grew, I continued to work there but the bad feelings and intense dislike between my two worlds persisted. There were stories of threats to put local shops out of business and unabashed pleas by local shop workers to customers to not shop the mail-order giant.

This conflict might have gotten even more explosive than it was, but in the end this particular war in our area between the old and new was decided by overwhelming force.

Performance was such a national success that shortly after I started working at the storefront in Carrboro, the company built a huge warehouse and showroom in the spot where Carrboro’s Hampton Inn now sits near the Cat’s Cradle. This was such a significant change it became clear to local shops they would either adapt to survive in this new environment or not survive at all.

Trying to profit on bicycle components and accessories was largely given up and local shops began to focus more on repair services and new bike sales.  Not everyone could adapt and some local shops did close, but Tumbleweed and The Clean Machine were the most successful in making the change and managed to survive.

And me? I was relieved that the conflict between my worlds was calming down and I still was welcome in both places.

These days there’s a bit of revolution in the bicycling industry. One driver is the emergence of a national mountain bike league for middle and high school students. Our state version is the North Carolina Interscholastic Cycling League. Huge growth in participation (full disclosure: I co-coach the Phillips Middle School team) drives bike sales and repair work locally.

In addition, the continued development of high-end mountain bikes that enable both more interesting and exciting riding advances the sport. And the technology involved has gotten more complex, thus more need for skilled mechanics at our local shops. Finally, the bike shop business is booming in the current health crisis as people newly look to bikes for ways to get outside for enjoyment or community when many other avenues are closed.

Service and expertise are a key component of success for current bike shops and other more local ventures in the face of a new competitors and huge changes. Independent bookstores in town like Flyleaf Books, outdoor stores like The Great Outdoor Provision Company and bicycle shops like Trek, Back Alley Bikes and The Clean Machine, offer a mix of new and old ways of doing business.

If the current moment has taught us anything, it has brought the realization of the importance of local businesses to our economy and well-being. Big changes happen over the years, but our community has a long history of adaptation and eventual success. Even though times are hard now, this gives me faith that we will overcome our current challenges, whether in the bicycling world or elsewhere.

Meanwhile, I’m going for a ride. 1 Comment on "How Businesses Adapt When New Competitors Arise"