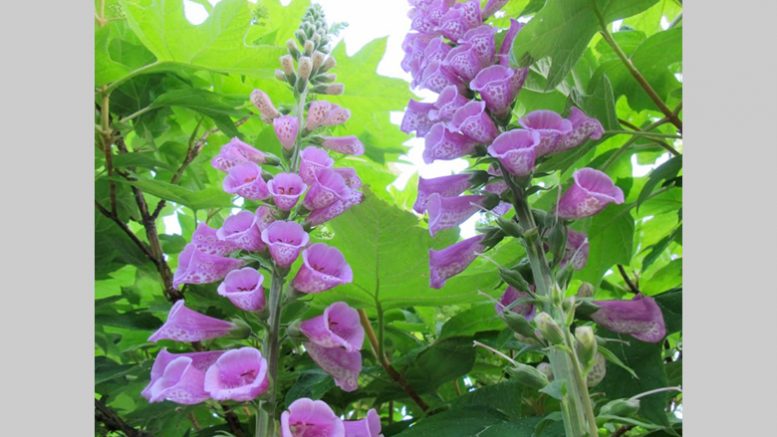 When I’m thinking about a plant I like to start at the beginning, with its name.

Today, I’m thinking about foxglove. A few weeks back, Kit told you a foxglove plant mysteriously appeared in my garden. After much debate, she and I concluded that my garden gnome was responsible for planting foxglove seeds. Maybe the seeds arrived by bird, by garden gnome or Kit’s imagination. I think when Kit wrote her article, she may have been deep into QIDS: Quarantine-Induced Derangement Syndrome.

Nevertheless, wanting to know more about the pretty foxglove blooming in my garden, I reach for my copy of Stearn’s “Dictionary of Plant Names for Gardeners.” Stop right there, I can hear your eyes rolling — a dictionary of plant names can be riveting.

Today we use a bi-nominal nomenclature system, developed by Carl Linnaeus in the 1730s, to identify organisms by their genus and species. These Latin names can be tongue-twistingly dense. While it’s tempting to rely on common names, try decoding the botanical Latin, as often you are rewarded with a little story about the plant in question.

My newly-arrived foxglove is Digitalis purpurea. The first part of the name, Digitalis, describes its genus, which is comprised of about twenty species. All these plants share a trait identified by the name of their genus: Digitalis.

My Stearn’s dictionary tells me Digitalis derives from Latin for “finger” — the “flower is like a finger of a glove.” A Google search for the Digitalis genus splashes images on my screen of plants sharing that trait: finger shaped flowers.

The second part of the name, “purpurea,” is the species. Stern translates it as “purple.” If you decode the botanical name, Digitalis purpurea, you arrive at a recognizable description: purple finger-shaped flowers.

Learning the Latin translations for description of color and size is a good start for decoding plant names. Many of the basic building blocks may be found on Wikipedia’s helpful list of botanical word translations: en.wikipedia.org/wiki/Glossary_of_botanical_terms.

Armed with the botanical name, the common name “foxglove” seems about right. But before we conjure images of foxes moving through our gardens wearing wee purple gloves you should know there’s a story behind that name, too.

For that part of the story I turned to Anna Pavord’s “The Naming of Names: The Search for Order in the World of Plants.” I should confess to what you may already suspect — I am a bit obsessive about plant names. An entire shelf in my office groans with plant dictionaries, Latin primers and botanical history books; don’t judge me too harshly.

Pavord’s book chronicles our evolving relationship with the botanical world. For much of our history, physicians relied on plants to treat their patients; as such, they needed to accurately identify beneficial plants to communicate these benefits to other practitioners.

My foxglove’s story starts with a German doctor who, in 1542, published a massive herbal tome. In addition to written descriptions, his book was the first to include detailed drawings and an improved indexing system. These improvements made the book wildly popular and a financial success.

Foxglove was included in the good doctor’s book because the extracts derived from it were used to treat heart conditions. Today, some cardiac patients are still treated with a class of medications called digitalin.

The 16th century book-writing German doctor’s name was Leonhart Fuchs — his surname translates into English as “fox.” He applied the genus Digitalis to describe our plant, soon thereafter it was commonly referred to as Fox’s glove.

Pulling on the thread linking the 16th century to my newly-arrived garden resident allows my mind to drift a bit. I am grateful for my garden’s ability to transport me, if only for a little while.

How to Kill a Tree

What Makes a Great Plant?