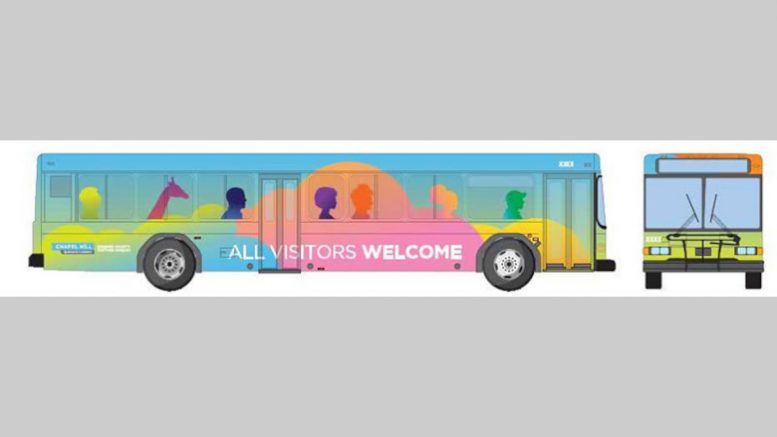 Before the pandemic, an average of 7 million people a year used the Chapel Hill bus system. And each and every one of them rode for free.

This is remarkable and remarkably wonderful. Since 2002, not a single passenger has paid a dime to ride a bus operated by Chapel Hill Transit. How does this even work? Is there such a thing as a free ride?

Brian Litchfield, Chapel Hill Transit director, suggests that, instead of calling it free transit, you might want to look at it as a pre-paid fare program.

“The university is paying for all their employees and students to ride, including hospital and healthcare staff. The town of Chapel Hill and Carrboro are pre-paying their fares via property tax and vehicle registration fee. So, while there is not a fare to get on the bus, it’s definitely not a free system.”

The system is now the second largest in North Carolina, behind Charlotte, and helped Chapel Hill win a City Livability Award back in 2009.

Here are the numbers:

Chapel Hill Transit’s budget is around $25 million annually which includes operating and capital. UNC puts up about 38 percent of that total, followed by 18 percent from Chapel Hill itself, with another 7 percent from Carrboro. State and federal assistance combines for 28 percent, with the remainder coming from small charges and fund transfers. The budget grows about 8 percent a year in wages, benefits, and fuel costs, says Litchfield, and the partners must find ways to increase their share by that much — and even more if they want service expansion.

It’s quite an operation already. Litchfield said (pre-COVID) Chapel Hill Transit operates 93 fixed route buses and these routes use the 40-footer larger buses. “And then we have 18 demand response vehicles for Easy Rider service (physical and cognitive disabilities.) And we have other maintenance and service vehicles. 29 are hybrid buses, and as of June we will have 3 electric buses with 7 more on order. We hope to transition to lower emission vehicles. Our future goal is to have zero emission vehicles.”

Brian explained that there are still a lot of unknown variables about zero emission vehicles, and it’s an area they will monitor closely. “A standard bus for us lasts about 15 years. In California, the longest they have had electric buses is 5 years. We are betting on a new technology, but we don’t know how it will perform over twelve or thirteen years. Will they be able to handle the heat? Will it be able to cool itself? Will the batteries, that power the bus and HVAC system, give us the distance we need in 95-degree heat? There’s still some questions that we need to pilot.” “Our fare free system has many benefits,” says Carrboro Council member Damon Seils, a liaison to Chapel Hill Transit. “It has been successful because of the partnership the towns have with the University.”

But there is always room for improvement. “We’re working to increase service in the evenings and weekends, particularly along the MLK Corridor, where we are pursuing a bus rapid transit line.”

Litchfield said the system is still running on a scaled-back basis, but they hope to be back to full service in August.

When you work in tourism, many local denizens, and some of them quite famous, share their ideas with you about the town and how to show off its charms. Last year, we received a call from D.G. Martin, Independent Broadcast Media Professional, man about town, and old school raconteur. May Martin Bryan with D.G. Martin who is a big fan of sharing easy fare free routes with visitors.

“I have a great idea,” he said. “I call it the Pauper’s Tour of Chapel Hill. It uses the fare free transit system to give visitors an easy and relaxing ride around town.”

It is a great idea that involves hopping on the U route, which stops every 15 minutes, to see dozens of highlights on campus and downtown Chapel Hill. See this route here: https://www.orangecountync.gov/1710/Visitors-Bureau Then the Pandemic hit. But this is an idea we’re going to revisit soon. It’s a good time to remind our visitors of Chapel Hill’s pre-paid bus system and the glory of our town on the Hill.