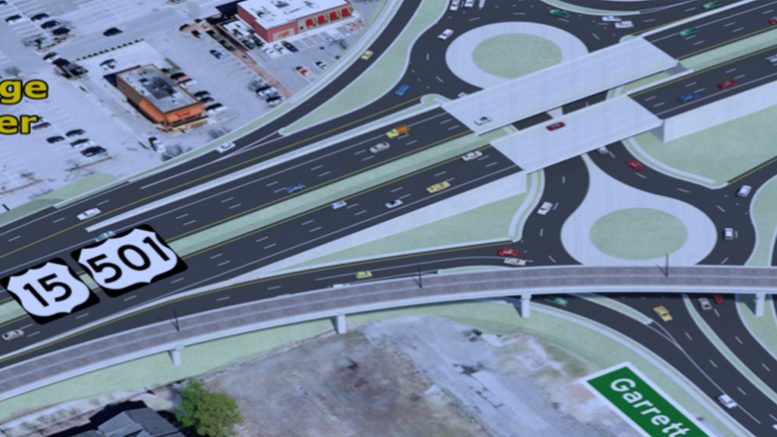 U.S. 15-501, the major road linking Chapel Hill and Durham, is likely to undergo significant change in the years to come. The question now under debate by several different organizations is what that change will look like.

The Reimagining 15-501 Corridor Study has taken on increased urgency with the termination of the Durham-Orange Light Rail Transit project. The N.C. Department of Transportation and the Durham-Chapel Hill-Carrboro Metropolitan Planning Organization have acknowledged the need to identify a new alternative that would accommodate high-capacity transit, improve bus access and study substantial alterations to the 15-501 transportation corridor, which extends from Ephesus Church Road in Chapel Hill to University Drive in Durham.

So far, there are three alternative versions of the proposed project. All versions involve conversion of 15-501 to a six-lane road with elimination of service roads. There would also be a “superstreet” intersection at Ephesus Church Road, like the one that is located at the Erwin Road/Europa Drive intersection. In order to cross over Fordham Boulevard, the driver must turn right, then make a U-turn followed by another right turn, and another superstreet at the Sage Road/Scarlett Drive intersection.

Additionally, all the plans envision two new roads crossing I-40, one to the north of 15-501 and one to the south. One version of the plan includes a bus-only lane along 15-501. The plans also show increased facilities for bicyclists and pedestrians.

Several public meetings on the plans recently have been held to engage the community. The project also was discussed at a recent meeting of the Chapel Hill Transportation and Connectivity Advisory Board.

Some participants at the meetings expressed concerns that the DOT/MPO plans did not coordinate well with Chapel Hill’s traffic plans for the new Wegmans grocery and the UNC Health Care project in Eastowne, both of which access 15-501 near the I-40 interchange.

Audience members also wondered about the proposed north connector road over I-40, which would bisect one of the last Natural Heritage old-growth forest areas in North Carolina east of the Appalachians.

At the TCAB meeting, several board members expressed concern that the diamond design of the I-40/15-501 interchange would not provide a safe path for bicyclists or pedestrians to cross over I-40 on 15-501 from Chapel Hill to Durham.

There was also some discussion of a preference for high-speed roundabouts rather than superstreets at congested intersections.

The corridor study extends into Durham and presents different traffic handling techniques than the superstreet intersections proposed for the Chapel Hill portion of 15-501. The high-capacity double roundabout with overpass as shown at the Garrett Road intersection with 15-501 that can be seen here: https://www.ncdot.gov/news/public-meetings/Documents/U-5717_Visual_image_Alternative_C_Map.pdf

This type of intersection of a high-traffic corridor and a major cross street with significant traffic allows no vehicles to be stopped waiting for multiple stop lights as they pass through the intersection or make any turns. The construction of double roundabouts, however, is more expensive and may require more right of way than is presently owned by NCDOT.

Conventional roundabouts are shown in the Durham portion of the plan for several other lower traffic corridor intersections. There are no superstreets proposed for Durham.

The 2017 Traffic Impact Analysis done for the Blue Hill District (Ephesus-Fordham area) that modeled traffic along the 15-501 corridor in Chapel Hill for the year 2030 indicated that a number of failing intersections rated “E” or “F” would result unless significant remediation occurred.

The 2017 study was based on the assumptions of both the presence of Wegmans as well as the DOLRT project removing a significant number of vehicle trips. However, the plan for up to 2.8 million square feet at the new UNC Health Care medical campus at Eastowne currently under construction was unknown, and thus was not considered in the 2030 corridor modeling.

A new TIA is now in the specification process that considers the absence of the DOLRT project and the existence of the UNC Eastowne medical campus. This TIA will also incorporate the new 15-501 Wegmans full-access entrance and exit plan now being designed to connect the southern Eastowne entrance to the UNC Health Care campus.

Future development of the Reimagining 15-501 Corridor plan will be managed by a subcommittee of the DCHC-MPO. The time frame for continuation of the project is not clear at this time.

More information about the 15-501 corridor study can be found at: https://reimagining15501.com