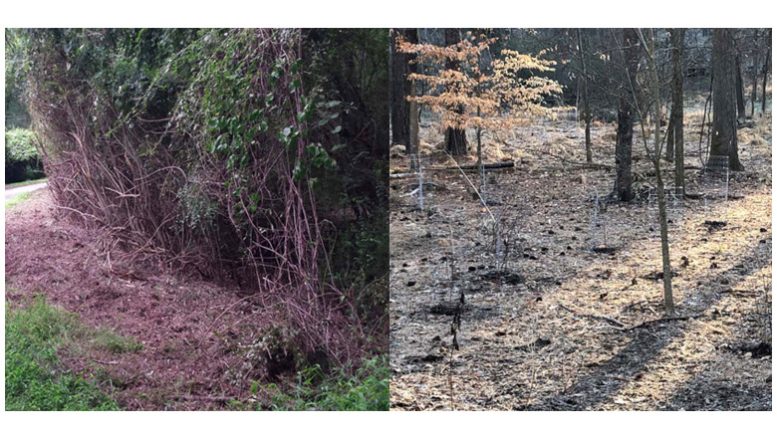 On the left, an image of Booker Creek from 2018. On the right, an image from 2022 after the forest was cleared by volunteers. Images courtesy of Jeanette Bench.

By Linda Li, The ECHO

Quiet, relaxing, with greenery underfoot, all around and above. At Booker Creek in Chapel Hill, you can easily find a place in the woods to sit down and absorb the beauty of nature. Most can hardly believe that a few years ago, Booker Creek was only a trail with no way to walk into the solid, impenetrable wall of surrounding woods. Behind them, few knew about the creek and surrounding boulders hidden away.

Now, however, when you walk into the woods, there are huge rocks and large logs you can sit on. There are no fallen trees or branches in your way; you are just in a natural garden. Kids can play around and teenagers can find a quiet place just to chill.

“[It is] truly amazing; you don’t need a playground. They’re like ancient rocks to climb on,” said Jeanette Bench, a member of the town’s Parks, Recreation and Greenways Commission who established the Booker Creek Volunteer System in Jan 2018, which has been largely responsible for creating the current area cherished by residents. “I asked the kids where they wanted to go today. And they want to go climbing on the rocks [in Booker Creek] which were totally inaccessible before. So it’s very gratifying.”

The Booker Creek Volunteer System has been in progress for five years. Their work includes beautification, clean-up and restoration of the creek.

“We’re doing a rehabilitation of Booker Creek that has been taken over by a lot of invasive plants, mostly privets,” Bench said. “Then we’re taking those out and replanting native trees, shrubs, and pollinator gardens.”

The invasive privet plants originally came from Asia and were able to thrive in Booker Creek because of its similar climate. The privets have dominated the wood, preventing any of the native vegetation from growing, harming the ecosystem in Booker Creek.

At the project’s beginning, Bench and her friend Michael Everhart went out near the creek to dig up invasive plants and replant the elderberry from his garden.

“I started with a neighborhood and some adults. It was kind of going along; 15, 20 people showed up, but a lot of people are in their 60s and this is pretty physical work,” Bench said.

Then the Youth Leadership Club from the YMCA of the Triangle came on the scene, with a team of energetic middle and high school volunteers who work on volunteering projects.

“I love to volunteer [at Booker Creek],” said sophomore Alina Xie. “We do outside activities, we get volunteering hours, and most importantly, we get to help the environment to be even better, prettier and more green. I am so proud.”

“I get 60, 80, sometimes over 100 people. I didn’t think [the program] would grow like this, but as long as the kids keep wanting to come, I can’t retire again [because Booker Creek still needs my help]. And we might actually get the entire 11 acres done, which is amazing,” Bench said.

Volunteers affirm that the best aspect of their work is that while everyone contributes a small part, such as cutting a few trees, in the end the achievement is impressive and it belongs to everybody.

“You may have cut your little piece [of trees], but at the end of the day, there are six feet high [of the trees people cut done] by the trail, you’re like, ‘We really did something collectively today.’ It just feels good,” Bench said.

Bench’s husband Neal is interested in getting some of East’s art students involved in painting some of the pipes around Booker Creek.

“[My husband said] there are a ton of pipes in town, and it would be really cool to have students’ designs and artwork on them,” Jeanette Bench said.

Although progress has been successful, Bench’s team has encountered some problems along the way. In 2021, the Town planned to turn 11 acres of the forest that the group has been working on into a stormwater basin, removing all of the trees they had planted.

“So we went to work reading 600 pages of the study and all the details to realize that it was going to happen to all the trees we had just planted.” Bench said.

Bench and her team took each Town Council member down to the woods to show them the potential consequences of cutting down the trees for the stormwater basin. What would happen to their hard work during the years?

“The basin would have removed more than 70 percent of the forest. I would have never paid attention to the stormwater plan if I wasn’t so invested in the restoration of the area,” Bench said. “[Our team] spent a great deal of time organizing the citizens to get the basin projects in town stopped.  With a great deal of help from the interested citizens the Town Council removed their approval of the basins and formed a working group to look at alternatives.”

Over the past four years, there have  been over 600 volunteers, including the Bench team and Chapel Hill students, who have joined in on the effort to beautify Booker Creek.

Image 1 of 6
To volunteer at Booker Creek or help paint the pipes around town, email Jeanette Bench at jeanettebench82@gmail.com