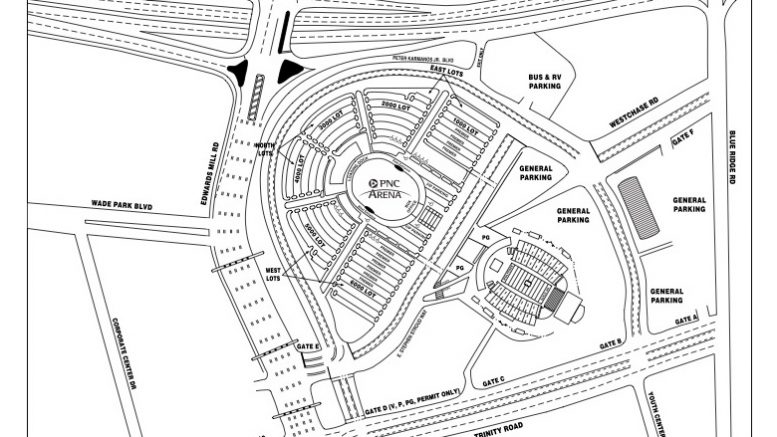 With the Stanley Cup quarter-final series between the Carolina Hurricanes and New York Rangers tied at two games each, there was much discussion about the relative strengths and weaknesses of each team. There is no debate, however, about one clear advantage that Madison Square Garden has over PNC Arena: public transportation.

Fourteen subway lines, two commuter rail lines, and many local and express bus routes serve Pennsylvania Station adjacent to MSG, or Herald Square one block east. In contrast, no public transportation serves the Hurricanes’ home ice. Fans have no option but to drive and pay for parking: $20 during the regular season, $25 to $50 for the current round of the playoffs. And while tailgating is a strong tradition in the region, congestion at departure time is a persistent problem.

To be sure, the Triangle region has a well-developed bus network. And both the capital city’s GoRaleigh and the regional GoTriangle systems have routes that go near the arena. But none are practical for hockey or any evening event because of proximity, frequency, connection or time of last run.

One important reason is that parking is a revenue stream for the arena, so neither the team nor the governing bodies have any incentive to encourage transit. At the same time, the intermittent nature of travel to the arena makes it a planning challenge to transit operators. The regular daily travel is very small and the event travel is very large in two short bursts. Special-event service runs up against the shortage of drivers to operate regularly scheduled routes.

“GoRaleigh does not currently provide regular service to PNC as this venue has a small daily workforce,” said Andrea Epstein, senior communications liaison for the City of Raleigh’s Transportation Department. “There just are not enough trip origins or destinations to justify a dedicated route outside of special events.”

As for those special events, “GoRaleigh does occasionally provide special services which are budgeted and funded within GoRaleigh’s annual operating budget,” Epstein added. “Those services must be advertised and the adopted fare structure must be utilized. An example of this is Park-and-Ride services to the NC State Fair during pre-COVID periods. Services to PNC for other special events are currently not budgeted by GoRaleigh.”

She noted that “all U.S. transit agencies are experiencing driver and overall labor shortages. GoRaleigh is concentrating on our core services to ensure we meet the needs of our daily riders. If requested by PNC, GoRaleigh could certainly look at the type of service requested and the associated funding to determine if it would meet federal requirements.” Specifically, those requirements prohibit federally funded equipment and facilities from competing with private charter companies.

“We mirror what our partners at GoRaleigh have stated regarding bus service to [Hurricanes] games,” said Melody Hunter-Pillion, chief communications officer for GoTriangle. “We are under the same regulations. There are certain requirements that have to be met regarding funding and staffing for special bus services. In the future, GoTriangle CEO Charles Lattuca, along with our GoTriangle operations team, would have to sit down with the Canes and PNC Arena to ascertain if we can get those requirements met for special bus services.”

On an optimistic note, Hunter-Pillion added, “looking further ahead, incorporating connections to commuter train service for major events in our region, when requested, could be a feature of our proposed Triangle Commuter Rail Project. This is not an unusual practice in other cities that run special train services for events; however, there are processes to consider.”

PNC Arena is owned and operated by the Centennial Authority which was created by the North Carolina General Assembly in 1995 “to study, design and provide a first class, multi-purpose facility for the region,” according to its website. There was no answer at the arena main number when TLR called for input to this story.

“NC State’s total inventory available for public parking in this area is actually 13,792 spaces. This includes 8,642 spaces in stadium and arena lots, as well as 5,150 additional general admission spaces. There are no plans to operate a shuttle service or open other parking areas at this time,” she said.

Looking ahead, “we value our partnership and want to continue to help PNC Arena and the Hurricanes be successful,” she added. “As a primary tenant and partner of PNC Arena, short and long-term impacts to NC State need to be considered in any planning or decisions. While we are interested in enhancements that might improve the experience for our fans, supporters and student-athletes, we also have to protect NC State’s ability to provide the best fan experience, generate revenue, and remain competitive in the ACC in men’s basketball and football now and in the future.”

The state fairgrounds are also within walking distance, but the State Fair declined to say why its parking is not made available to the public for events at the arena.

For the record, all seven of the other hockey teams in the NHL’s Metropolitan Division with the Hurricanes have frequent regular public transportation to their arenas. All the arenas list transit options on their websites. The newest is home to the Islanders and opened last year in Queens, near Belmont Park racetrack. Its website states “UBS Arena is accessible via public transportation and by car. Although there is parking available, it can sell out in advance depending on the event. We recommend purchasing parking in advance as well as the use of public transportation.”