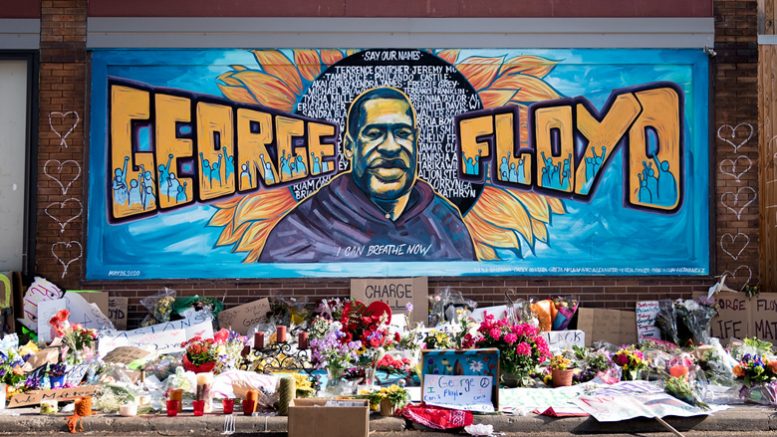 I watched the video of the killing of George Floyd in Minneapolis and, like most, am sickened and angry — the kind of angry that compels many to leave their homes in the midst of a deadly pandemic to literally shout in the streets for social justice.

I also want to be in the streets, lending my voice to outrage. But, there are so many ways to be outraged about Mr. Floyd’s tragic death, I am overwhelmed.

And, the biggest outrage I feel is directed at myself.

I am outraged and angry at myself for my continued optimism that the American ideals of equality and justice and “commonwealth” have a “long arc” — i.e., progress may be slow, but we ultimately move toward a more just society. I don’t want to think that an optimistic view of society is only a luxury afforded white people like me, despite America’s long, overt history of racism.

But, “duh on me.” I now don’t know how it could be otherwise. Mr. Floyd’s killing has made me feel that American racism — deep, rampant and violent — is intractable.

I am outraged at myself for a sense of video-voyeurism and helplessness: standing by powerlessly in my living room while Mr. Floyd was being slowly killed on my television. I am saddened and heartened that there appears to be several people on the scene who urged humanity, who made attempts to intervene over a period of several excruciating minutes during which Mr. Floyd was treated as an animal.

I am outraged at far too many police departments that operate like gangs, but I am also outraged at wholesale outrage directed against police people, most of whom I know are good-hearted “peace officers” working to better their communities.

I don’t think the (former) police officer meant to kill Mr. Floyd, but rather render him unconscious, using a dangerous neck-hold technique unwisely used sometimes by Minneapolis police, and was either included in a training manual or expressly forbidden, depending upon with whom one consults.

At a minimum, it’s evident that police training needs an overhaul.  Anytime a citizen is injured by an authority of the state, endowed with special powers, equipment and training, it is a failure of policing and should be reviewed like medical cases for causes and improvements.  If I am pulled over by police, I will now be fearful, even though I am a white, middle-class person. I cannot imagine if I were a non-white person.

I am outraged that we are pushing each other to the brink, testing our democratic institutions to the fullest, and beyond. I think the late Supreme Court Justice Antonin Scalia, whose “originalist” view of the Constitution is notorious among us liberals, suggested that we can’t look to the courts to resolve every social issue.

I am outraged that I agree on anything with Antonin Scalia, but much more I am outraged at me: perhaps for complacency; perhaps for my ignorance; perhaps a lack of empathy, or energy, or my (formerly) unbridled optimism in a Hamiltonian democracy where good people prevail.

I am outraged that Mr. Floyd’s graphic, video murder is proving a kind of personal tipping point; I should have been tipped over long ago. I am outraged that George Floyd will never be a real person to me, but a symbol of social dysfunction — a chalk-outline meme all that remains of his humanness.

I am outraged that we’ve not just abdicated our responsibility of social stewardship, but have become gluttons willfully pillaging whatever we can from each other.

Be the first to comment on "I Helped Murder George Floyd"