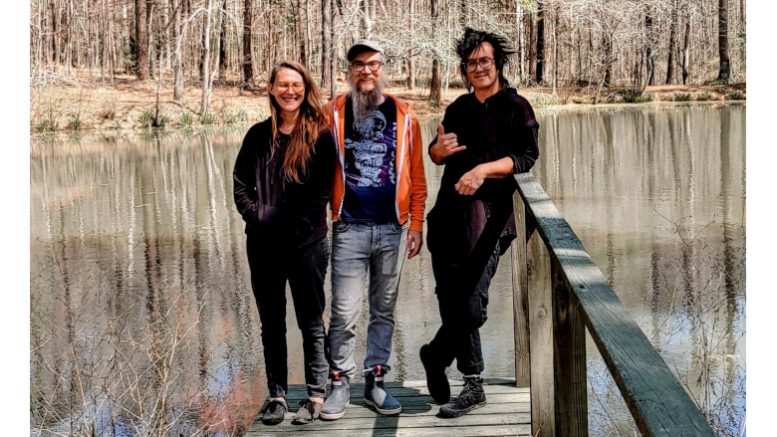 New York City artist sTo Len is visiting Chapel Hill to make art using trash collected for him along the Haw River in Chatham County. He’s in residence at local artist retreat LEVEL and will show new works at Peel Gallery in Carrboro. The exhibition opens April 8 and will be available for viewing through the end of the month.

sTo Len is primarily a printmaker who collaborates with water in his art. He is currently Artist in Residence at the NYC Department of Sanitation, where he has some large public projects and collaborations with sanitation employees in the pipeline, as well as print and video works.

During a March 25 rooftop artist talk at Attic 506, Len described the development of his present focus, which is his own reworking of traditional printmaking methods. Taking cues from Japanese calligraphy, sumi ink prints floating in water, and the Japanese fish printmaking technique Gyotaku, Len makes prints both in polluted waterways and by inking collected detritus from the same waterways.

Len calls his prints, “petrochemical petroglyphs,” images of the discarded plastic and other waste material with which humanity has fouled the rivers and seas. At the center of Len’s work is water. “Water as a theme and a medium crept very slowly into my art practice but once it did, I found not only a muse but a collaborator,” he said. “That became a jumping off point to merge my interests in artmaking and public engagement.”

The World Economic Forum estimates that, if current trends continue, by 2050, the oceans will contain more plastics than fish (by weight). Similarly, according to Greenpeace, rivers around the world carry an estimated 1.15-2.41 million tons of plastic into the sea every year. The sheer volume of garbage in waterways and oceans is compounded by the fact that plastics don’t biodegrade.

“No one in NYC sees the water surrounding,” Len pointed out. “I’ve always been drawn to the marginal spaces in a town. The longer I explored these areas the more I became interested in their histories, which often involved heavy industrial pollution. The more I learned and witnessed this firsthand, the more I became a better environmental steward.” Views from sTo Len’s Chapel Hill visit. Clockwise from top left: Len’s rooftop artist talk at Attic 506, a group of locals on a walk along Morgan Creek Trail with Len, the same group by the creek, and the group walking up to Merritt’s Pasture. Photocollage by Pamir Kiciman.

One of Len’s techniques is based on Suminagashi, a traditional Japanese printmaking method that uses floating ink to marble paper.

“In sTo Len’s tsunaminagashi series (a play on the traditional suminagashi form), Len cedes control to nature herself, as he impresses on paper the surface pollutants that permeate our water sources,” wrote Lauren Turner, Associate Curator for Contemporary Art and Special Projects at Ackland Museum of Art.

The other traditional form Len has modified is Gyotaku or ‘fish impression,’ which started as a way for fisherman to record their catches and became an art form of its own. Len, who is fond of wordplay, coined these prints Gomitaku or ‘trash impression.’

“I literally came to town with nothing pre-made, which is a bit scary, but I accepted that whatever happens, happens,” Len said. “I arrive with my tools, my previous knowledge, and a fluid mind and just go. Right now, I am in this series of Gomitaku and allowing North Carolina to inform and shape it.”

He describes Gomitaku as an intimate process. While inking and rubbing discarded objects, he gets to know them quite well and thinks about who picked them up for him and also who threw them out.

Marie Rossettie, co-founder of LEVEL Retreat, finds this approach liberating. “Creativity is dismissed so quickly. Someone can look at your work for half a second on social media and just keep scrolling. Residencies allow an opportunity to explore new mediums and experiment with ideas,” she said. Rossettie and BJ Warshaw established the LEVEL Retreat in 2016. During the pandemic, “[we] saw a real need among local artists who were cooped up and isolated during COVID lockdowns,” said Warshaw. “We opened LEVEL for a series of ‘daycations,’ allowing local artists to relax and break up the monotony of the pandemic.”

Subsequent grants from the Orange County Arts Commission have allowed LEVEL to offer longer residencies and invite artists from other places.

Rossettie and Warshaw keep a list of artists they want to invite to LEVEL, and Len figured prominently on it. “We love his reuse of discarded materials, and the resulting works have a mysteriousness about them that draws you in and sparks the imagination with questions like ‘What discarded piece of trash made that shape? Where did it come from, where is it now?’” said Warshaw.

Peel Gallery is dedicated to supporting the work of emerging, mid-career, and under-recognized artists, according to owner and gallerist Lindsay Metivier. “We’ve had a relationship with BJ and Marie from LEVEL for years and our missions are very much aligned. Although our exhibition programming is set through 2023, a gap appeared at the right time for Len’s show,” she said.

For Len, the process of printmaking has elements of ritual. “I get the tools set up, I cut paper and stack it, I often light a candle and set up an altar of objects,” he said. “When I work on large prints, it’s very physical. I work on the ground, walk on the print, put all my weight into it, go into a kind of trance.”

Len acknowledges art, per se, won’t necessarily remedy the various anthropogenic environmental crises we currently face. “It’s a lot cheaper to make virgin plastic than it is to buy recycled plastic and so manufacturers just keep making new plastic,” he said. Nonetheless, he feels art and activism encourage mindfulness. “People have told me they think about me when they see trash,” he said impishly. “Certain waterways have been put on the map for them by my work and they tell me they look at their local waterways differently.”

He also notes there is evidence that exposure to petrochemicals can cause endocrine disruption in humans and wildlife, and plastics are now found not only in air, water and food but also in human blood.

“We are the progeny of our toxicity,” Len said. “We are being born with plastic in our bodies, hybrid plastic human beings. It’s something to acknowledge and certainly be concerned about.”

Len’s new show, Shadow Assembly of the Haw, will have an opening reception April 8, 6-9 p.m. at Peel Gallery, during Chapel Hill and Carborro’s 2nd Friday art walk. Peel is open Wednesday through Sunday, 12-5 p.m. and will exhibit Len’s new artwork that is specific to North Carolina through the end of April. Be the first to comment on "Images of Water and Waste: Artist sTo Len’s Residency at Chapel Hill’s LEVEL Retreat"