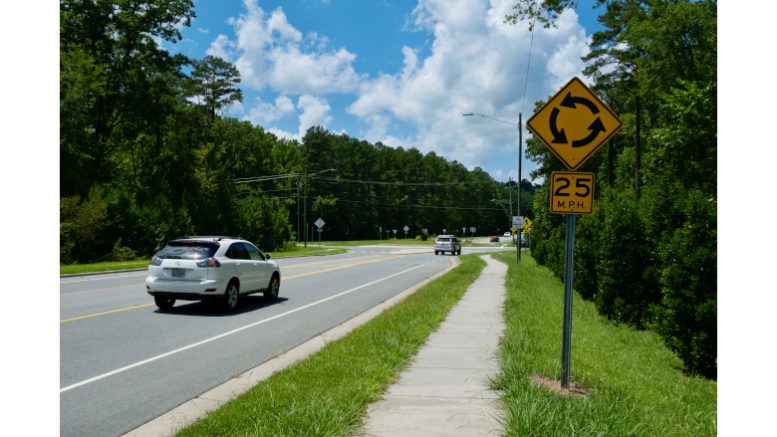 Traffic engineers love roundabouts, for good reasons. Roundabouts offer better traffic flow than traditional lighted intersections. They also reduce severe crashes by up to 80%, cost less to maintain, and cut down on air pollution. These benefits help explain why over 4,500 roundabouts have been built in the U.S. since 1990.

In a 2021 review of the literature on roundabouts and bicycle safety, Utah State University professors Niranjan Poudel and Patrick Singleton found that roundabouts can yield an overall increase in vehicle-bicycle crashes. Most of these crashes (67-82%) occur because motorists fail to yield to cyclists when entering or exiting a roundabout. The problem, as traffic safety researchers describe it, is one of drivers “looking but failing to see” slower-moving bicycles.

The most dangerous roundabout designs, Poudel and Singleton found, are those with multiple lanes, no physical separation for bicycles, and motor vehicle speeds that are higher than bicycle speeds. With single-lane designs that offer no physical separation for cyclists, it’s also better not to have painted bike lanes within a roundabout but instead allow cyclists to use the full lane.

There are now three roundabouts in Chapel Hill and four in Carrboro, plus one more at the Ephesus Church Road/Pope Road intersection in Durham County, just outside Chapel Hill’s town limits. Are these built to maximize bicycle safety? Not if maximizing safety means physically separating bikes and cars. That high standard, par for the course in Sweden, is met nowhere locally. Here, cyclists must either take the lane in hopes of making themselves seen, trusting motorists to yield, or opt for the sidewalk (if there is one).

On the up side, local roundabouts are of the safer, single-lane variety. Yet center islands here tend to be low, allowing drivers to be distracted by traffic on the far side of a roundabout instead of focusing on vehicles right in front of them. Guidelines in other states call for roundabouts to be built with center islands that rise 3.5 to 6 feet above the adjacent roadway.

Speed is the biggest problem. Posted limits are higher than the recommended 18-mile-per-hour standard, and sometimes poor design fails to slow drivers much at all (see photo of Ephesus/Pope roundabout).

The Elliott Road Extension/Ephesus Church Road roundabout now being built is likely to be a prime spot for trouble caused by excess speed. Drivers approaching this location from the east on Ephesus average 40 miles per hour (the posted limit is 35), and some drivers go much faster. In an era of higher and heavier vehicles, these speeds are deadly for cyclists and pedestrians.

My experience with local roundabouts affirms that while most drivers are attentive and considerate, many are not. It happens regularly that a driver will speed up to try to enter a roundabout ahead of me, cutting me off at the entry point, or will fail to yield when I’m in a roundabout. I once had a driver zip past me on the right as I was entering a roundabout.

Experiences like these—the close calls that don’t show up in official statistics—suggest we need to do more to get drivers to see cyclists and pedestrians, yield as they should, and slow down at roundabouts. I say this as an experienced cyclist who is not easily daunted by traffic. For people in the “interested but concerned” category—people who would ride bikes if the roads were safer—good roundabouts are even more important.

So what can be done?

Better signage is also needed. The “Bike Lane Ends” signs that now appear at roundabout entries are ambiguous; no doubt some drivers take these to mean that bikes don’t belong in the roundabout. These should be replaced with signs that say “Bicycles May Use Full Lane,” which have been found to send a clearer message to motorists. Adding shared lane markings (“sharrows”) would help reinforce the message. I asked Bergen Watterson, transportation planning manager for the Town of Chapel Hill, if there is any prospect of building roundabouts that physically separate bikes and cars. “I hope so,” she said. “I would love to see that.” But this kind of construction is expensive, and the North Carolina General Assembly has made it hard for municipal governments to get funding for projects that primarily benefit cyclists and pedestrians rather than enhance motor vehicle flow.

Another problem is NCDOT control of local roads. This state-level control can make it difficult for communities to take simple, sensible actions—lowering speed limits, posting better signs—that cost little. Overcoming this problem will take ingenuity and more political will than has so far been evident. But that’s what needed if we want to get more people on bikes and prevent close calls from becoming tragedies.

Why I Am Not Going to Buy an E-Bike