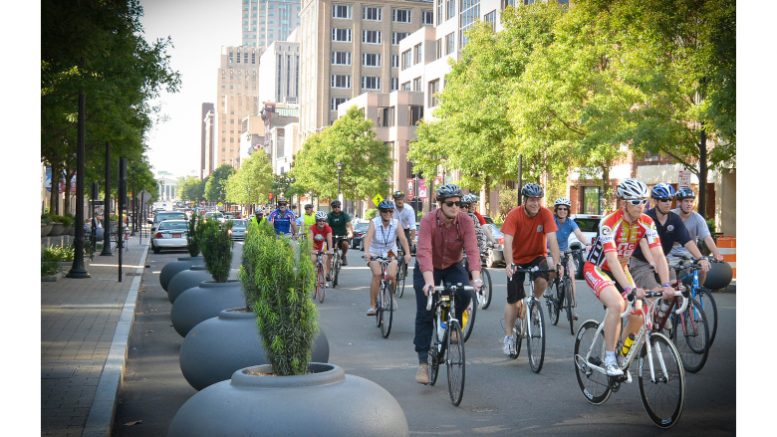 It’s hard for a cyclist to complain about Weaver Dairy Road. A rebuild eight years ago created wide bike lanes on each side, from Martin Luther King Boulevard to Erwin Road. Counting Weaver Dairy Extension on the west and Sage Road on the east, bike lanes run four and a half miles — from Fordham Boulevard to Homestead Road. It’s a sweet stretch.

Yet there remain a few sour spots; small problems, mostly. Putting these right would make Weaver Dairy even safer and friendlier for cyclists. It wouldn’t cost much and lives might be saved. The intersection of Fordham Boulevard and Old Durham Road can be daunting for cyclists. Photo by Michael Schwalbe.

West of Fordham, where the bike lanes begin on Sage Road, all is well until the roundabout where Sage meets Weaver Dairy. The problem here is not so much the roundabout itself — though roundabouts are generally not great for cyclists — as it is the signage that encourages unsafe motorist behavior.

Instead of signs that say Share the Road or Yield to Cyclists Entering Traffic Circle, we get Bike Lane Ends. Was that message pretested to find out how motorists interpret it? To judge from how often drivers try to cut me off as I approach the roundabout, I suspect that many take it to mean Bikes Don’t Belong Here.

A fix would cost little: smarter signs, along with sharrows — those arrow-like pavement markings indicating that cyclists can take the whole lane. Yes, drivers can become sign blind after a while. But that’s why we need signs everywhere — signs that reinforce a share-the-road mentality and help to create a local roadway culture in which safe driving vis-à-vis cyclists is the norm. Uninviting signage at the intersection of Sage Road and Weaver Dairy Road. Photo by Michael Schwalbe.

More aggressive bike lane maintenance is also needed. Gravel and broken glass accumulate at the sides of a road. If bike lanes aren’t kept clean, cyclists must swerve into traffic to avoid tire-shredding debris. This compromises the safety value of bike lanes.

Weaver Dairy Road is supposedly swept weekly by Chapel Hill, “equipment, weather and staff permitting,” according to Town staff. But I’ve sometimes seen the same bits of debris persist in the Weaver Dairy bike lanes for weeks. I’m not the only one who’s noticed the problem. Other local cycling advocates have also called for more frequent sweeping of bike lanes.

Another sour spot comes at the intersection of Weaver Dairy and Martin Luther King Boulevard. In trying to cross Martin Luther King, cyclists are again stymied by a lack of bike-detector loops. Cyclists must either wait for a car to trip the light, ride on the sidewalk to get to the pedestrian button, or wait until traffic clears and then zip through against the light. A timing adjustment is also needed here, so that the light doesn’t turn red when a cyclist is only halfway through the intersection.

I realize there are bureaucratic and political obstacles to making even minor upgrades to roads that are, like Weaver Dairy, owned by the state and controlled by the N.C. Department of Transportation (NCDOT). Permission is required for any changes, and I’ve been told that the NCDOT is reluctant to permit changes that might slow motorists. How hard is it to get permission? Some cycling advocates and local officials say it is despairingly difficult, requiring costly studies to justify any change. Some Town staff said that smaller changes — signage, painted lanes, bike-detector loops — are sometimes readily allowed. It seems fair to say that the process needs to be streamlined and tipped in favor of enhancing safety, not auto speed.

To be sure, the problem is not a lack of ideas. Carrboro’s 2020 Bike Plan and Chapel Hill’s Mobility and Connectivity Plan are visionary. If these plans were fully realized, we would be living in a cycling paradise. But unless state-level politics change such that funds are allocated to pay for standalone bike and pedestrian mobility projects, much of what these plans propose will remain out of fiscal reach.

In the meantime, the more public input, the better. Cyclists who see roadway problems, have ideas for improvements or want to praise the good, should contact Town transportation planning staff: Bergen Watterson, Josh Mayo, or Jordan Powell. Every nudge helps.

As Chapel Hill grows, more cars, busier intersections, and more roundabouts will raise the hazard level for cyclists throughout the area, great plans notwithstanding. But as with Weaver Dairy, some problems can be solved now, inexpensively. Making Chapel Hill a more attractive place to live depends on doing these little things right, things that are often easier to see from a bike than a drawing board. Michael Schwalbe is a professor of sociology at North Carolina State University. He has lived in Chapel Hill since 1990.

2 Comments on "Inexpensive Fixes to Sweeten the Ride"