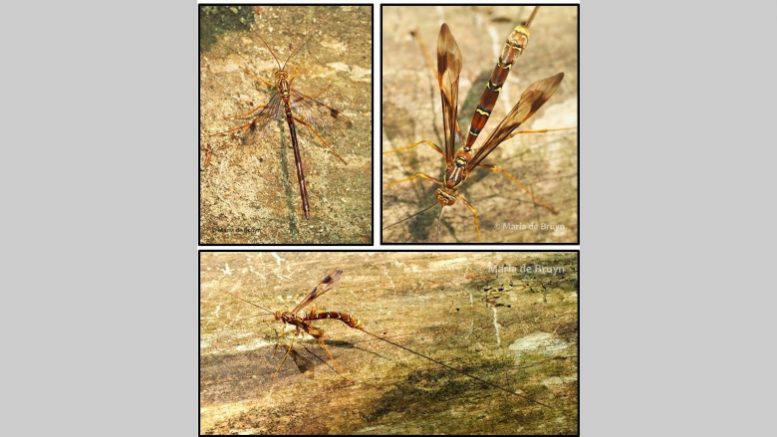 This past May, I had the opportunity to experience both wonder and awe when observing two interesting insects busy with life events. While not many people aside from entomologists pay much attention to the “creepy crawlies,” they are well worth watching.

The first exciting event I witnessed was long-tailed giant ichneumon wasps preparing for reproduction on a nature trail in Chatham County. It was easy to distinguish the females (above, right) from the males (above, left) because the former had very long ovipositors, a tubular organ through which a female insect lays stored eggs, (above, bottom). In the species I saw, the ovipositor can be 4 inches long!

There were several male and three female wasps flying about. None of them showed the slightest interest in the large human looming overhead. Even if they had, I needn’t have worried, because these wasps don’t sting people.

The mothers-to-be probed a disintegrating fallen log searching for the best spots to lay their eggs — they needed to identify where the larvae of horntail wasps were buried because the ichneumon wasp offspring will eat those as they prepare to overwinter until they emerge as full-grown wasps in the spring.

At certain points during the process, the female wasp had part of her ovipositor coiled up in a transparent pouch at the end of her body. Then she would push out the ovipositor and appeared to smooth it out with her legs. The literature I read about the wasps did not explain this movement, but I thought she may have been pushing eggs down the tube.

A female wasp inserts her eggs while hanging upside down under a log. Photos: Maria de Bruyn.

When she finished this smoothing movement and had found the right spots for her offspring, the two protective lining filaments separated from the ovipositor itself, and she inserted it into the log. It was a fascinating process to witness.

My other exciting insect event involved a moth. Last fall, a cecropia moth put its cocoon on the door jamb of the women’s restroom at Cane Creek Reservoir. The reservoir’s manager feared that it would be damaged there and asked whether I would be willing to care for it over the winter. I took the cocoon home and kept it safe during the fall, winter and much of this spring.

One evening at the end of May, I entered the house from my screened-in porch, where I had been working, to watch the news. When I came back after about 20 minutes, I spotted a large, brilliant moth on the screen. My youngest cat spotted it at the same time so I shooed her inside. The cocoon scarcely had a hole in it; I really wish I’d seen how the huge moth got out. In any event, I was enthralled with what a gorgeous creature he was. Cecropia moth, before and after it emerges from its cocoon. Photos: Maria de Bruyn.

The cecropia moth, with a wingspan up to 7 inches, is North America’s largest moth. The males and females look similar but the males, like the one pictured above, have larger, more feathery antennae. Female moths emit pheromones that the males can detect from up to a mile away. After mating, the female lays up to 100 eggs. Both sexes die after about two weeks as they lack functioning mouths and digestive systems and don’t eat.

The moth’s short adult lifespan must have made this guy anxious to get underway. Very soon after I removed him from my porch and took him outside (never touching him with my hands), he began vibrating his wings. In less than a minute, he launched himself upwards and flew toward the top of the nearby tall pine trees, setting off on his quest for a mate.

I sincerely hope that he found her and that the two of them were able to collaborate in ensuring a new generation of this stunningly beautiful species. And I was grateful for having agreed to overwinter the cocoon, as it enabled me to contribute to the propagation of this wonderful moth.

Be the first to comment on "Insects Can Be Exciting!"