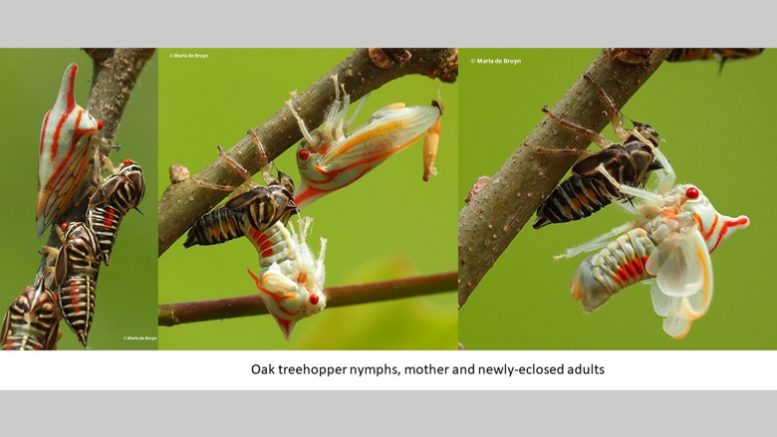 When out taking nature walks, our attention is often drawn to the easily visible wildlife around us, such as birds flying by, squirrels scurrying up tree trunks and chipmunks dashing across fields and grassy areas.

But other members of the wildlife community are also interesting — moths, pollinators and tiny bugs that live on and eat plants. Stopping to look at the ground, rocks and plants can reward us with views of fascinating creatures.

This was brought home to me yet again during a walk at the Mason Farm Biological Reserve, when I had the chance to see the eight-spotted forester moth, a real beauty with black and white wings and orange tufts on its legs.

While walking around the Rainbow Soccer Fields, I came upon another gorgeous moth. There are two species that are very similar in appearance: the Virginian and the agreeable tiger moths. They look like they are wearing a fluffy white cape and woolly white leggings. The Virginian species caterpillar is yellow and commonly known as the yellow woolly bear. Like other moths, they have beautifully “feathery” antennae.

As you peer carefully at the ground and shrubs, you may see eye-catching damselflies called ebony jewelwings. The males have a stunning metallic blue-green coloring; females have dark gray wings with white spots. Scurrying along the ground, you may see metallic green- or blue-colored insects with white spots. These are the six-spotted tiger beetles, who spend time on sunny logs and paths looking for their prey.

And if you look carefully at young trees, you may spot odd-looking growths on the leaves — they may look like brown or green bumps or cones. These could be sheltering the offspring of gall wasps, which do not sting humans. A recent growth on a young oak tree in the forest at Jordan Lake had me stumped as to what it was. Resembling a small ball of cotton candy with red-tipped protrusions, it looked like no other plant or insect growth I had seen before. Eventually, helpful bug enthusiasts helped me identify it as the gall of the wool sower wasp, which has an interesting life cycle.

Finally, I’d like to share with you a fascinating small insect that I saw emerge into adulthood at the Jordan Lake Educational Forest. I was passing another young oak sapling and noticed some movement along the trunk and small branches. Approaching more closely, I saw numerous insects of similar shapes but vastly different colors (see banner photos at the top of this column).

Some had black and white horizontal stripes, while others were bright white with a few white and yellow vertical stripes along their bodies. I waited and watched to see what they were doing and finally realized that I was seeing adult insects emerge from their nymph stage, a process called eclosure. I was able to identify these beautiful creatures as oak treehoppers. They were quite small. It was only when I saw my photos that I could fully appreciate their appearance, another reason to have a camera or phone handy!

Although schools will be opening again in the next couple months, some of you might want to help your children learn more about insects. Here are a couple of resource pages to help you along. Have a nice walk the next time you are out!