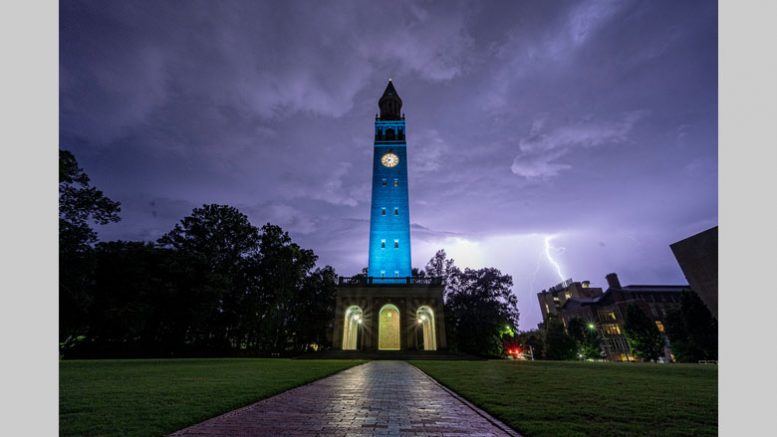 Scratch me, and you get a photographer. It was photography, not writing, that got me to the dance.

So, it should come as no surprise that this column is photo-driven — meaning that the photograph comes first; the image inspires the text, as opposed to a finished essay in search of an illustration to embellish or attract attention. Some folks might call this a photo blog.

This week I want to unpack the spectacular photograph above that just appeared on the cover of the latest issue of the Carolina Alumni Review magazine. When I first saw the shot of the Bell Tower and lightning strike, I admit my first thought was, “Fake!” and, “Photoshopped!” and, “It can’t be real!”

But when I read the photo credit, I was delighted to see who captured the stunning image. My old colleague Grant Halverson, UNC ’93, and chief photographer at the late great Chapel Hill News, 1998-2002, wouldn’t countenance anything but authentic visual truth.

So, what’s the back-story on this photograph? Firing off an email, I wrote, “Maestro! How’d you get that amazing shot?”

‘Maestro’ — my left earlobe…
I was (just) in the right place at the right time.
The General Alumni Association was staging a virtual Bell Tower relighting for the first day of classes, so I was out there to do video for social media — which means I was already on a tripod. The storm was rolling in with a lot of lightning, which I thought might make a good feature shot, so I switched the camera (Nikon Z6 mirrorless, Nikon 14-30/4 Z-mount lens) back to stills mode. I always carry a wired shutter release, so I recomposed, set the camera to RAW mode and started bracketing exposures.”

OK. So now we have Grant in position as the storm is rolling in from the west. He’s got about 10 minutes before all heck breaks loose right over him. But in that time, the experienced photojournalist knows how to shoot lightning. It’s done by spotting a distant cloud that is producing consistent lighting strikes and setting your camera (on a tripod) with a very slow shutter speed of one to two seconds. And here’s the trick, you trip the shutter release over and over, before you see the lightning, hoping that while the shutter is open, there is a lightning strike.

Then it was all fast-twitch reflexes and leaning on a long exposure. Settings for the one we ran: ISO 500, f11, shutter speed of 1.3 seconds. I shot close to 300 frames; this is the only one that caught an actual bolt. But you only need one, right?

Indeed, and Grant’s photograph is — to invoke that terribly overused word — awesome.

Living in this digital age that is so rife with seamless photo-fakery, it just makes it all the more imperative that committed documentary photojournalists produce authentic images. Grant’s photograph truly exemplifies the Old School photographer’s mantra of “f/8 and Be There.”

Be the first to comment on "It’s the Real Deal, Lucille"