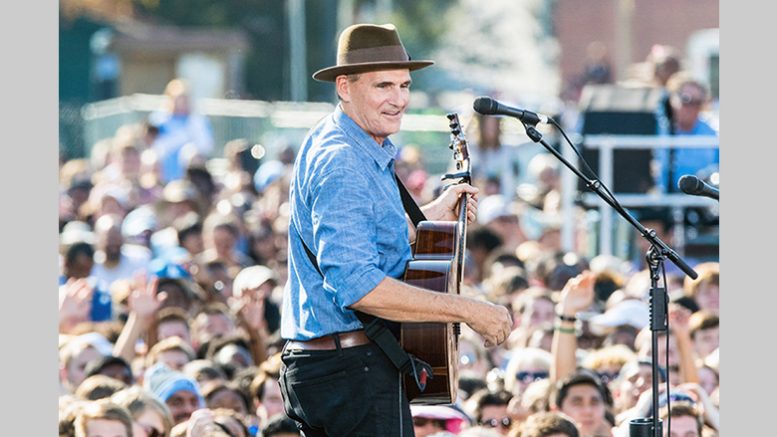 For better or worse, icons never seem to grow old. They’re ageless, frozen in the moment they became a part of our lives. So it is with James Taylor, whose open, handsome and boyish twenty-one year old face looked back at us from the cover of his second album, “Sweet Baby James.” Even though the album was released in 1970 – fifty-one years ago – he hasn’t really changed since.

That being said, James Taylor turns an impossible 73 on March 12th, and we’d like to wish him a happy birthday. Chapel Hill has celebrated James Taylor for decades, in part because he has celebrated us for just that long. “Carolina In My Mind,” from his first album, has become the unofficial anthem for UNC students, faculty, staff and alumni, and considered by many to be the unofficial state song. Written during a bout of homesickness when he was in London recording at Apple Records for the Beatles, the song not only evokes Carolina – “Can’t you just see the sunshine? / Can’t you just feel the moonshine?” – it’s also a paean to every heart who has ever longed for a faraway home. James Taylor has been an ambassador of song, a world-famous busker whose voice is somehow soulful and country at the same time – not unlike Chapel Hill itself. There’s a bridge named after James Taylor here. It’s at the intersection of 15-501 and Mt. Carmel Church Road. You may have driven over it without even knowing it, but it was christened “James Taylor Bridge” in 2003, so, like James himself, like all of us, it is getting older too. Taylor has written of the bridge“which I am so flattered to know, bears my name. Morgan Creek and environs are the physical landscape of my fondest early memories, and I delight in the connection that the good people of Orange Co. have established.”

As a kid, James Taylor would play with his dog in Chapel Hill’s Morgan Creek, the specific inspiration for the song “Copperline.” But Chapel Hill’s inspiration and influence is easy to hear in so much of his work, in the easy-going poeticisms and humor, the love of nature, the open-hearted, and sometimes broken-hearted, elegies. Like Chapel Hill, his songs feel like they’re surrounded by trees. James Taylor during his childhood days in Chapel Hill

His father, Isaac Taylor, was born in Morganton, N.C., and attended UNC in the late 1930s, later becoming Dean of the medical school. Taylor’s mother, Gertrude ‘Trudie’ Taylor, was an activist for civil rights and would walk the picket lines at Chapel Hill’s movie theaters. In 1969, you could not go to the Carolina or Varsity Theaters if you were black.

James, born in 1948, has been a witness to Chapel Hill’s progressive ideals, his timeline paralleling the ongoing support and nurturing of rights his hometown hopes to personify. In his way, through his music, he has contributed to Orange County’s evolution.

Beneath the aforementioned James Taylor Bridge, there is a small beach. Chapel Hill resident Bobbi Wilkins recently wrote to the town of Chapel Hill to have March 12th designated James Taylor Day and the beach below the bridge Taylor Beach. “I keep it clean,” she wrote. “It is a beautiful area.”

A bridge and a beach: we can’t think of a better way to celebrate this favorite son. His songs are a bridge between his heart and our own. And the beach? Well, it’s a beach, a place to go to relax, to be a part of nature, and to sing.

The Copperline Chronicles: A History of the Kings Mill – Morgan Creek Neighborhoods, is a new publication produced by The Chapel Hill Historical Society. https://chapelhillhistoricalsociety.org