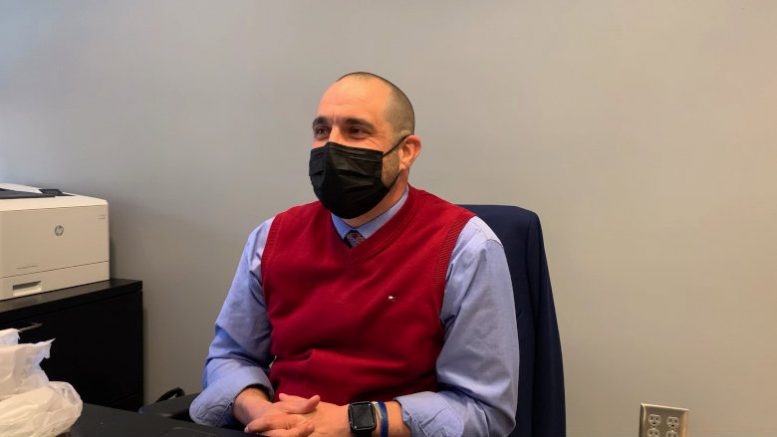 By Henry Koonce, the ECHO

Double-masked and clad in a yellow bowtie, Jesse Casey stepped outside to speak with me over Zoom. Casey’s leadership was on full display as he delegated staff to secure himself 20 minutes alone, employing a warm and direct communication style that comes after decades of managing adolescents. Once he had gained some peace and quiet, he gave me his full attention, eager to share himself with his future students and staff at East Chapel Hill.

Casey was originally born in Charlotte before moving to Virginia at the beginning of middle school. He says he was a diligent student, pushed to succeed by his father, a teacher and N.C. State alumnus.

Casey played three sports all through high school and cornerback for the College of William & Mary’s football team. His experiences as an athlete led him to pursue coaching, which has continued to inform how he conducts himself.

“I still feel like I’m kind of a coach in a way as a principal and as a leader,” Casey said. “Kind of use the team atmosphere, the team values and some of what I do as a leader”

Casey served as principal of the Campus of Virginia Randolph, which served middle-schoolers alongside high-school students in alternative/career-and -technical-education programs. Casey believes his experiences in alternative education will aid him in addressing problems at East.

“I know that East is high achieving, but there are also some gaps, and I feel like the experiences that I’ve had here in working with students who have some specific needs and have gaps will help me at East,” Casey said.

Even in his first year of teaching, Casey was finding ways to support the students at Creekwood Middle School. Creekwood was athletically successful, but some students approached Casey with another way to get involved.

“The kids came to me and talked about wanting to start a step team, and not that I can do it or anything but… my wife happened to be in a sorority that was known for stepping, so I knew that I had resources,” Casey said. “So my first year there we started a step team… that step team ended up being a nationally recognized step team on the middle school level. It’s been well over 20 years since then, and they are still in existence today… It’s something that I’m proud to say that my wife and I started from scratch.”

While Casey is looking to become involved from the outset, he isn’t looking to make any big changes before he gets integrated into the school community.

After wearing so many different hats throughout his career, Casey is excited to return to a traditional high school format, hoping to foster relationships with East’s student body.

“I’m really excited to join the East family… I was really impressed with the culture of the school, the staff, but most importantly, what drew me to the school was the students. I was impressed, impressed with how insightful [they were] and the kinds of questions they asked me. They really sparked more passion in me and so I just can’t wait to be there and be amongst everybody.”