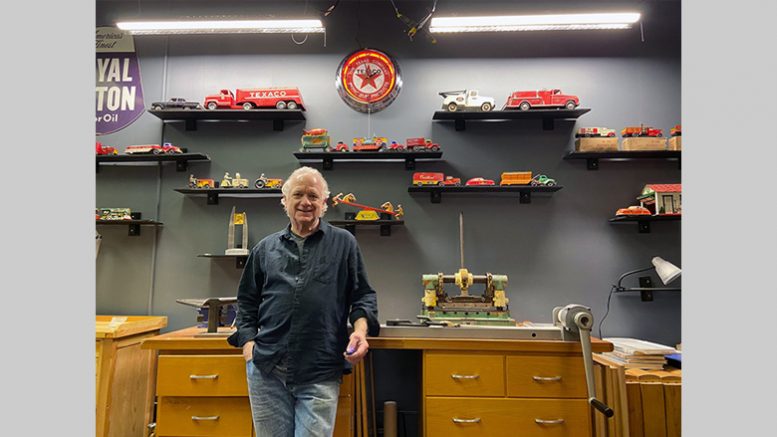 Jimmy Carter loves to create beauty and have fun in his Carrboro studio﻿.

Not that Jimmy Carter, the 39th President of the United States from Plains, Georgia. We’re talking about the other Jimmy Carter, the metalsmith and jewelry shop owner in Carr Mill Mall. He is who we’re appreciating today.

“Our politics are not dissimilar,” Carter says. “And it’s because of him that I got involved in Habitat for Humanity. I am grateful to him for that.” Additionally, both Jimmys are chill and smile a lot.

But here the resemblance ends and art – his art – begins. Carrboro’s Jimmy Carter is an artist of metalsmithing and cloisonné, a type of jewelry that involves using wire or metal dividers to separate the various colors of enamel that lie on a metal base. His works have a character that feels ageless and contemporary at the same time, delicate and finely fabricated, pictorial and abstract. Carter has built a vast collection of fine metals pieces, enamel and stone. His pins, pendants and beaded necklaces, wrought in gold of varying karat weights, are a product of where his imagination and sense of design meets the artist’s hands. Carter’s passions stem from a life of wanderlust, curiosity and a desire for change – very American qualities. He came of age in the 1960s and felt fenced in by the world he was born into – “the blue-collar realities that surrounded me,” he says. “I tried to sit in the classroom, but I wanted to hitchhike and backpack and travel. So I hit the road, stuck out my thumb and embarked on the lessons of life.”

He found a job in the Merchant Marines, moving cargo and passengers hither and yon. It was on one of these ships he discovered what was to be his future.

“I was sitting in the cafeteria when a fellow worker walked by wearing an impressive bracelet. I asked if I could buy it. He said no but there was hobby group down the hall teaching you how to make one.”

This is how Carter was introduced to the art of jewelry-making on the open sea. Not only did he make a bracelet, but folks began offering him money for his designs. The more intricate designs he made, the more he sold.

Back home his mother encouraged him to study with a master jewelry maker, so he enrolled at Florida State University, receiving his Bachelor of Fine Arts degree under William Harper, followed by a Master of Fine Arts from Southern Illinois University in 1987.

For eight years, he honed his skills and business acumen on the outdoor craft show circuit, then in galleries, museum shows, and exclusive craft shows. Along the way, his work was featured in several periodicals. He has received the Saul Bell Award, Florida Arts Council Grant, and most recently, an award of excellence at the Smithsonian Craft Show.

But what led Carter to Carrboro was family, not art. Jimmy and his wife Diane lived in Florida for many years until they adopted a baby girl from China, whom they named Camille. “We knew it was time to consider relocating and we wanted to be near strong schools, a top-notch pediatric hospital, a supportive congregation, and a progressive community. We were introduced to a great Chinese immersion school in Durham, so we relocated there. One day we drove around Chapel Hill and Carrboro and when we saw the Weaver Street lawn, the folks playing music, throwing a Frisbee and hanging out, we knew we found our future home. I fell in love with the building and later signed a lease for my office, moved to Chapel Hill. Today it still feels right.” Carter is also a teacher. His Carrboro jewelry making studio is dedicated to teaching metalsmithing, jewelry techniques and cloisonné enameling [see below]. He’s had students travel from as far as China to learn his techniques. A long and winding road to have ended up here, happily among us. Our Carter’s life and journey echoes something the other Carter said about America some years ago. “We have become,” the 39th President said, “not a melting pot but a beautiful mosaic. Different people, different beliefs, different yearnings, different hopes, different dreams.” The heart pendant is still a popular Valentines Day item.

Jimmy Carter: “Around Valentine’s Day my biggest sellers are hearts. I’ve been making them for 30 years and I still enjoy it. The price hasn’t changed much either. ($350.00). My bestseller is a heart pendant in sterling silver and comes with a black silk cord.

The price includes all materials, instruction, teacher and assistant. 90% are return students.

Be the first to comment on "Jimmy Carter: An Appreciation"