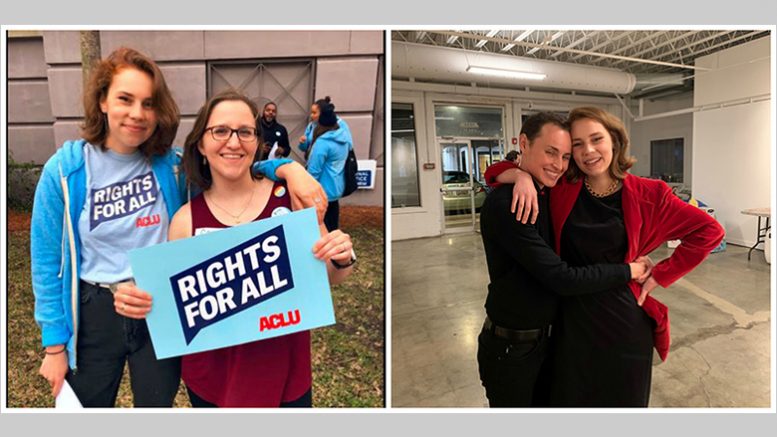 Emily Walter, Carrboro High School graduate and member of the ACLU staff in Charleston works hard to assure rights for all.

Every year in June, various events are held to recognize the influence LGBTQ people have had around the world. June was chosen because that’s when the Stonewall Riots took place, way back in 1969.

LGBTQ or Gay Pride is a movement that celebrates gender and sexual diversity. LGBTQ stands for lesbian, gay, bisexual, transgender and queer people. Gay Pride protests discrimination and violence and promotes dignity, equal rights, and self-affirmation while increasing society’s awareness of the issues they face.

“Our North Carolina community has a long-standing reputation as the most welcoming place in the state for the LGBT community,” says Lydia Lavelle, Carrboro’s mayor, the state’s first openly lesbian mayor and member of the Chapel Hill/Orange County Visitors Bureau Board. “This is not the case in many communities, and we recognize that we are so fortunate to feel so welcome and a part of the community here.”

Lavelle, and many other local and former leaders have been terrific at reminding the Visitors Bureau about the importance of recognizing all communities who live and visit here.

Recently, I had the opportunity to learn more about changing perspectives — and pronouns — when my 24-year old daughter came home for two months to quarantine working remotely from our kitchen.

One day, after overhearing a Zoom call I was on with our advertising agency, talking about a new LGBTQ video we were producing for the travel market, she gave me some feedback: I was getting my pronouns wrong. She suggested I work a little harder at that.

She was right. I respect and support people who don’t identify their gender as the one they were assigned with at birth; it’s how this affects the language I’m struggling with. They, their, she, hers, he, him . . . I don’t know how to use the new language in a sentence, and as a professional communicator, I should.

Times have changed and I want to know how to change with them. Since its founding in 1999, Transgender Day of Remembrance is held around the world — and at UNC — each Nov. 20 to honor the memory of transgender people whose lives were lost due to acts of anti-transgender violence. Pictured: April Callis

My daughter suggested I talk to her former Carrboro high school classmate, Emily, who now works for the ACLU in Charleston and whose partner is non-binary. They are preparing to move to Chapel Hill for medical school at UNC. Here’s a bit of my conversation with them.

Tell me about pronouns? I am a well-meaning, empathetic, professional and I’m clueless about this subject.

“The first thing to know about gender is that it exists on a spectrum. We’ve been conditioned to see things in a binary way: male or female. In reality, gender is a social construct that humans have created along with the roles and expectations that can be tied with how we identify. Other than our names, pronouns are one of the main ways that we are identified. If you don’t identify with the gender you were assigned to at birth, you might choose different pronouns that fit your identity. This is called “misgendering.” To prevent misgendering someone, all you have to do is ask for their pronouns.”

Are sex and gender the same?

Sex assigned at birth (male, female, or intersex), gender expression (general appearance), gender identity (how you feel and see yourself) and sexual orientation (sexual and emotional attraction) are all different things.”

We talked for a while. What I learned is that the transgender community is diverse and complex, coming from every region of the United States and around the world, from every racial and ethnic background, and from every faith community. This means that different members of the transgender community have different needs and priorities. Similarly, there is no one right way to handle every situation, or interact with every trans or gender non-conforming person. Be respectful, do your best, and keep trying. You don’t have to understand someone’s identity to respect it. Amid the Covid-19 pandemic, there’s just no way to facilitate in-person festivalsfor the foreseeable future, but Carrboro Mayor Lydia Lavelle suggests we try something new.

“During Pride Month this year, we need to recognize the achievements and continuing challenges facing the LGBTQ+ community in a different way. We can issue proclamations and resolutions, enjoy visual displays, and search for social media offerings and programs throughout the month. However, we also need to acknowledge that our vulnerable communities are especially challenged in times like these, and commit to reaching out to those that might need us now more than ever.”

The legacy of the leadership that has guided our towns and university through some of America’s most fractious and divided times is here still today in our openness to accept and even elect those who are judged, spurned, and devalued elsewhere. It’s a powerful testament to the history of an openness to change, and a desire for justice. And that, even though right outside our doorstep we have one of the best universities in the nation, sometimes we have to educate ourselves.

Be the first to comment on "June is Pride Month"