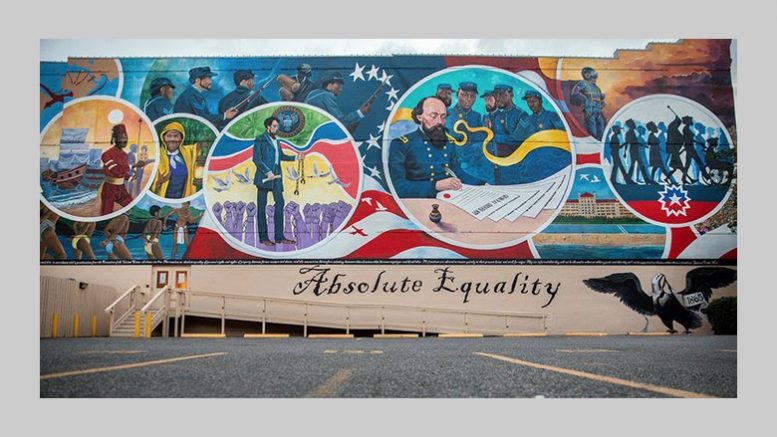 A 5,000-square-foot mural in Galveston, Texas, at the spot where Gen. Gordon Granger issued the orders that resulted in the freedom of more than 250,000 enslaved Black people in the state.

Juneteenth commemorates the day the enslaved people in Galveston, Texas finally received the news that they were free. The news came two years after President Abraham Lincoln’s Emancipation Proclamation, on June 19, 1865. Former Chapel Hill, NC Mayor Howard Lee stands next to a 1970s photo of himself at the Chapel Hill Library.

Flash-forward almost exactly 100 years, to Chapel Hill in 1969. That’s when Howard N. Lee was elected mayor of this town. In so doing, he became the first elected African American mayor in a predominantly white southern town since Reconstruction. Few know he was elected two more times, in landslides. Voters were given the opportunity to change the town’s leadership and direction twice, and they chose not to.

This was an important milestone in race relations in the South. But for many Black Americans, celebrating Juneteenth feels hollow when in 2021 there are those who don’t believe that Black Lives Matter.

Howard Lee believes that Juneteenth should be a federal holiday, an annual celebration that deserves to share the same symbolic significance as Memorial Day and the Fourth of July. “Those two days in May and July allow us to reflect on where we as a nation started and the progress we have made toward becoming a more perfect union,” said Lee. Juneteenth embodies the canon of old history and the ongoing struggle for civil rights.

When asked what Juneteenth means to him, Howard says:

“Juneteenth represents the sharing of the weight of slavery and the true beginning of America being freed from the image of being a slave nation. While we still struggle to protect, guarantee, and celebrate freedom for all, Juneteenth embodies the canon of old history and the ongoing struggle for civil rights. It also symbolizes that the more conditions change, the more circumstances seem to remain the same.”

Lee knows a few things about fighting for change in our Country and in Chapel Hill.

A native Georgian, Lee moved to North Carolina in 1964 to attend the University of North Carolina. Graduating with a master’s degree in social work in 1966, he was hired to direct a research program at Duke and settled into a home in Chapel Hill’s Colony Woods neighborhood. When a cross was burned on his front lawn, Lee decided to enter local politics. The 1969 mayoral election saw a record 4,734 votes cast, and, at the end of the day, Lee defeated former newspaper editor Roland Giduz by 400 votes. “Many national policies today mandate equal treatment,” Lee says, “yet Black people remain disproportionately targeted by the police, denied equitable access to healthcare, are under-represented in local, state, and national positions of power, face voter suppression, and more. Juneteenth allows us to acknowledge and learn from history or remain enslaved by it. Unfortunately, far too many choose to be guided by the ugly parts of our history and try to keep those aspects of history from being told.”

Lee talks about what he calls the “divisive mindset that is the reluctance to grant tenure to Nikole Hannah-Jones because of her work on the 1619 Project, the goal of which is to reframe American history by considering what it would mean to regard 1619 as our nation’s birth year.

“Such recognition would require that the consequences of slavery and the contributions of Black Americans be recognized as a major part of who we are as a country.”

Lee says Juneteenth “should be embraced as an opportunity for all of us to unite in our demands for progress, and to make a special effort to fight against oppressive behavior exhibited by State legislatures.”

Lee is hopeful that as we emerge from being enslaved by COVID-19, we should appreciate and value our freedom more than ever. Juneteenth allows us to acknowledge and learn from history or remain enslaved by it. Retired Judge Carl Fox talks with local author John Grisham.

“This JUNETEENTH 2021 let’s celebrate and welcome the opportunity to engage in a vigorous and stimulating discussion reflecting on our past, highlighting the progress we have made bringing us to our present, and asking the question, why can’t we all get along? Then, let’s act. Let’s move toward our future and the future of generations to come together, in the name of freedom.”

How do we measure progress? This is the question Juneteenth gives us an opportunity to ask. It’s a day to celebrate the movement toward the goal of harmony and equality. It’s about how far we’ve come and how far we have to go.