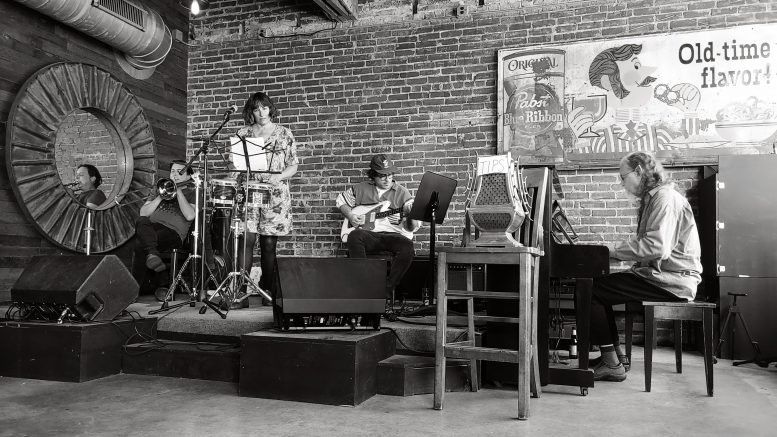 “We don’t have a sign because we’re called ‘Speakeasy,’ said Norm Underwood, the general manager of Speakeasy on Main in downtown Carrboro. “It’s a word-of-mouth kind of thing.” The live music venue and bar, which opened last November in the space formerly occupied by The Speakeasy at Tyler’s, sits at a prime address, with historical roots dating back to the Town’s beginnings when it was known as “West End” or even “West Of,” as in “West of Chapel Hill.”

Underwood knows the significance of the location, “This is the main downtown block, we’re at 100 [South] Greensboro, and 100 [East] Main Streets.” He mentioned that in the early 1920s the building housed Hearn’s Grocery. A 1924 fire wiped out Carrboro’s original business district, and its wooden frame buildings were replaced with the brick structures seen today.

The inside of the venue is mostly wood, which provides a good acoustic environment for music performance. Underwood’s renovations to the venue include extensive interior painting, upgrades to the bar (including a Bottoms Up kegerator which fills glasses from the bottom!) and a new stage and sound system. He also brought in a Yamaha piano.

Rob DeMauro, who books jazz, blues and rock ‘n’ roll acts for the venue, said he likes the fact that there’s plenty of comfortable seating for patrons and, “the bar is separated from the performance room,” which is not that common.

The bar can be entered from a side door, next to Neal’s Deli, while the double wooden front doors lead into the performance room, which has large garage door windows that can be opened to allow the music to spill out onto Main Street. There’s interior access between the two spaces as well.

This spring, veteran local vocalist Katharine Whalen and her JazzSquad (Whalen on vocals/percussion, Danny Grewen on trombone, Austin Riopel on guitar, and Robert Griffin on piano) will be in residence at Speakeasy, playing a cocktail hour set from 5-7 p.m. on several Sundays in April and May.

Whalen describes JazzSquad’s repertoire as, “Hep East and West Coast jazz standards from the 1930s to the 1960s.”

During a break at her first Sunday performance March 20, Whalen greeted and joined the crowd and some friends. She mentioned how much she and her band mates enjoyed the piano at the back of the house facing the stage, which enables the performers to hear and respond to every nuance from the piano’s soundboard.

Whalen has been making music in the Triangle for several decades. “I started with banjo and singing at the same time when I was about 23,” she said. In 2020 she was inducted into the North Carolina Music Hall of Fame. JazzSquad moments during a March 20 set at Speakeasy on Main. Photocollage by Pamir Kiciman.

Known for her sweetly raspy and lulling jazz vocal style, Whalen is a multi-instrumentalist who plays tenor guitar, four-string banjo and baritone ukulele and occasionally a cocktail percussion kit consisting of bongos and cymbals.

JazzSquad is only one of Whalen’s various musical endeavors. “I have so many groups because I really enjoy all of them so much and could not settle on just one project!” she confessed. Her current projects are JazzSquad, together with Certain Seas (indie folk pop) and Brandy Rambles (electric country folk rock).

Whalen sings jazz standards but in her own songwriting she tries to make each song universal. “[I] always put in one very true thing about myself,” she said. “For example, I have a lyric that says, ‘the dinosaurs make me really sad,’ which is a leftover childhood reaction to that section in the Fantasia Disney movie.”

Whalen also finds songwriting inspiration in her everyday encounters. “Lyrics come to me often as overheard conversations,” she said. “Or I will mumble along to a melody I’m playing and then record it and listen back to hear what it was telling me. This method is very effective.” She sees music as a process of continuous learning and exploration. “I try and improve and school myself by learning covers that catch my ear; these sometimes end up in a set too,” she said. “I love making music videos and use them as a tool to further express the intentions of a particular song.”

There’s also a bar dog named Hickory who is adept at sitting up on the venue’s chairs.

While the Speakeasy is a bar, it aims to be a live music venue. There will also be a lot of music on tap in the coming months and Underwood hopes to offer an eclectic mix of performances. “We’re not limiting acts to one type of music,” he said. “We’re doing a lot of jazz, but we have touring bands, Nashville bands and ‘punk’ bands too.”

In addition, DeMauro plans to host a workshop-oriented singer-songwriter event and to offer use of the stage to other local musical groups, such as a local choir coming in for a performance.

Robert Griffin, who plays piano in JazzSquad, has his own residency at Speakeasy, and Whalen’s bandmate Danny Grewen plays there with another jazz outfit named Yeaux Katz.

Finally, Whalen herself hopes to also bring her other bands, Certain Seas and Brandy Rambles, to the Speakeasy “for a fun weekend night bash!”

JazzSquad’s March 20 performance was received enthusiastically by all in attendance. Whalen’s signature authenticity, her laid back, swampy, ole-timey groove and consummate musicianship were on full display. Speakeasy views. Center: Speakeasy sign inside. Clockwise from top left: Patrons Mona Couts and John Williams with their beagle Cooper, bar dog Hickory getting snacks from Williams, bar section of Speakeasy, and Hickory on one of the chairs in performance room. Photocollage by Pamir Kiciman.