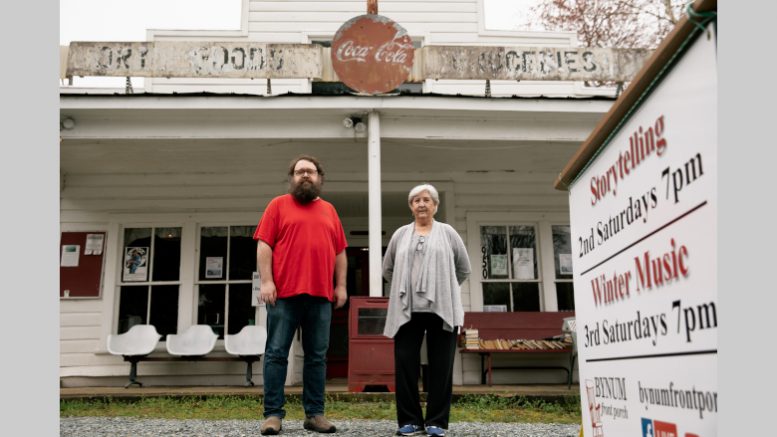 Chuck Leippe (left) and Martha Collins (right) pose for a portrait in front of Bynum General Store in Bynum, North Carolina. Home to an arts and entertainment nonprofit organization, Bynum Front Porch, the building was closed to the public due to the COVID-19 pandemic.

BYNUM, N.C. — The air is humid and thick with the smell of OFF! Deep Woods bug spray.

People from around Chatham County, and some from around the state, grab a bite to eat from a local food truck, then settle in to their lawn chairs in the small field outside of Bynum General Store.

On a good night, as many as 500 people will squeeze into the grassy area next to the 85-year-old building. Latecomers will be hard-pressed to find a parking spot on the two-lane road where the store sits, just off U.S. Highway 15-501 in the former cotton mill town on the Haw River.

Everybody knows everybody, but if you’re new, it won’t be long before lifelong Bynum resident Martha Collins spots you in the crowd and gives you a warm welcome.

Right at 7 p.m., a band takes the stage, and the music starts.

The series generally features bluegrass, old-time and Americana bands, and along with a regular storytelling show and other music programs, it funds the organization’s community engagement efforts and helps provide educational grants to Chatham County high school students.

Arts and entertainment nonprofit organizations have been especially hard-hit by the pandemic.

And for organizations like Bynum Front Porch, that are dedicated to sharing and promoting folk performing arts, the pandemic has led to a year of creative problem-solving, reimagining the way that folk songs and stories are shared—and keeping them alive for generations to come. Although the building was originally a general store for the Bynum community, the interior has now been renovated for a multi-purpose space, including a library where community members can leave and take books as they please.

People have been telling stories at Bynum General Store since the day it opened in 1936.

Martha Collins, who now serves on the board of Bynum Front Porch, remembers men, mostly millworkers, sitting outside the store before or after she caught the school bus, talking about their lives and telling far-fetched “fish tales.”

Those stories and many others, which have historically been passed down by word of mouth as a form of folklore, take centerstage in Bynum Front Porch’s monthly storytelling show, which started about a decade ago and generally runs from September to May.

In the past, the series has hosted world-renowned storytellers, such as Donna Washington, to tell stories in-person.

But like so many performance events, the storytelling show went virtual in 2020.

On any given Saturday night during the pandemic, Cynthia Raxter—who board member Chuck Leippe describes as “the storytelling guru of Bynum” and is a member of the North Carolina Storytelling Guild—clips a microphone to her shirt and hosts the show live from Bynum General Store.

Raxter is generally a one-woman show in front of the camera, but behind the scenes, Leippe and a crew of other volunteers monitor the video and sound quality using equipment the organization purchased with the help of an almost $8,000 grant from AARP.

With the pandemic making travel more difficult, storytellers join Raxter virtually, telling their stories via Google Hangout or Zoom to the audience at home.

Although the show uses 21st century technology to reach people down the road in Bynum and as far away as Germany, the act of telling and listening to folk stories transports viewers back to a simpler time.

“When we’re having storytelling or we’re having music, what we’re trying to do with the livestreaming is sort of like a modern-day version of when a family would sit around a radio and listen to a radio program on the weekends or at night,” Leippe said.

And while telling stories to a computer is something ancient storytellers probably never imagined, that doesn’t make the experience any less important or meaningful—in fact, it’s allowing the stories to live on in a more permanent way that traditional, in-person-only storytelling doesn’t. Bynum’s Front Porch hosts a series of concerts that serves as a space where beginning bands start their performance careers.

“It’s actually a good thing to record people and to do these shows like this, because it does record them,” Leippe said. “We can look at them 25 years from now, and the person is long gone, but the story they’re telling is still relevant.”

PineCone, the Piedmont Council of Traditional Music, is a Raleigh-based nonprofit organization that has been preserving and promoting traditional music and folk performing arts since 1984.

Traditional music purists might say that the right way to learn a new instrument is by playing “knee to knee,” building a musical conversation between two musicians as they play fiddle tunes in an intimate setting.

Brower learned to play the fiddle by watching videos on YouTube, well before the pandemic made virtual music lessons a necessity.

“You know, if Mozart had a computer, he’d be using a computer,” Brower said.

That idea has been at the center of PineCone’s programming throughout the pandemic.

PineCone defines traditional music as any type of music that delivers authentic voices and stories through song. While the specific genres range from bluegrass to jazz to gospel, there is a key element at the center of them all: community.

In a normal year, PineCone makes traditional music accessible to the masses by hosting in-person music workshops and free concerts. The organization is the local host for the International Bluegrass Music Association’s annual “World of Bluegrass” festival, an event that brings more than 200,000 people to Raleigh and generates more than $14 million in revenue for the city.

But with the pandemic preventing in-person gatherings of any considerable size, Brower and the PineCone team decided to focus on participatory programming, which they believe is better suited for the virtual environment than concerts.

Now, on any Wednesday night, about 35 experienced and beginner musicians log on to Zoom to learn about bluegrass and folk music from some of North Carolina’s most seasoned performers.

Like Bynum Front Porch has recorded folk stories, PineCone has also recorded many of the organization’s virtual workshops, creating a catalog of lessons that can be used to teach future generations the art of traditional music, even after in-person events resume.

But even with recordings available for posterity, both the board members at Bynum Front Porch and Brower at PineCone are eager to return to in-person programming—a key to the heart and soul of each organization.

“One of the things that has certainly been tried and tried and tried is to treat the internet as a new venue,” Brower said. “The internet is not a place, it’s not a replacement for us coming together. It’s a totally different kind of experience.” Although Bynum Front Porch has found ways to survive in an era of social distancing and online events, the building still requires updates and maintenance, such as the installment of an air conditioning system.

Bynum Front Porch expects to be able to offer in-person events this summer, bringing the Front Porch Music Series back to the field outside the general store.

Martha Collins will resume her role as the unofficial greeting committee for new attendees, though she’ll probably have a mask on this time.

The smell of OFF! Deep Woods bug spray will fill the air once again.

And the music will play on.

Another Taste of India

Be the first to comment on "Keeping Songs and Stories Alive, One Year In"