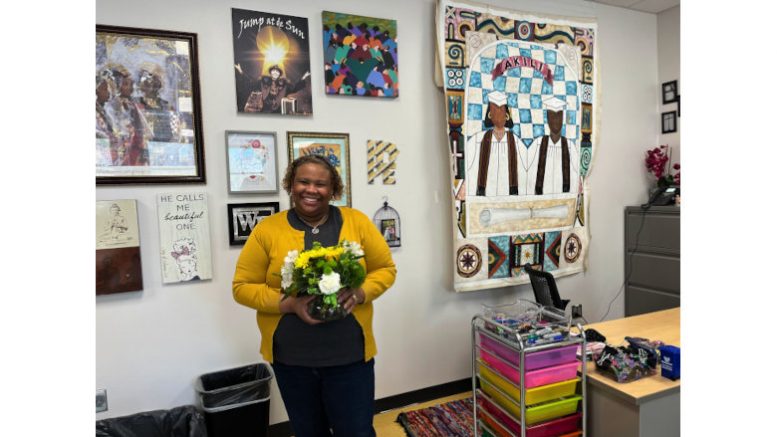 English teacher Kimberly Jones, who has taught at Chapel Hill High School since 2006, was voted by her colleagues the 2022 Teacher of the Year. Photo by Evren Centeno.

By Whitby Alexander, The Proconian.

English teacher Kimberly Jones was recognized as the school’s 2022 Teacher of the Year, a title the district awards to teachers who “represent exemplary performance as a member of the teaching staff of the Chapel Hill-Carrboro City Schools.”

Jones, who has taught 10th grade English at the school since 2006, was nominated by fellow English teacher Michael Irwin and received the award after she received the most votes by the school’s faculty and staff.

Jones said that there is a place for every student in her classroom and seeks to accommodate the differing educational needs of each student, which entails providing scaffolds for students who need more support, praise for those who excel with the curriculum and rigor for those who exhibit higher levels of comprehension.

“I try to present my curriculum in a way that is accessible for all students,” she said. “I try to build my lessons in ways that have low floors, but high ceilings.”

Jones strives to incorporate content into her lessons that stresses equity and inclusion, while exposing students to the experiences of oppressed people and groups. Her curriculum thus includes units on the Holocaust, magical realism in Latin and South America and literature from Black writers and poets like Chimamanda Adichie and James Baldwin.

Jones also wants to challenge her students to think critically and outside the box.

“I want [my students] to interrogate ideas,” she said. “I want them to examine their own beliefs and let those new ideas rub up against what’s already there and hopefully evolve a bit.”

Jones earned her undergraduate and graduate degrees from Wake Forest University, where she did not have one Black professor and was one of the few Black individuals at the institution.

“These people are some of the best and brightest, but, because they hadn’t had diverse educators, they simultaneously had some really problematic ideas and concepts surrounding race and ethnicity and really limited exposure to people,” Jones said.

This experience played an important role in her decision to teach at Chapel Hill High School.

“Chapel Hill is a high performing school with really great community investment, but with lower diversity in its teaching population, so that’s why I chose to come to this area.” Jones said. “It’s for education, it’s a college town, and I had amazing support from parents, but we needed more teachers of color in the district.”

Irwin has taught alongside Jones since she began teaching and emphasized her brilliance as an individual and as a teacher.

“She is incredibly insightful and has a very unique talent to be able to make curriculum culturally relevant,” Irwin said. “She helps kids see the connection between what it means to be a 15- or 16-year-old and how that applies to the text and stories that have diverse themes that we read across 10th grade.”

English teacher Joanne McClelland mentored Jones when Jones first came to Chapel Hill High School and said she was struck by Jones’s intelligence and passion for teaching, as well as her colleague’s self-assuredness.

“One thing I admire most about Mrs. Jones is how proud she is to be a Black woman,” McClelland said. “She knows who she is, and she is breaking the stereotypes of what an educator should look like.”

Sophomore Katherine Omba, one of Jones’s current students, also sees her teacher as an “outgoing, optimistic, and strong woman.”

“Mrs. Jones is an amazing teacher,” Omba said. “She combines all types of learning in her classroom; sometimes she lectures, other times we are watching videos and taking notes, and when we read plays, she animatedly plays the roles.”

Sophomore Crystal Soong feels that Jones’s enthusiasm for learning has helped her to feel more engaged and confident in class.

“She makes all of her lesson plans engaging and fun and does a great job of explaining things,” Soong said. “She is very energetic and you can see that she loves teaching and her job.”

The Healing Power of Artmaking and the Creative Life: Part II