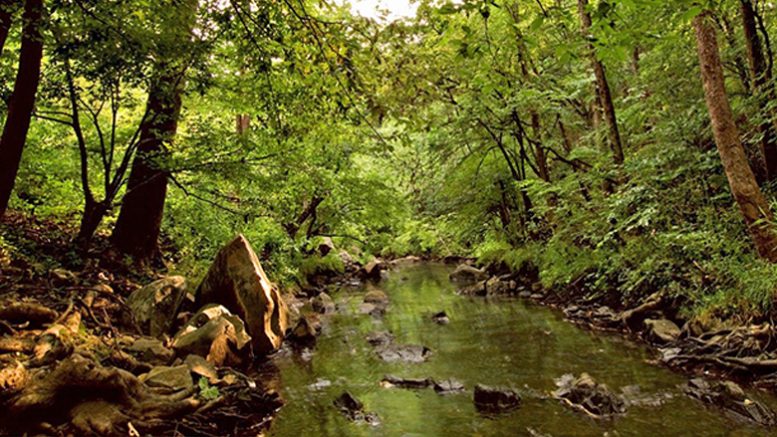 One of the most ecologically diverse and stunning neighborhoods in Chapel Hill, the area known as Kings Mill-Morgan Creek, has been home to all kinds of celebrities, from Dean Smith, who invented basketball as we know it, to singer/songwriter James Taylor, who reinvented what it meant to be a singer-songwriter. His lovely song “Copperline” was inspired by Morgan Creek, the neighborhood he grew up in. And so many doctors and medical faculty live there that at one time it was called “Pill Hill.” Joining this iconic procession is another, equally remarkable man, Paul Jones.

But first, a story about how these neighborhoods got their names.

The Kings-Mill-Morgan Creek neighborhood was developed in the 1950s and 1960s on land owned by Dr. William Chambers Coker, his university colleague Henry Roland Totten and William Lanier Hunt. But the name Morgan Creek has roots that go much farther back than that. It comes from the family of Mark Morgan, a settler who came from Pennsylvania in pre-Revolutionary War days to farmland he purchased from — of all people — the Earl of Granville. According to legend, his first residence was in the hollow of a giant sycamore tree near the banks of the creek, a story we chose to believe.

Morgan eventually became a wealthy planter and was one of ten landowners who donated land for the establishment of the University of North Carolina in 1792.

Kings Mill Road takes its name from a grist mill which once existed on Morgan Creek. The millstone from that very mill has been recovered and now stands at the entrance to the herb garden at the nearby North Carolina Botanical Garden.

The names of these neighborhoods span centuries.

But it’s been modernized – literally. About 24% (39 out of 160) of the houses in Kings Mill-Morgan Creek neighborhood are considered “Modernist,” mostly built in the 1950s and 1960s. Many are surprised to learn that North Carolina has more Modernist homes than anywhere other than Los Angeles and Long Island.

Paul Jones is the director of ibiblio.org, a contributor-run, digital library of public domain and creative commons media at UNC-Chapel Hill. It was originally known as SunSITE.unc.edu, one of the first World Wide Web sites in North America. After serving more than forty years in information sciences, he will officially retire on June 30.

“The large wooded lot, next to Merritt’s pasture, reminds me of where I grew up in Charlotte, near Freedom Park,” says Paul Jones. “And I love the modernist houses. I’m living in the kind of house I always wanted, but never had a chance to have.” Says Paul’s wife, Sally Greene: “Paul’s Twitter name is smalljones. He is small and self-effacing, but among internet pioneers and innovators here and abroad, his presence is large. His transition from professor to poet and writer is going to be seamless, because the same creative impulse drives all his thinking.”

Jones has been a seminal contributor to the digital revolution: publishing papers and lecturing on open source software, social networks, new journalism and new media, as well as citizen journalism and poetry.

Many friends bet that Jones will get much more involved with the NC Poetry Association once he retires. He currently serves as a Board Member. As a Board Member at North Carolina Poetry Society, Paul Jones looks forward to dedicating more time to his love of poetry.

The Chapel Hill area is lucky to have great neighborhoods like Morgan Creek and great creative leaders like Paul Jones. Both have a fascinating history, and offered many people numerous opportunities for creativity, diversity and mobility. University Place in Chapel Hill is Open for Business

Be the first to comment on "Kings Mill-Morgan Creek: Great Neighborhoods, Great Leaders"