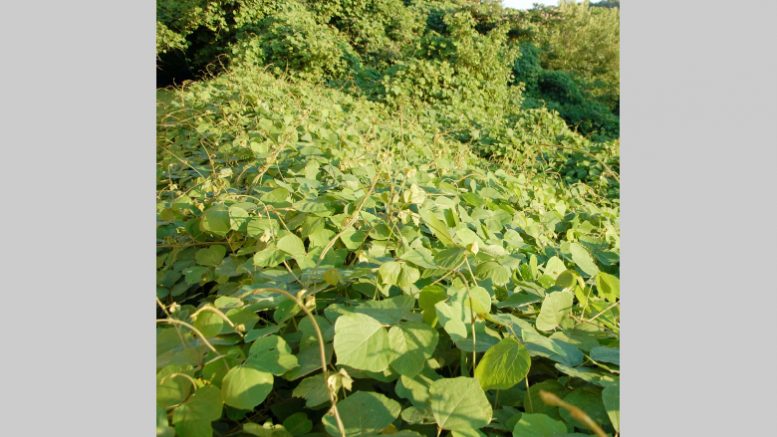 Kudzu covers everything in its path.

Kudzu strikes terror in every good Southerner’s heart. Few of us doubt the myth that it can grow half a mile per day. Yet, when the Japanese brought it over as a present in celebration of America’s first centennial in 1876, their intentions were good ones.

The South faced an erosion crisis between 1935-1942. Consequently, the Soil Conservation Service advocated the planting of kudzu in an effort to maintain the topsoil. Members of the Civilian Conservation Corps managed to plant millions of kudzu crowns and seedlings during this period. The Department of Agriculture actually paid landowners $5-8 an acre to plant kudzu. In a nation still reeling from the effects of the Great Depression, this was a hard offer to reject.

By the late 1940s, the bloom was off the rose. Kudzu jungles are hard to tame. Despite the fact that the vine could literally eat up houses, the Department of Agriculture only removed kudzu from its list of recommended cover crops in 1953. By 1960, the center of attention changed from cultivation to eradication. In 1970, it officially obtained weed status, with it becoming a designated noxious weed in 1998.

During its growing season, kudzu, searching for a means of support, easily grows one foot a day. In Asia, natural predators such as wood borers and cutworms keep a rein on kudzu, but the U.S. lacks these predators. With its long summers and mild winters, the American South provides a perfect climate for kudzu, whereas harsher Asian winters help to keep the vine in check.

So how should landowners get rid of their kudzu? There is, alas, no perfect answer:

The story of kudzu in the U.S. is really one of mismanagement. We intentionally planted kudzu, even when there were plenty of warning signals. Right now, there are no biological controls for this invasive plant and no native plants that can compete with it.

Let’s hope that we can learn from this lesson in willful human negligence.

Correction: In our recent column “A Tale of Olive Oil,” we need to rectify two erroneous sentences. California olive oils do not constitute 2 percent of the world’s production. That statement should have read 0.05 percent of the world’s production. Joseph Profaci, the executive director of the North American Olive Oil Association, informed me that “Product of Italy” refers to the origins of the oils in the bottle, meaning that the olives were Italian olives.

He also states that the UC Davis report was a flawed one. My research was based on Tom Mueller’s “Extra Virginity: The Sublime and Scandalous World of Olive Oil,” an interview he had with Sally Errico in The New Yorker and an article Julia Moskin wrote for The New York Times. While I referred to the UC Davis report as cited by Tom Mueller, I did not read the report so I do not have an opinion as to its validity.

Getting Back to Basics: Why Do We Garden?

Have the Courage of Your Gardening Convictions

Be the first to comment on "Kudzu: A Tale of Woeful Mismanagement"