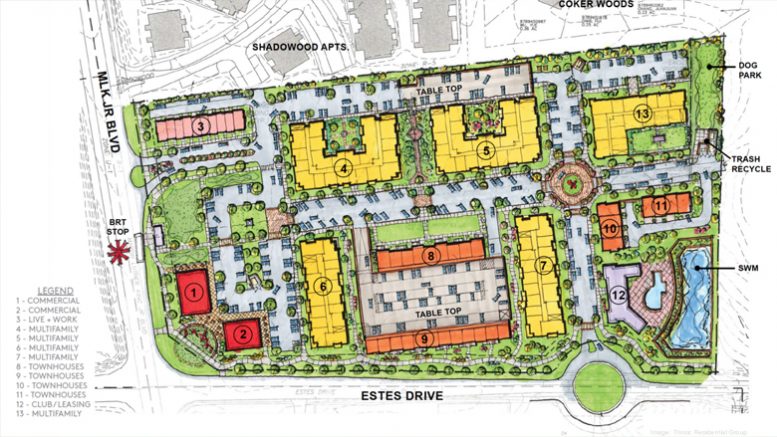 Chapel Hill’s Community Design Commission has reviewed a concept plan for a development that would bring hundreds of residential units plus retail and office space to the corner of Estes Drive and Martin Luther King Jr. Boulevard.

The review of the new Aura development elicited both negative comments focused on traffic, safety and stormwater along with praise for the planned shopping area and the inclusion of affordable residential units.

The fifth development proposal in the last nine years for the corner 14.7 acre tree farm site, Aura would add 365+ residential rental units, made up of apartments, including up to 60 affordable units, and townhomes. In addition, there would be 36,250 square feet of retail space, 40,000 square feet of office space, 3,000 square feet of amenity area and parking for approximately 637 cars.

“The site is fundamentally unique to Chapel Hill, given the size of the tract and proximity to the university, [and] we want to do something that is the proper scale — this is not the Blue Hill District and we will not a build a Blue Hill type of project here,” Ryan Stewart, managing director of the Carolinas for Trinsic, the developer of Aura, had said in a media statement.

However, the farm’s application for development was a concern to some of the commissioners.

The Town of Chapel Hill has the right, but not the obligation, to deny development for three years after a tree harvest. Dan Jewell of Coulter Jewell Thames, PA, representing Trinsic, the developer of Aura, said he did not feel that would be a problem. It is likely, he said, that a zoning compliance permit would not be requested before that three-year period was up.

Jewell also said no student housing would be part of the development, with most of the units containing just one bedroom, and that “right now” there were no plans to include a supermarket in the commercial area.

In his presentation to the commission, Jewell further noted that a stream on the property has been designated as intermittent, and 50-foot buffers would be required. A water expert from Trinsic is analyzing the stream and should a different conclusion be reached, Jewell said Trinsic would appeal the determination to the state. The determination could affect the number of townhomes allowed as well as building heights in the development.

Chris Berndt, the CDC vice-chair, requested information from the developer about the airport hazard zone, with Horace Williams Airport directly across the boulevard from the proposed development. Jewell acknowledged that while the zone has been downgraded, with the airport now closed to the public, UNC medical helicopters were still landing there. In order for the development to proceed, he said that would have to stop.

A number of speakers at the review session were more concerned about ground traffic.

They pointed out that Estes Drive is now over capacity and that increased congestion would be a problem. Safety, they claimed, would be impacted as congestion would most likely impede emergency vehicles from reaching Azalea Estates, the new senior living development under construction, and both Philips Middle School and Estes Hill Elementary.

Some residents of the adjacent Coker Woods neighborhood said they were concerned about potential stormwater issues, but many residents praised the proposed shopping area, saying that it would provide a walking destination, and were pleased with the inclusion of affordable housing, which would have the same layout as the market-rate apartments and would be interspersed throughout the project.

The number of affordable units in the proposal has made it appealing to the local organization HOPE — Housing Options for People with Exceptionalities. HOPE has been seeking a developer that might be interested in creating an inclusive, mixed-income community where all, including those with developmental disabilities, can live meaningful and purposeful lives.

“I will be reaching out to the developer to see if there is any interest in working with us,” said Dotty Foley, the co-founder of HOPE. “We are pursuing all leads with developers. Finding a home for people with developmental disabilities can be challenging and it’s the easier part of the equation. An open-minded developer may be interested in sharing our vision.”

At the review, the CDC members commented to Trinsic about concerns that included the potential  significant increase in traffic, especially on Estes Drive and about buffers between the proposed development and the nearby Shadowood and Coker Hills neighborhoods, that were considered to be insufficient.

A number of comments also were made by members of the commission concerning “tabletops,” which are two layers of parking that would place apartments in back of them in shadow. Several commissioners advocated for underground parking instead.

The review also noted concerns about stormwater impacts to Coker Hills, the addition of impervious surface in the Booker Creek watershed, Aura’s appearance from MLK and adding trees along sidewalks to improve walkability during warm weather months.

The commission’s comments will be transmitted to the Town Council for the scheduled March 25 concept plan review.