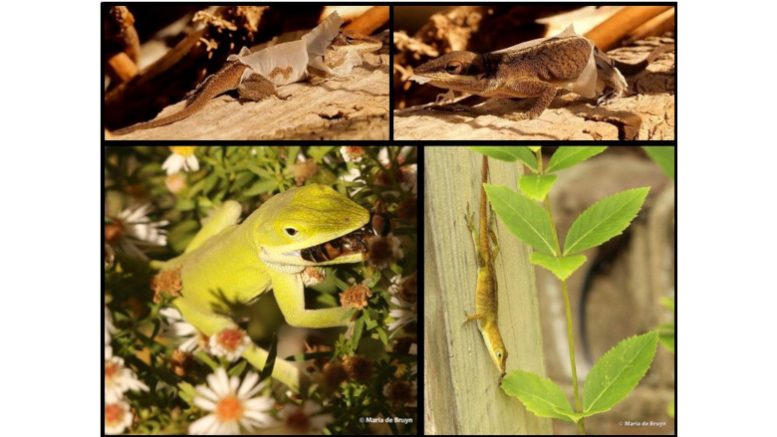 One of my favorite local reptiles is the Carolina anoles. These cute lizards can be seen year-round as they don’t hibernate. In my experience, however, they seem to be more visible in late summer and early autumn.

These reptiles, also known as green anoles, are the only anoles native to the southeastern United States. Green is nevertheless not their only color. You may encounter dark brown, light brown and green/brown anoles—and they might even change their coloring as you watch them.

Unlike chameleons, who change color to blend in with their surroundings to hide from predators, anoles change their skin hues in response to stress or their mood, when they are active or when they want to defend a territory. Darker colors may indicate that they are feeling cold or stressed out.

Full-grown males are larger than females, but you can also guess their sex based on anatomical features. When males hope to attract a female for mating, they display a brightly colored reddish flap underneath their jaws called a dewlap. When a female sees it, this may induce her to ovulate. Males also show their dewlaps when defending territory against other males.

Female anoles can often be distinguished by a row of white markings along their spine, which most males lack. Like other lizards, anoles regularly shed their skin. Observation last year taught me that they may also eat that skin since this provides them with extra nutrients that may be lacking in their direct environment.

Their regular diet is varied, including flies, beetles, spiders, cockroaches, worms, ants, termites, moths and butterflies. Seeds and grains can form part of their meals as well.

Carolina anoles are known as arboreal lizards because they spend a lot of time in trees and shrubs. From a higher perch, they can survey their surroundings. Climbing up shrubs and trees can also help them escape from predators that cannot follow them because they lack the foot pads that enable anoles to ascend vertically. Other predators, such as tree snakes and larger lizards, can catch them if they are quick.

Sometimes, a predator may catch a green anole by the tail and the anole escapes by “dropping” its tail—a defensive behavior known as caudal autotomy. A new tail will grow but will be weaker as it contains cartilage instead of bone and often will not be as long.

Recently, I learned that birds also hunt anoles when I photographed a blue jay that had caught one. Other birds in our area that go after them include kestrels and bluebirds. The Carolina anoles usually live about 2 to 8 years. A few who live around my front porch sometimes approach me closely and it’s noticeable that they are watching me, too. Another one decided that an unused bluebird nest box was a good place to hide from predators, but obviously not during nesting season!

If you would like information on how to create habitats that can harbor anoles and other native reptiles and amphibians, check out this information site: Reptiles and Amphibians in Your Backyard. A few more photos of the anoles are in my latest blog.

To feed or not to feed — is that the question?